Above photo: Residents of Catia in Caracas, Venezuela describe their community food production. They grew 17 tons of food in 2018. By Margaret Flowers

Workers World managing editor John Catalinotto on March 16 interviewed Sara Flounders, co-director of the International Action Center. Flounders is in Caracas, Venezuela, as part of a solidarity delegation of a dozen anti-war leaders from all over North America, organized and sponsored by the U.S. Peace Council. Members of the delegation arrived in Caracas on March 9 and 10. As of March 16, they are still there, after American Airlines canceled their flights. A full list of the participants can be found at the end of this article. 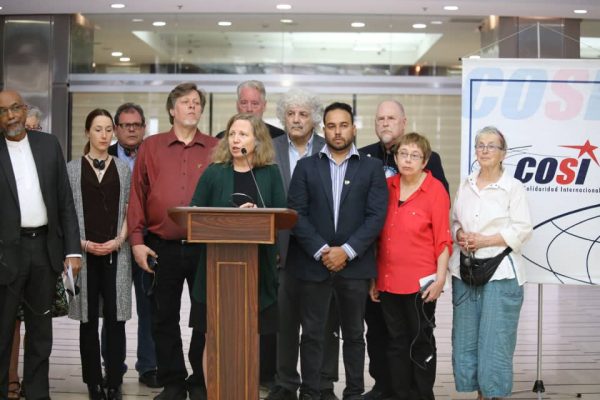 Workers World: Washington claims there is a “humanitarian crisis” with people starving in Venezuela. What have you observed?

Sara Flounders:  Our delegation made a short video today to talk about the situation of the people we have seen here in which everyone said that life in Caracas is going on. People were eating ice cream in the street. No one looked skinny, let alone starving, and people were treating each other with respect.

The danger that still exists, as Eva Bartlett pointed out, is from the continued threats and actions by the U.S. government that disrupt Venezuelan society, plus the threat of military intervention. The people here are preparing for the next U.S. attack through their community councils, which are telling them to start storing food, water and batteries.

Our delegation is committed to mobilizing back in the United States for the March 30 anti-NATO demonstration in Washington, D.C., that is now focused on telling the U.S. government: “Hands off Venezuela.”

WW: You have been there during the power outage, right?

SF: Yes, naturally this created big problems here. It started on March 7 with sabotage of the power station. It seemed to be solved by the morning of Saturday, March 9, but then went out again. Even government ministries were without power.

Water can’t be pumped without power. There were long lines for people collecting water to drink, cook, wash and flush toilets. Water trucks went to street corners and to central distribution sites for emergency distribution.

By March 14, after one week, the government managed to overcome the cyber terrorism. When you think how in Puerto Rico it took months and months to recover from the hurricane damage, this was pretty amazing.

As important as the government’s quick repair was, however, it succeeded because the government and the population mobilized to resolve the everyday problems caused by the power outage. This mobilization also helped resist the rest of the sanctions and shortages the imperialist governments have imposed on Venezuela. 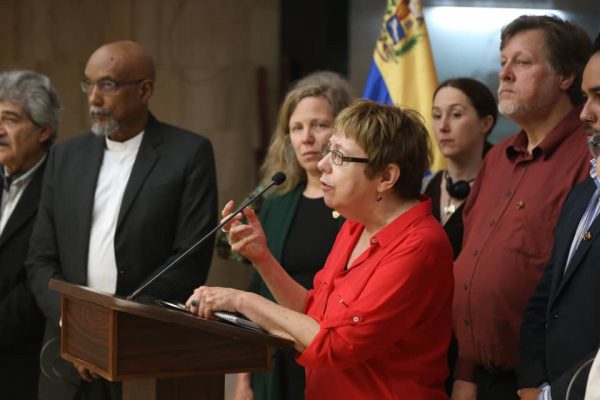 WW: Were popular organizations called into action during the outage?

SF: Community councils. First some background: Caracas is in the mountains. Cable car metros go to mountainous neighborhoods or barrios that surround downtown. This was a big accomplishment of the early days of the Bolivarian Revolution, to break the forced isolation in these working-class suburbs or shanty towns. We visited two of the larger barrios where it looked like there was 100-percent support for the revolutionary process.

Catia, for example, is a poor mountainside district with 1.5 million people. Its January 23 neighborhood is where the late president and revolutionary leader Hugo Chávez is buried at a fort/mausoleum overlooking Caracas.

So keeping everything running is based on the collective determination of the local community councils.

This has created a functioning popular power base or network throughout the country. There are many immediate problems to solve. Involving everyone in the problem-solving empowers the population and energizes people to see this as a historic challenge.

There are 500 communes. They are based in all the poor and working class communities and represent thousands of organized community councils. These coordinate their efforts to find workable solutions to the shortages that the imperialists’ internal sabotage has created in their efforts to create chaos and confusion.

People’s militias, which are armed groups from the masses, function through these organs of Popular Power and coordinate with the Bolivarian Armed Forces. Tenacity and determination is the watchword! 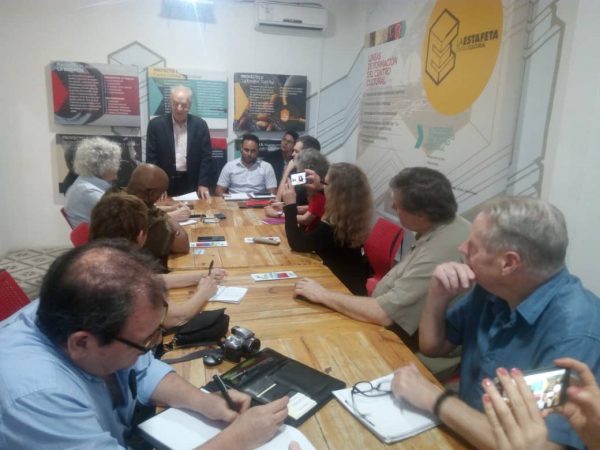 WW: Given the problems with inflation and the currency, how do the people, especially poor people, manage to get enough food?

Of Venezuela’s total population of 32 million, these 6 million families make up more than two-thirds of the people. Our young hosts in the solidarity organization here, COSI, need and rely on these basic supplies.

Of course, the government has to have the food in order for CLAP to distribute it. The economic sanctions and actual theft of Venezuela’s wealth have prevented the government from purchasing much needed food abroad. The longer-term solution requires producing more food at home.

That’s why our visit this week with the head of the Ministry of Urban Agriculture, Madeline Arias, and her staff was so fascinating. Totally organic gardens will produce 25 percent of Venezuela’s food needs this year, using backyards, empty lots, small greenhouses.

Venezuela plans small agricultural production that is 100-percent organic and sustainable, and that requires the latest scientific advances. The Venezuelans are learning from Cuban, Vietnamese and Korean experts in small agriculture solutions who have had to deal with near-famine conditions created by U.S. wars and sanctions.

The plans include up to one-acre gardens on rooftops and in backyards; up to three-acre gardens in empty lots. Also, fish farms are being developed to create more than 260 large fish ponds for protein and fertilizer. Rabbit raising is planned — it’s easy and clean, provides high protein, and you can feed the rabbits vegetable scraps.

There are other, larger local farming efforts that are also 100-percent organic. There is an all-out effort to develop urban gardens to provide low-cost vegetables and fruit. 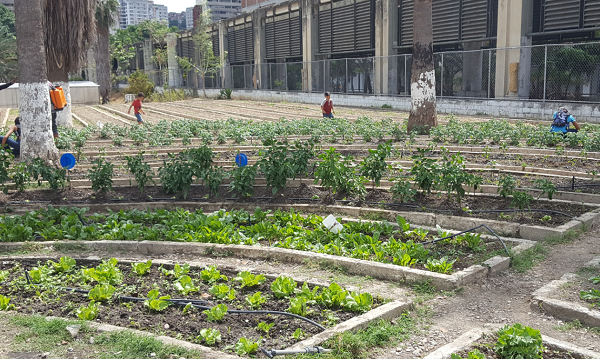 SF: Since 2016 the Maduro government has built 2.5 million new housing units all over the country, which can accommodate almost one-third of the population. This was also a big jobs program.

WW: When is the delegation returning?

SF: I was due back Friday night (March 15). Although life seems normal here, American Airlines has shut down its flights. All the flights out of Caracas are packed. I and some of the others might not return until Tuesday morning, March 19.

We had an excellent two-hour meeting with President Nicolás Maduro that just finished. Since we can’t return for a couple of days we will go to an anti-imperialist demonstration here in Caracas tomorrow. We’ll report on these soon, wifi permitting.