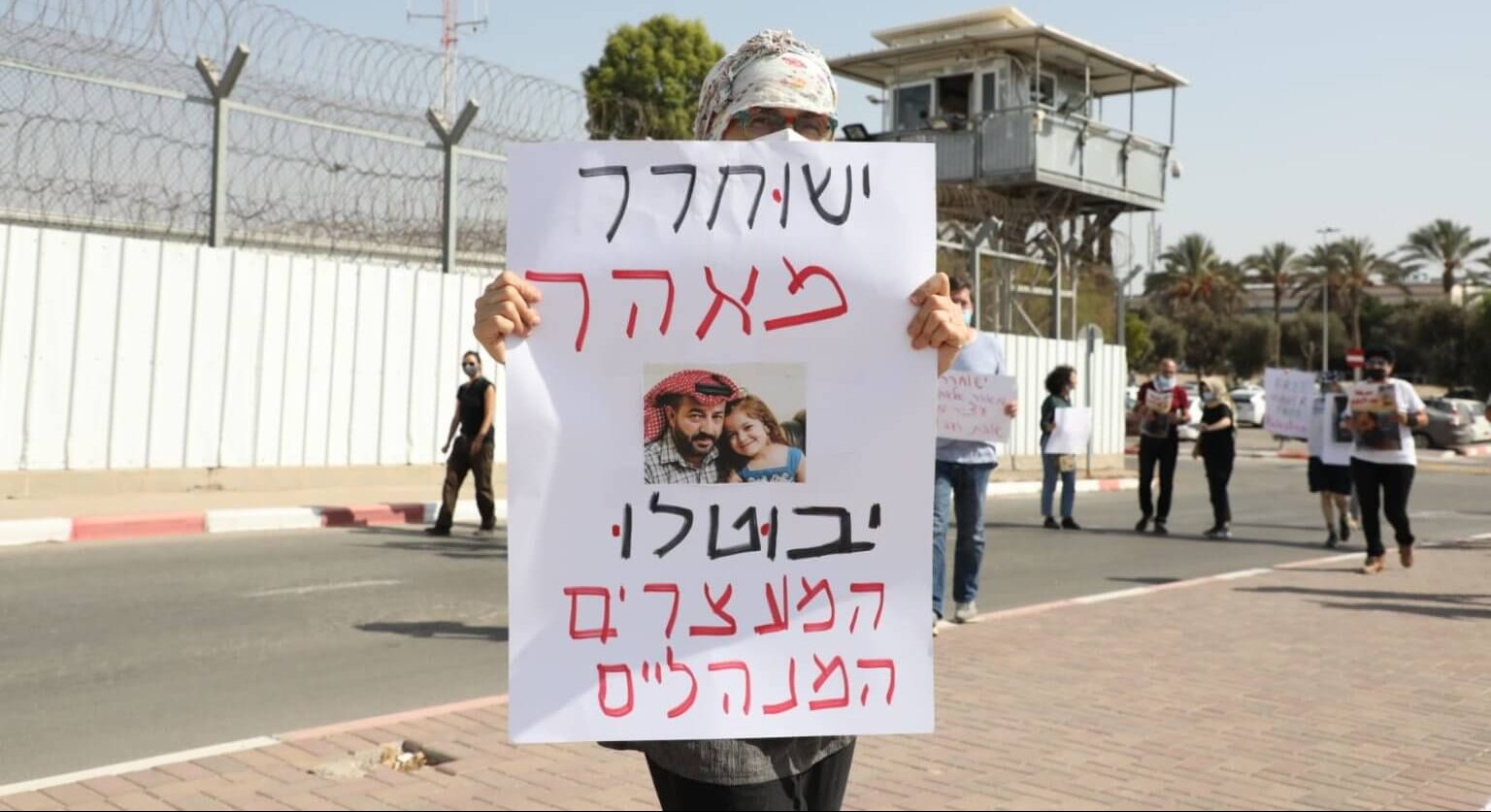 “My will to my people is to protect the homeland.” – Maher al-Akhras

Maher al-Akhras, who has been on a hunger strike since his administrative detention on July 27, is waging a battle against the mighty Israeli occupation apparatus.  Every day brings him closer to death, as Israel seems to be trying to prove through his case that the life of Palestinians, like their freedom and human rights, are worth nothing. But the formidable insistence of his hunger strike against the principle of administrative detention, and his determination that the strike will end only once he is free or becomes a martyr, is mobilizing more and more people to his support. On Friday, the 89th day of his hunger strike, it seemed that his Israeli torturers finally lost their nerve.

On the August 27, after he completed the first month of his hunger strike, al-Akhras was transferred from the Ofer military prison to the central clinic of the Israeli “Prisons Service” in Ramleh prison. It is an institute with a very bad reputation; the prisoners call it “a graveyard for the living”. On September 9, after farther deterioration in his medical condition, the prison’s doctors said they couldn’t treat him anymore and he was transferred to Kaplan hospital, a civilian institution in the town of Rehovot.

Al-Akhras continued his hunger strike and his body became ever more fragile. His lawyer, Ahlam Haddad, applied several times to Israel’s High Court to demand his immediate release. As usual in such cases, the high court’s judges heard the “secret accusations” against al-Akhras from the security services’ officers behind closed doors, without disclosing them to the prisoner or his lawyer. The court refused to void the detention decree.

However, on September 22, taking into account al-Akhras’ medical condition, they decided that in his current health condition he couldn’t constitute any “danger to state security”. On this basis they suspended his detention, but said that even though he was not a detainee, he was still not allowed to go to his home or to a hospital in the West Bank. This was to make it easy to renew his detention once his health improved.

On Friday, October 23, the occupation authorities informed al-Akhras’ lawyer that the Kaplan hospital was no longer willing to keep him, due to the fact that he refused their medical treatment, and also claimed that his visitors endangered other patients with viruses. With this, Israeli authorities renewed his administrative detention and al-Akhras was transferred again to the Ramleh prison clinic. This contradicted the High Court decision given on September 22, more than a month ago, that due to his medical situation al-Akhras didn’t constitute a danger. Since that hearing he had continued to be on a hunger strike, and there were clear medical reports outlining his deteriorating health to the point of imminent danger to his life or permanent damage to his body systems. It also contradicted the prison medics themselves who stated on September 9 that they couldn’t treat him.

Al-Akhras’s lawyer immediately turned to the high court again, asking to stop the prison authorities from moving him to the prison clinic (he had not been transferred yet), to abolish the renewal of the administrative detention, and to order his immediate release based on his deteriorating health. On Friday their struggle won a small victory when the court ordered to suspend al-Akhras’ transfer and leave him in Kaplan hospital until the deliberations were complete. The main plea is expected to be heard on Sunday, October 25.

On Saturday afternoon, al-Akhras’s family, including his wheelchair-bound mother, his wife, and three of their six children arrived in the Kaplan hospital to see their beloved son, husband, and father. They could only come from their home in Silat a-Dhahr, near Jenin, in the occupied West Bank, with a special security clearance.

The young girl is in tears over her father, Maher al-Akhras, a prisoner held without a charge since July. He has been on hunger strike for 90+ days and is on the verge of death.#FreePalestine pic.twitter.com/WnpIsnJcgv

But when they arrived, the prison guards surrounding the patients’ room prevented them from entering, even to have a glance of their dear one. His mother and his kids hadn’t seen him since he was arrested three months ago. Now, as there was an immediate danger to his life, this stubborn insistence by the guards was heart breaking.

The family and some of their supporters, including Knesset member Ofer Cassif from the Joint List, announced that they will be starting a hunger strike in the hospital until they are allowed to visit him.

Despite the harsh political conditions and powerful distractions, there is a growing wave of solidarity actions with Maher al-Akhras.

One week ago, on October 17, there was a demonstration in Haifa, called by prisoners’ support activists and by Herak Haifa. The main street of the German Colony was closed and one activist was arrested. On Monday there was a central demonstration called by the “high coordination committee” – the united leadership of all Palestinian parties and movements in the 48 territories – near the Megido prison in the north.

Supporters of Maher al-Akhras have taken the street by the Israeli consulate and the International Committee of the Red Cross office in New York to demand freedom for the Palestinian prisoner and “administrative detainee” as he begins his 90th day of a hunger strike for freedom. pic.twitter.com/gByk13UM1z

On Saturday morning al-Akhras’ lawyer visited him in the Kaplan hospital. She wrote down his words, describing Friday’s events and expressing his last wishes for his funeral and for the future of his people. Here is a translation to English of his words as she wrote them:

This report that I write is in the words of prisoner Maher al-Akhras, who has been on hunger strike for 90 days, when I visited him today, Saturday morning. He says:

“Yesterday 23-10-2020, at 12:00 a force of prison guards, security service agents, and hospital guards entered. They forced my wife to exit the room so I was left alone. Three prison guards got me out of the bed. I don’t know if it was on purpose or not, but they removed their grip and I fell on the ground on my face. Then they carried me and took me in a wheelchair to room 303 in the same department.

“At around 2:00 pm, from the intensity of anger of what happened, I felt a strong headache, stress in my heart and severe pain throughout the body, the first time I felt these aches. My whole body shuddered and I did not hear anything and did not see anything. The medical staff gathered around me. According to what I remember, I told them not to touch me, I do not want you to treat me, and not to approach me. I don’t know what happened after that. I just woke up with the doctor next to me trying to wake me up and it was 5:00 in the afternoon. Three hours passed while I was unconscious.

“Today I feel very weak, my body shivering and trembling. I hardly can focus, talk or see. I feel stress on my heart.

“Maher’s message and will:

“I ask that my mother, my wife and my children visit me.

“I do not want them to put me in the refrigerator and not to dissect my body at all, neither here nor in the West Bank.

“I want the veteran prisoners who wages the battle through hunger strikes and the families of the martyrs to carry my coffin.

“My will to my people is to protect the homeland.”

Amid the unbearable pain, the Palestinian administrative detainee, Maher al-Akhras finally gets to meet and hug his little daughter.

Al-Akhras has been on hunger strike for 91 days today, in protest against detaining him without any charges in the Israeli prisons. pic.twitter.com/T9NjrnYFLh