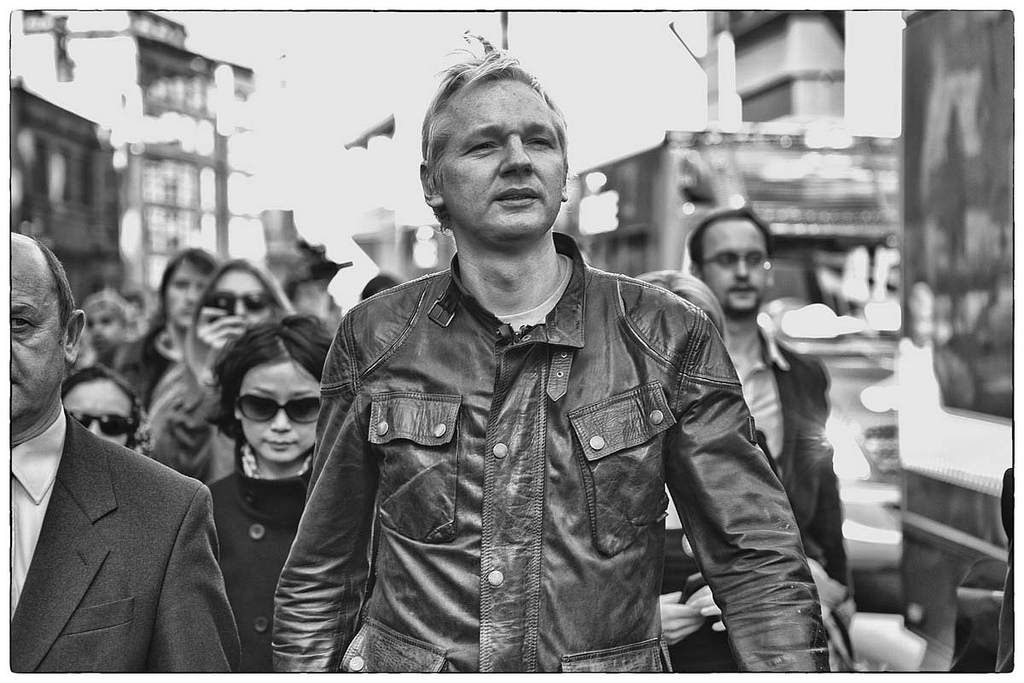 Above Photo: PRO The Naked Ape/Flickr

On June 19th at 11:00 am we will be holding a protest in support of Julian Assange at the White House. Please join us to call for an end to his persecution. Julian Assange stands for freedom of speech, press and the Internet in the 21st Century. Everyone who cares about these freedoms should speak out and take action on his behalf by joining the demonstration in Sydney, Australia on June 17 and the vigils being held in London and around the world on

June 19–the anniversary of when Julian sought asylum in the Ecuadorian embassy six years ago. KZ

June 6 will mark 10 weeks since the Ecuadorian government blocked all communication by WikiLeaks’ editor Julian Assange with the outside world, including personal visitors. Assange has been trapped inside the Ecuadorian embassy in London since 2012, when Quito granted him asylum in the face of a legal witch-hunt by the governments of the United States, Britain and Sweden.

Britain was moving to extradite Assange to Sweden on trumped-up allegations of sexual abuse as the first step in transferring him to the US to face charges of espionage, which carry a possible death sentence. Washington had vowed to punish Assange for having exposed before the world war crimes committed by the US in Iraq and Afghanistan as well as US intrigues against other countries.

In remarks last Wednesday, Ecuadorian President Lenín Moreno attempted to defend the silencing of Assange. He sought to deny—unconvincingly—that this action was the outcome of his government’s capitulation to pressure and threats by the United States.

Moreno put forward an Orwellian conception of freedom of speech that lines up entirely with the standpoint of American imperialism and every enemy of democratic rights. Renouncing WikiLeaks’ right—and the right of all journalists and media—to publish information that reveals government and corporate criminality or challenges official propaganda, the Ecuadorian president asserted: “There are two types of liberty. The responsible liberty and the liberty in which everyone thinks they can do whatever they want, whenever they want and however they want. That is not liberty. Liberty must be used with a lot of responsibility.”

Moreno stated that the WikiLeaks editor had to accept that the “conditions of his asylum prevent him speaking out about politics or intervening in the politics of other countries.” He threatened that if Assange did not submit to such terms, Ecuador would “take a decision” to revoke its granting of asylum.

Assange’s entire mission in forming WikiLeaks in 2006 was to enable people to use the immense power of the Internet to break through the “responsible” disinformation and censorship that prevails in the corporate-controlled and state-owned media. All critical and independent journalism, by its very nature, involves “speaking out about politics.”

Assange is now in grave danger. It is more than two years since a United Nations working group condemned the British government for enforcing Assange’s “arbitrary detention,” calling it a “contravention of his fundamental human rights.”

His lawyer Jennifer Robinson and supporter Pamela Anderson have publicly warned in recent weeks about the seriousness of his medical condition. For six years, he has been confined in a small building with no access to sunlight or adequate medical treatment. For 10 weeks he has been subjected to the additional psychological pressure of what Moreno declares will be ongoing, indefinite isolation.

A calculated operation is underway to break the WikiLeaks editor. Moreno’s statements only underscore that the aim is to force him to “voluntarily” leave the Ecuadorian embassy, to be taken by waiting British police and placed in detention on bail-related charges without any means of contacting the outside world. That would be followed by further months or years of imprisonment while his legal defenders fight American extradition warrants.

The government of Australia, where Assange was born and holds citizenship, bears immense responsibility for the situation. In late 2010, instead of defending an Australian citizen whose rights were under attack, the Labor Party government of Prime Minister Julia Gillard sided with Washington. It labelled WikiLeaks’ actions “illegal” and declared it would support the prosecution of Assange for espionage. The current Liberal-National coalition government has not lifted a finger to oppose his ongoing persecution.

The American state and its allies are seeking to destroy WikiLeaks and Julian Assange in order to intimidate every critical and independent media organisation. The aim is to suppress the exposure of the crimes and lies of governments and to silence all those who seek to defend democratic rights and freedom of speech.

The attack on Assange is bound up with the aggressive moves by US and global intelligence agencies, working with social media and Internet companies, to suppress left-wing, anti-war and socialist views online. A pall of censorship is descending over the Internet, the most democratic form of communication in human history.

The International Committee of the Fourth International (ICFI) and its publication, the World Socialist Web Site, are urging resistance. We call for the greatest possible international mobilisation in defence of WikiLeaks and Julian Assange. This is an essential part of a broader fight to defend Internet freedom, freedom of speech and all social and democratic rights of the working class.

A historical crossroads has been reached. Organisations and individuals will be judged by where they stand in this basic conflict over democratic rights.

The Socialist Equality Party, the Australian section of the ICFI, has called a demonstration in Sydney for 1:00 p.m. on Sunday, June 17 at the Sydney Town Hall Square. It is being held in conjunction with acclaimed journalist and filmmaker John Pilger, an unwavering defender of WikiLeaks, Julian Assange, media freedom and democratic rights.

The demonstration has also been endorsed by prominent civil liberties attorney Julian Burnside and by Terry Hicks, who waged a five-year struggle against the imprisonment of his son, David Hicks, in the hell-hole US prison camp at Guantanamo Bay.

Musician Roger Waters of Pink Floyd fame, who has for decades spoken out against war and injustice, has sent the WSWS a message of support endorsing action to defend WikiLeaks. On the stage of his concerts in Berlin over the weekend he posted the call: “Resist the Attempted Silencing of Julian Assange.”

The demonstration in Sydney will press the demand that the Australian government act immediately to secure Assange’s unconditional return to Australia, with a guarantee against any American attempt to extradite him to the US.

A vigil demanding freedom for Julian Assange will be taking place in London at the Ecuadorian embassy on Tuesday, June 19. The May government must end its persecution of Assange, drop the bail-related charges against him and allow him to leave the Ecuadorian embassy and the UK. Similar vigils on June 19 are being held in other cities around the world.

In contrast, a whole layer of trade union, Green Party and pseudo-left organisations that voiced support for WikiLeaks and Assange in 2010 and 2011 have repudiated any struggle against his persecution. They have shifted to supporting imperialism.

The working class and the youth, however, are entering into immense struggles, and there is enormous respect among them for Assange and WikiLeaks. The social force that will lead the fight to defend democratic rights is the international working class, as part of a broader struggle to secure its social rights and oppose war, inequality and the capitalist system.

We urge readers of the WSWS to turn to the workplaces, factories, campuses and high schools to fight for maximum support for the demonstrations and vigils demanding freedom for Julian Assange.