Above Photo: Protesters prepare to leave a construction site near the Mississippi River in Clearwater County on Tuesday. (Jillian Gandsey | Bemidji Pioneer)

CLEARWATER COUNTY — Roadwork that crosses the early stages of the Mississippi River was halted briefly on Tuesday morning by protesters who object to a plan to install an oil pipeline nearby and a similar plan in Louisiana, where the river drains into the Gulf of Mexico.

About 15 people set up a tipi and performed a water ceremony where the Mississippi meets County Road 40, pausing a mill and overlay project across the bridge there. The protesters were about 100 yards away from the spot where the county road intersects with the proposed route for Enbridge Energy Co.’s replacement Line 3 oil pipeline, which would pump 760,000 barrels of oil daily through northern Minnesota and has prompted fears of a spill or similar disaster.

“You can see the stakes right here,” said protester Tara Houska, pointing to a long row of dark flags that approached the road from the north, disappeared for a moment as they crossed it, then headed south, presumably marking the proposed route. “They’re upgrading roads that happen to be right near where the pipeline route is proposed, and that’s happening all across the state.”

Clearwater County staff said the work there is one of three mill and overlay projects scheduled for this construction season under a regularly updated five-year road maintenance plan. All three of the roads they’re milling and overlaying intersect with Enbridge’s preferred Line 3 route, but county staff said their work has nothing to do with the Canadian energy firm’s plan. 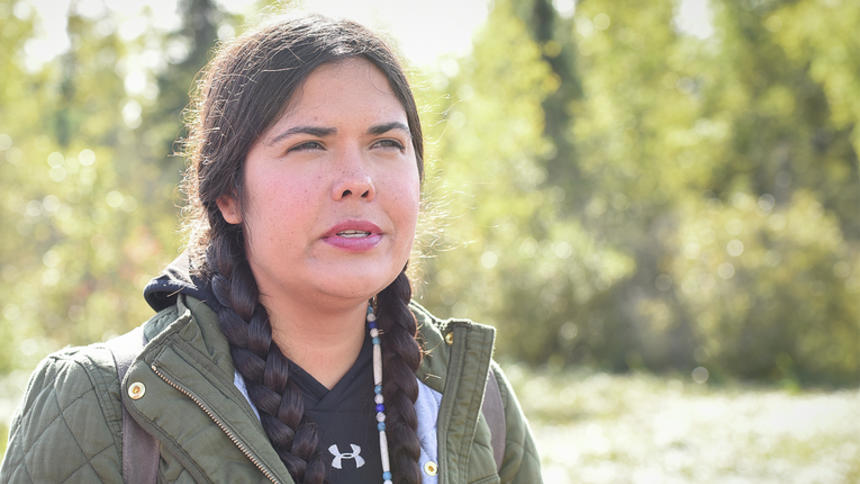 Tara Houska speaks about a protest near the Mississippi River on Tuesday in Clearwater County.

At the bridge over the Mississippi on Tuesday, protesters sang, prayed, and burned tobacco for nearly two hours. Their demonstration was designed to coincide with another in Louisiana, where the Mississippi ends and a similar project — the Bayou Bridge Pipeline — has also been met with resistance.“We’re in solidarity with them to show from the beginning to the end that we’re united in resistance and to let folks know, too, what’s going on,” Houska said. “I don’t think most Minnesotans are aware of just how far along they are and how close we are to this pipeline.”

Clearwater County sheriff’s deputies showed up a little while after the protest began, and agreed to let the protesters finish their ceremony. Sheriff Darin Halverson reported no arrests to the Pioneer, and a squad car quietly left the area as protesters did around 10:30 a.m.

“There is no Line 3 Replacement Project construction going on anywhere in Minnesota,” Enbridge Communications Specialist Juli Kellner told the Pioneer. “Enbridge continues to work through Minnesota’s robust regulatory process and moving forward with obtaining numerous environmental and other required federal, state, and local permits. Construction is not expected until 2019.”