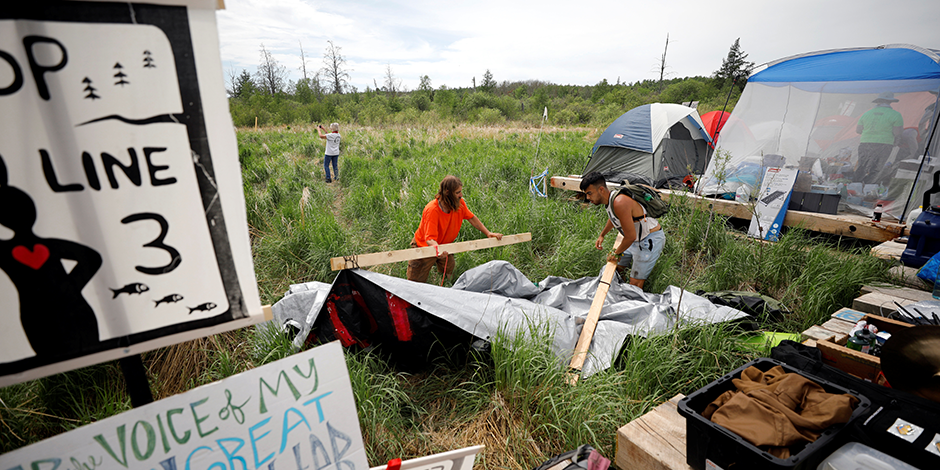 Line 3 Replacement Has Been Completed So Why Are Activists Still Camping Out?

Life in the resistance camps is difficult, but activists say important work remains.

Every few days, Jaike Spotted-Wolf walks over to a well near Camp Migizi to refill several five-gallon water containers. At the camp, where Spotted-Wolf is one of several matriarchs, there is no plumbing, no pipes and no faucets. Residents take turns getting water, which they need for basics such as cooking and showers.

The camp was — and is — one of several resistance camps formed to oppose Enbridge’s now-completed Line 3 project, which replaced a corroding oil pipeline built in the 1960s with a new, larger pipeline. The pipeline runs through northern Minnesota to Superior, Wisconsin. Nearly a month and a half after oil-laden tar sands began flowing through the pipes, activists are still living at Camp Migizi and other sites.

Temperatures are already below freezing up in Cloquet, where Camp Migizi is located. And on this particular trip to collect water, Spotted-Wolf is greeted by a rare supporter. “I hope you get running water!” the woman shouts, taking Spotted-Wolf by surprise.

That small sign of support meant a lot to Spotted-Wolf, who says the camp and its residents are treated as something of a nuisance by many of the residents of the surrounding area, which is on the Fond du Lac Band of Lake Superior Chippewa reservation. Fond du Lac’s tribal governing body, the Reservation Business Committee, filed an injunction in tribal court to shut down the camp two weeks prior, saying it is an illegal campsite. A judge has yet to rule on that request. Spotted-Wolf claims the campsite is legal because the grounds were bought by Taysha Martineau, the leader of the camp and a member of Fond Du Lac, in early 2021 through crowdsourcing funds.

“We get a lot of vitriol from the community. A lot of people hate us here as a camp and say that we’re troublemakers and that we are disrespectful to the tribes,” Spotted-Wolf said. Spotted-Wolf herself is not affiliated with any of the Ojibwe tribes, but is a member of three other tribes: Mandan, Hidatsu and Sahnish, tribes based in North Dakota.

Yet, despite the pressure from surrounding residents and the difficulty of living outdoors in northern Minnesota’s frigid winter, and the fact that the Line 3 pipeline replacement is complete and running, activists of Camp Migizi are determined to stay. Their purpose? To monitor the pipeline for leaks, and to be ready to respond to the next project that activists see as a threat to clean water.

The residents of Camp Migizi call themselves water protectors, a term coined within Indigenous communities to refer to activists who are dedicated to protecting waterways.

Already an aquifer near Clearbrook terminal was ruptured during construction, resulting in Enbridge receiving a $3.3 million fine from the Minnesota Department of Natural Resources (DNR). In August, the Minnesota Pollution Control Agency (MPCA) announced that it is investigating other potential damage that occurred during construction, including 28 drilling fluid spills. The DNR is also investigating whether two other aquifers have been punctured. Enbridge has denied any additional aquifers have been breached and says it is working with the DNR on remediating the Clearbrook breach.

“We’re monitoring that stuff and making sure that’s being documented so that when there is a lawsuit against Enbridge, we can say, here’s our documentation and here’s our proof of how, for one, how we were right and you guys are wrong, but also how much damage has been caused and how much that will impact communities,” said Spotted-Wolf.

Frank Bibeau, tribal attorney for the White Earth Band of Ojibwe, and other Indigenous activists have raised money to for drone equipment and to commission a drone flyover with thermal equipment imaging to capture images of drilling fluid spills and other groundwater contaminants that they believe have gone undetected by MPCA and the DNR. The flyover will be done by a Canadian company, costing approximately $52,000, and requires a government entity, in this case the tribal governing body of White Earth Band, to commission the flight.

Bibeau said imaging from the drones will be used for the band’s “rights of nature” claim, or specifically, “rights of wild rice,” in tribal court, to determine whether the state violated the tribes’ protections of wild rice by issuing Enbridge a water permit for construction. Although the pipeline does not cross into White Earth Band territory, the band argues the water permit issued by DNR contributed to this year’s low water levels and put nearby wild rice beds at risk, thus violating tribal law. Other Ojibwe bands have signed onto an amicus brief in support of White Earth’s suit. Though the suit cannot shut down the pipeline, Bibeau says that it will establish an important precedent for future natural-resources cases.

In September, an appellate court denied the Minnesota DNR’s request to dismiss the case. Oral arguments are set to begin in St. Paul on Dec. 16.

In addition to paying for the cost of the drone flyover of the pipeline, a portion of funds raised by activists will be going to Ron Turney, a water protector and member of the White Earth Band, who has regularly photographed the effects of the pipeline over the past year on the region’s water bodies.

“The state of the river up here is the worst it’s been all year,” Turney said. “The water level is high, so all the chemicals that were draining off are now rising up on the easement and starting to come down the river at a much faster rate. The turbidity levels are so high that you can’t see any more fish in the river downstream.”

Turney said he has been collecting samples of the water for testing and believes the next steps for the movement are to “hold Enbridge accountable for the damage they’ve done and the permit violations they’ve committed.”

Organizing The Next Fights

Back at Camp Migizi, Spotted-Wolf says the camp has also become a center to organize for other fights against resource extraction, including the proposed Tamarack mining project, a proposed set of mines that would extract nickel, cobalt and copper from sulfide ore bodies in northeastern Minnesota.

“We’re close enough that we could deploy right now and be there or to Wisconsin to help them with that fight if needed to,” Spotted-Wolf said referring to Line 5, another replacement project overseen by Enbridge for a pipeline that runs from Superior, Wisconsin to upper Michigan and has stirred up opposition from several tribes and environmental activists.

“There’s still other causes in Minnesota, near Minnesota and then outside of Minnesota that we’ll be able to continue to pursue in terms of leaving our camp space and going to,” said Spotted-Wolf.