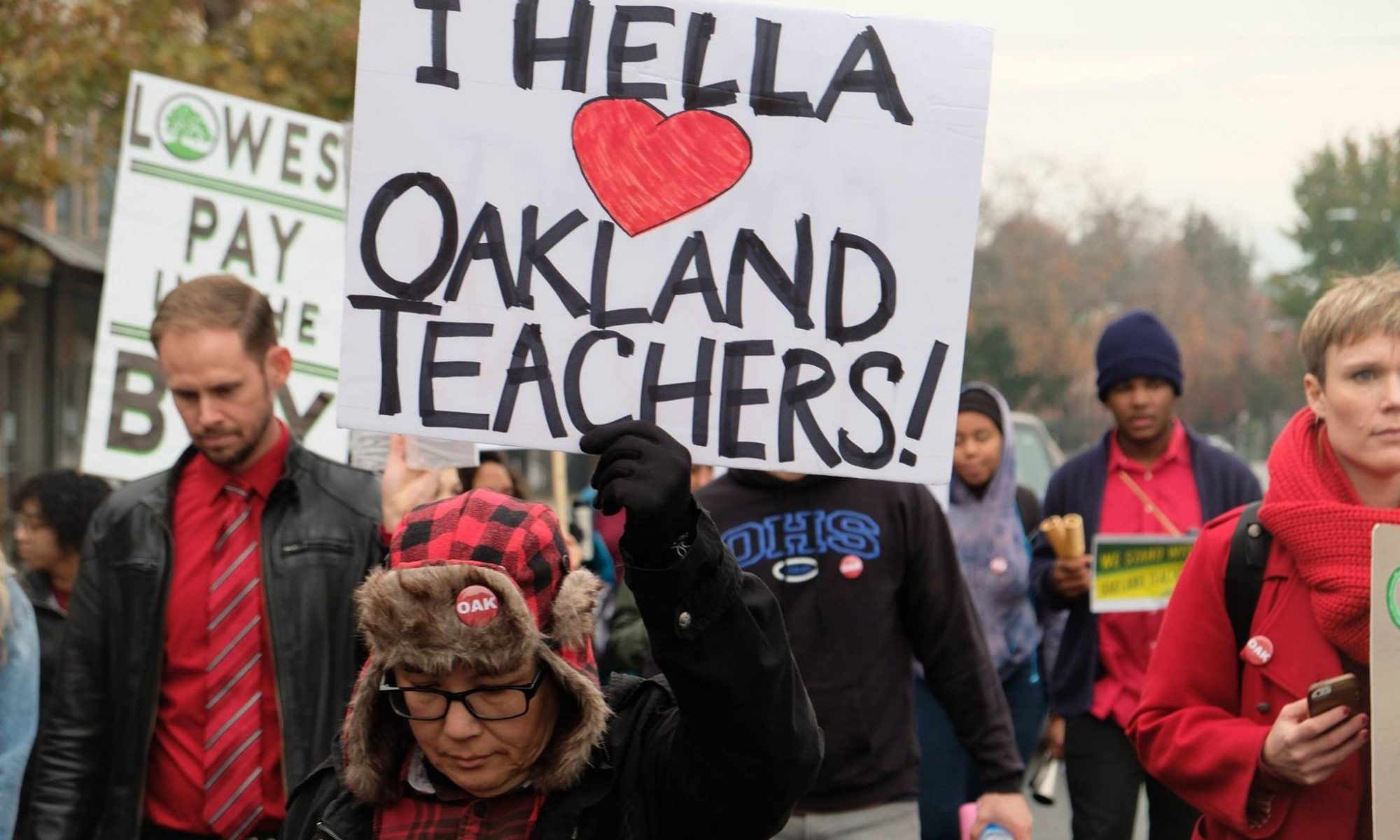 Linking Popular Movements And Unions Is A Winning Strategy For Workers

After years of declining power and stagnant wages, workers in the United States are awakening, striking and demanding more rights.  A Bureau of Labor Statistics report shows the number of striking workers is the highest since 1986. In 2018, 485,000 people went on strike, a number not exceeded since the 533,000 people in 1986, and 2019 will be even larger. Workers should be in revolt, as the Economic Policy Institute found workers have had stagnant wages for three and a half decades even though productivity is increasing.

This week we look at the origin of Labor Day, how workers are returning to those roots and the future for workers in the United States.

This is the 125th anniversary of Labor Day, which was declared in 1894 after the nationwide Pullman railroad strike led by the American Railway Union under Eugene Debs when 260,000 workers in 27 states participated. Federal troops were used to stop the strike and 26 people were killed. Six days after the more than two-month-long strike ended, President Grover Cleveland pushed legislation through Congress creating Labor Day as a conciliatory gesture to the workers.

Near the end of the strike, on July 4, Debs described the strike as the beginning of a conflict where “90 percent of the people of the United States will be arrayed against the other 10 percent.” Six days later, Debs was arrested and, after his conviction was upheld by the Supreme Court, he served six months in prison for violating an injunction against the strike. When released, Debs started the Socialist Party, which built worker power in elections, resulting in many changes to the laws.

The Pullman Strike was part of a growing labor movement that won reforms such as ending child labor, the 8-hour workday, the right to unionize and Depression-era New Deal laws, which included many laws demanded by workers, the Socialist Party and the Progressive Party.

Since the 1947 Taft-Harley Act, which restricted worker rights, unions have been in decline with reduced members and rights. The Janus decision, which some saw as a fatal attack on public-sector unions, might be the low point, perhaps the darkness before the dawn, for workers in the United States. Workers are realizing that democracy requires unions and now 64% of people say they approve of unions, a dramatic increase of 16 percent over a record-low figure registered in 2009.

Janus seems to have focused unions on the need to rethink their approach, and so far unions who have moved to an organizing culture have not been hurt by Janus. In recent years, there has been an awakening with a wave of strikes such as the teachers’ strikes in multiple states (California, Colorado, Michigan, New Jersey, Oregon, Pennsylvania, Tennessee, Washington, West Virginia, among others). There have also been recent strikes by healthcare and hotel workers in ten cities, grad students, farmworkers and Stop and Shop, National Grid and Steelworkers, as well as the largest strike of manufacturing workers in the Trump era, McDonald’s, and even prisoners on stike in 17 states. WalMart workers threatened to strike and won increased wages.

Workers in the new gig economy also face challenges. When Uber and Lyft went public, it was bad news for drivers. While investors made billions of dollars, it created new “demands from investors for fare increases and further attacks on drivers, already grossly undercompensated.”  These drivers are contractors, not employees subject to minimum wage laws or the benefits of being an employee. The effective hourly wage of an Uber driver is less than what 90 percent of US workers earn. Drivers have begun to organize and strike to demand better wages and benefits.

It is time for a new era of worker rights, union organizing, higher wages, and worker ownership. Decades of mistreatment of workers are boomeranging and could make the next decade one of massive advancement by workers.

The vast majority of people in the United States are wage slaves as they depend on their job for survival and missing a short time without work puts people in serious financial difficulty. This is the time to transform the relationship of workers to their jobs.

The Congressional Budget Office found the wealth divide has reached new levels of disparity, finding the wealthiest top 10 percent of families with incomes of at least $942,000 now hold 76 percent of the total wealth and average $4 million in wealth. The remainder of the top half of the population took most of the rest, 23 percent, which left only 1 percent of wealth for the bottom 50 percent. That bottom half can barely pay their bills, has no money for emergencies, has no savings, can’t afford to send their children to college and is trapped with great insecurity and no upward mobility. In fact, the bottom 25 percent of people in the US are, on average, in debt $13,000 and the bottom 12 percent is $32,000 in debt.

One reason for the wealth divide is that since 1979 productivity has increased by 70 percent while hourly compensation has increased only by 12 percent. During this period, the top one percent’s wages grew 138 percent, while wages of the bottom 90 percent grew just 15 percent. If the wages of the bottom 90 percent had grown in parallel with the increase in productivity, then the bottom 90 percent’s wages would have grown by 32 percent, more than double the actual growth. Breaking this down further, middle-class wages have been stagnant with an hourly wage increase of only 6 percent since 1979, while low-wage workers’ wages have actually declined by 5 percent. Those with very high wages had a 41 percent increase.

Radical transformation is needed to correct decades of decline in worker’s rights and wages. This means reversing the era of privatization and creating economic democracy, such as worker ownership and workers sharing in the profits. As the calls to declare a climate emergency get louder, there is an opportunity to do both while we confront the reality of the climate crisis. Various proposals are being put forward for a Green New Deal. Transitioning to a clean energy economy requires changes in many economic sectors, e.g. construction, manufacturing, transit, agriculture, housing, finance, energy, and infrastructure. Jeremy Brecher and Joe Uehlein list twelve reasons why a Green New Deal could be good for workers.

Responding to the climate crisis is going to require major public capital investments over the next two decades. With these public investments, the United States needs a democratically controlled economy. This means more public works, and the nationalizing of some sectors of the economy, especially the energy and transportation sectors.  It is an opportunity to put in place public ownership where workers have a share in ownership of businesses or complete ownership based on a worker-cooperative model.

Labor unions need to be involved in determining the details of the new Green-era economy. As Labor for Sustainability points out, many unions are already on board. It is important for workers involved in the fossil fuel economy to realize the new economy of the future will not include fossil fuels and they need to help create that new economy so they can be part of it and benefit from it. Green New Deal advocates are calling for a “Just Transition”, where workers are compensated and receive training as they transition to the new economy. One of the challenges of building the new economy is it will require millions of workers. There will be a worker shortage as all sectors of the economy will have to transition to sustainability and clean energy.

Join the People’s Mobilization to Stop the US War Machine and Save the Planet, September 20 to 23 in New York City. We will join the climate strike with messages that war = ecocide. We’ll march for Puerto Rico’s independence. We’ll talk about racism, militarism, and resistance. We’ll rally and march to demand the US be held accountable for its global gangsterism with Cornel West, Roger Waters, and the Embassy Protectors. And we’ll hold an evening of solidarity with representatives from countries impacted by US sanctions and intervention and music by David Rovics (you must register for this at bit.ly/RSVPapathtopeace). Learn more at PeoplesMobe.org. And sign the Global Appeal for Peace.

The shift to a democratized economy is already underway as more people are developing worker-owned businesses. The movement for worker ownership in the United States has been growing rapidly since before the 2008 financial crash. This movement is now reflecting itself in the electoral process. Polls show widespread support among people in the US for workers having ownership in corporations where they are employed.

Last week, Senator Sanders put forward a labor program that included giving workers a greater ownership stake in companies. Senator Warren made a similar proposal last year when she announced her exploratory campaign that included workers on boards of directors and receiving a share of the profits. Green candidate Howie Hawkins has a long history of support for economic democracy, giving workers more rights, a share in profits and ownership of corporations. Such “codetermination” policies are widely prevalent in Europe providing unions with a strong voice in corporate decision-making.

Wage-Slaves Must Revolt To Reverse The Era of Privatization

The attack on workers is a product of the privatization era that began under Reagan, accelerated under Clinton and continues today. Some of the teacher’s strikes have focused on charter schools, highlighting how privatization hurts workers. Privatization strengthens the financiers. The negative consequences of the privatization era are increasing support for socialism and economic democracy as well as specific policies such as national improved Medicare for all, municipal Internet networks, public utilities, and worked-controlled businesses.

When we describe building power at Popular Resistance, we are describing the kind of people’s movement that is able to stop business as usual with a mass general walkout or other tactics. A wage-slave revolt is where the popular movement is going in the foreseeable future.

The escalation in worker organizing in the US, both inside and outside of unions, over the past half-dozen years is coming at a time when people are being radicalized in social movements from Occupy to Black Lives Matter. Unions are connecting worker struggles to community concerns and as a result, when they strike, the community supports them.  The linking of the popular movement to growth in unions strengthens both workers and activists. People uniting across issues is building a popular movement that is demanding people and planet, not profit.

Labor Day is a time to reflect on the potential of workers building power. The people are on the path to build a powerful political movement against both corporate-controlled parties to fight for a government that represents the interests of workers and puts people and planet before profits.