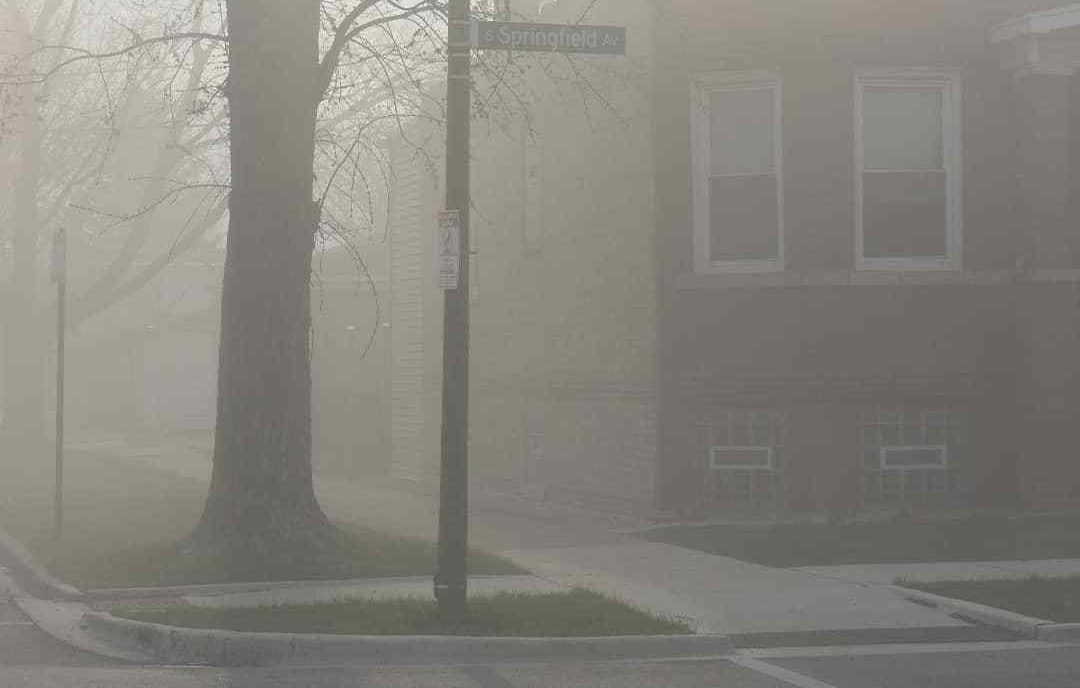 Above photo: Little Village streets were covered in dust following demolition of a smokestack at the site early Saturday morning. Maclovio/Instagram @Macnifying_Glass.

Why did the city let a planned explosion happen?

Activists begged the city not to allow a smokestack demolition during the coronavirus crisis at the old Crawford Coal Plant, but the explosion ended up coating the mostly Latino neighborhood in dust.

Chicago, IL – City officials on Sunday sought to lay the blame for the massive dust cloud that descended on Little Village on a “dishonest” developer that demolished an old coal plant smokestack the day before.

But the city had an active role in the demolition, Mayor Lori Lightfoot acknowledged, by approving permits and overseeing the work Saturday.

In the midst of managing the city’s battle against the deadly coronavirus “literally robbing people of their ability to breathe,” Lightfoot had to scramble to contain the damage from Saturday’s emergency.

Activists had begged the city not to allow the demolition, but it instead proceeded with representatives from the city’s Department of Health, Buildings and Fire Department on hand to watch.

At a Sunday morning press conference on the site of the old Crawford Coal plant, a furious mayor lashed out at Hilco Development Partners for allowing the dust cloud, and acknowledged the city doesn’t yet know the extent of what exactly landed on Little Village.

Lightfoot said Hilco had given the city repeated assurances that its contractor would not let any debris escape the site. Instead, “a massive plume of dust drifted across this area, dropping dirt and particulate matter across homes, cars, businesses, trees and every other inch of this community,” the mayor said.

Lightfoot said the developer promised to use high-powered water canons to spray down the smokestack before, during and after it was toppled, but she said they failed to do so based on video she watched. Even if there were canons used, “whatever they had on site was woefully insufficient,” she said.

“I’m here to say to the city, this community and to Hilco … this is absolutely and utterly unacceptable,” the mayor said. “It’s unsafe, it’s unsanitary. I would not tolerate this in my neighborhood, and we’re not going to tolerate it here, either.”

Lightfoot shut down work at the site after dozens of photos and videos of the dust clouds emerged Saturday. But activist Kim Wasserman, who called on Lightfoot to stop the implosion from taking place, said it’s too late now.

“The smokestack is down and [dust] is in the air,” said Wasserman, who runs the Little Village Environmental Organization. “Asbestos, lead, particulate matter — that’s in the air now. … People are petrified.”

Photographer Maclovio, who captured the aftermath, said he struggled to breathe when the dust plume descended.

“I was caught in it. I wasn’t prepared for it so I made a makeshift mask. … My lungs started hurting, I’m not going to lie,” he said.

“We are working cooperatively with the City of Chicago to review yesterday’s demolition event undertaken by our contractor,” Perez said. “We are sensitive to the concerns of the community and we will continue to work in full cooperation.”

Just after the implosion, before photos and videos were widely shared, Lightfoot said the city’s Department of Public Health was “actively engaged with the owners of the property.” City agencies made sure there were precautions in place so there wasn’t more dust than a normal demolition, Lightfoot said.

Wasserman wants to know if this is what a normal demolition looks like.

Watching thick dust clouds waft through their streets, neighbors who live near the old Crawford Coal Plant were alarmed. Their alarm was magnified when they considered the timing — the demolition happened with little notice and in the middle of a respiratory pandemic on Easter weekend.

The resulting cloud blanketed Little Village, a South Side neighborhood home to a majority Latino population and a port of entry to Mexican immigrants.

Wasserman, who works to track environmental injustices on the South Side, said she found out the developer planned to blow up the smokestack at 11 p.m. Thursday. It was scheduled for 8 a.m. Saturday; she immediately called on Lightfoot to halt the demolition.

The city’s Department of Public Health and Department of Buildings had quietly issued permits for the demolition to Hilco Redovelopment Partners, the developer that owns the old coal plant. The site being redeveloped into a 1-million-square-foot distribution center.

There was no public meeting to warn neighbors. When Ald. Michael Rodriguez (22nd) learned about the planned implosion, he asked Hilco to notify neighbors via letters in English and Spanish. Those notices were mailed earlier this week, Hilco spokeswoman Julia Sznewajs said.

Rodriguez did not send his own notice to neighbors.

A canvass team dropped flyers at homes near the site on Friday — hours before the demolition and posted an implosion notice on a project website on Thursday, the developer’s team said.

“We get more notification with street cleaning, honestly,” Camargo said. “Would this be happening in Lincoln Park or Lincoln Square? …I doubt it.”

Many neighbors didn’t know the smokestack would be blown up. Wasserman and others hurried to tell as many people as they could.

Meanwhile, the developer and city officials assured neighbors the demolition would be safe.

Sznewajs, speaking for the developer, said abatement testing showed no presence of asbestos or lead in the smokestack. But she refused to provide evidence backing up such claims, deferring questions to the city.

The Chicago Department of Public Health was monitoring the site weekly to ensure abatement work was being done safely at the site, Susan Hofer, a spokeswoman for the city, said Friday.

Hofer said the developer was required to provide proof the remediation was completed and appropriate steps were taken to maintain air quality standards. Block Club has asked the city to make those reports public.

“The Chicago Department of Public Health has completed multiple inspections to evaluate the conditions, and the city does not expect any air quality concerns other than the normal dust that will be controlled with various water equipment,” including a Fire Department truck, Hofer said.

Despite the assurances, the demolition sent the dust, dirt and particulate matter across the neighborhood.

‘They are going to be held accountable to clean things up’

Now, after the dust has already covered homes, Rodriguez, Lightfoot and others are taking action.

Lightfoot issued a stop work order at the site and the city is investigating the incident. City officials will conduct air-quality checks, soil testing and distribute masks to nearby residents Sunday.

Lightfoot also ordered Hilco to do an immediate cleanup of the neighborhood, including cars and homes.

The city cited Hilco and will bar work at the site until a full accounting of what happened is delivered. The study will look at what dust mitigation efforts were used, the impact of wind gusts on the cloud and more, the mayor said.

In response, all demolition across the city will be halted for a week, Lightfoot said, so the city has more time to review demolition plans.

Ald. Rodriguez, the freshman alderman who represents the area, said he won’t let work resume at the Crawford site as long as the city is under a stay at home order because of coronavirus.

Asked why he didn’t push to postpone the demolition, Rodriguez said “there was conversation” about delaying the demolition, but with city permits issued, he claimed he “didn’t have a say in that matter.”

“They are going to be held accountable to clean things up and make sure it doesn’t happen again,” Rodriguez said.

But this isn’t the first time the developer has had issues, Rodriguez acknowledged. This is the second time work has been stopped — the first time was because a worker died at the site.

And last summer, the company was fined a nominal $10,000 after dust was seen blowing off the construction site.

On Sunday, Rodriguez said Hilco was “disingenuous” about its effort to keep the dust at bay, and “dishonest” about giving residents adequate warning.

But Rodriguez also took some blame, saying he should have warned neighbors faster himself.

“At this point, I wish I would have alerted residents but I didn’t, and for that I’m very sorry,” he said.

‘People don’t care about us’

The Little Village Environmental Justice Organization is now being “inundated with calls” from panicked neighbors.

The group has requested reports on asbestos and lead testing on the site, but has not received any reports to date, Wasserman said.

After the explosion, Alexandra Pérez, who lives just blocks from the old coal plant, said the explosion and resulting dust clouds brought her back to the days when the plant was still functioning. Fine particle dust would make its way inside her home. Now dust is coming into her home again.

Her cousin, Maria Luisa Pérez, also lives north of the old plant and is worried about how the dust could affect her pregnant daughter, who has asthma.

“What am I supposed to keep an eye out on?” Alexandra Pérez asked. “I’m concerned about asbestos and lead…Are we going to get tested?”

This isn’t the first time the Little Village Environmental Justice Organization has fought to change the course of this site. In 2012, the century-old Crawford Power Plant was shut down after activists raised concerns about the impact coal pollution was having on the health of Little Village residents.

Wasserman points out this emergency happened on a site many neighbors don’t want to see be developed for this use. For months, neighbors fought to stop Hilco’s redevelopment plan, fearing the distribution center would bring more diesel trucks and increase pollution to Little Village.

But environmental groups continued their fight, asking for air quality monitoring during demolition. In August 2019, a city official with the city’s Department of Public Health explained the developer won’t be required to test the air quality and said “kids and people with breathing problems” and people who “are sensitive to dust” should “limit outdoor activity” as work is completed.

The implosion is “another example” of how Little Village and other Southwest Side communities are “sacrificed” for industry, Wasserman said. Peoples’ lives are being put at risk over the construction of a warehouse in the middle of the coronavirus pandemic, she said.

“The alderman saying [the developer] did everything by the book, the fire department saying there were no problems. It sends a message that people don’t care about us,” Wasserman said.

For the immigrant neighborhood, “it’s hard enough when the federal government doesn’t care about you,” Wasserman said.

“But then your local government doesn’t care about you enough to postpone work at the site,” Wasserman said. “It gets to a point when you wonder: Where’s the humanity?”

In response to photos circulating online, Hilco Redevelopment Partners said the demolition was “completed in close coordination with and full approvals by City and State authorities and included significant onsite safety and dust suppression measures provided by demolition experts and the Chicago Fire Department.”

The fallout from the incident continued Sunday evening as a band of aldermen called for the city’s inspector general to investigate how the demolition permit was approved, the city’s oversight of the demolition and the communication with the neighborhood. Alds Daniel LaSpata (1st), Byron Sigcho-Lopez (25th), Rossana Rodriguez-Sanchez (33rd) and Carlos Ramirez-Rosa (35th Ward) called for the probe.