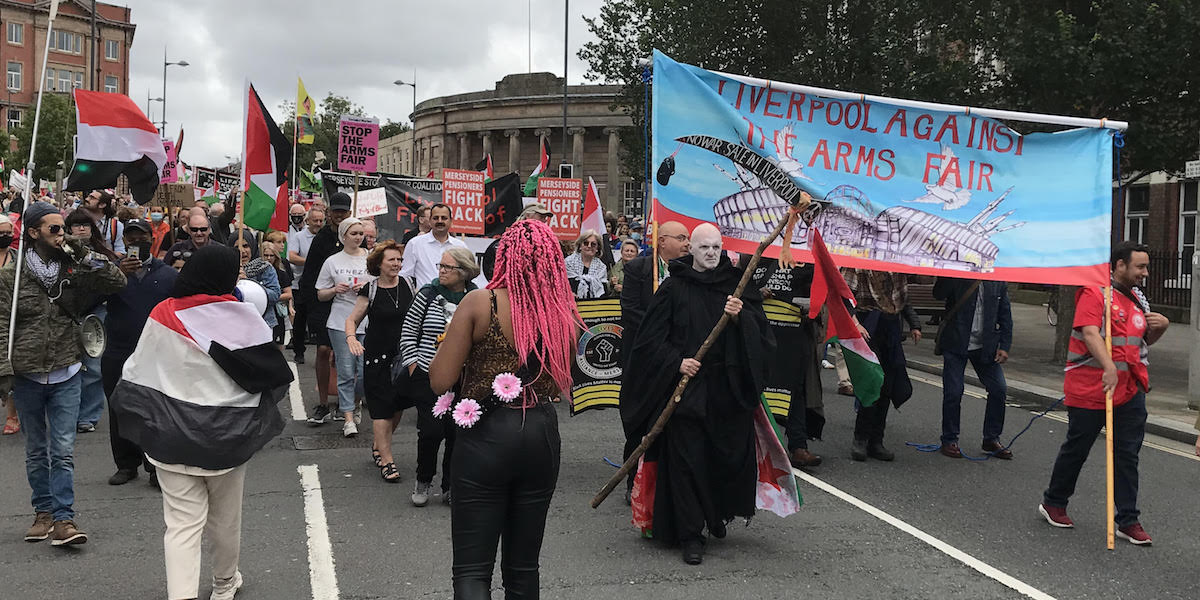 Above Photo: Liverpool Against the Arms Fair.

After Two Decades Of War In Afghanistan, There Is No Option But To Protest A Conference For Companies Complicit In Human Rights Violations.

A national protest against an upcoming arms fair took place in Liverpool on 11 September with over 3,000 people in attendance. Jeremy Corbyn and Maxine Peake were among those who showed support. In his speech to the gathered crowd of protestors Corbyn urged, ‘let’s turn the page and learn the lessons from the past. Let humanity prevail.’

AOC Europe, the Association of Old Crows’ electronic warfare conference, is set to be hosted by the city’s ACC Exhibition Centre between 11 and 13 October. For an event of this nature to occur in the wake of US withdrawal from Afghanistan, feels particularly offensive. The ongoing effects of human rights violations perpetrated by Western intervention in the Middle-East are playing out in Afghanistan as I write these words. It is no secret that arms companies have directly profited from this conflict. At least seven of such companies are on the list to attend the fair, including Textron, MBDA, L3 Harris and Teledyne.

Prior to the protest on Saturday Liverpool Mayor Joanne Anderson claimed that she is ‘powerless’ to stop the fair from taking place. Declaring that she is ‘appalled’, Anderson nevertheless stated that the fair is ‘lawful’ and the council is not able to interfere with bookings taken by ACC. The venue is actually owned by the council, but the mayor claims that it has no say in its management since launching the ACC Liverpool Group Ltd to run the venue on their behalf. Public Interest Law Centre (PILC) disputed this, accusing Anderson of evading responsibility in an ‘unlawful delegation of powers’. Local campaigners aim to hold the council accountable for their influence as sole shareholder in ACC Liverpool. They want them to stop the fair and institute an ethical policy for all bookings.

The chair of ACC Max Steinberg stated that the event will ‘allow the development of sophisticated systems used to make the world a safer place’. Such a claim is a delusional simplification. Arms trade is never exclusively about safety. It is primarily about profit and profit can be made and has been made by supporting repressive regimes and countries with a track record of human rights abuses. This spreads violence, instability and fear – the very antithesis of safety – across a significant portion of the world.

Steinberg also reiterated the AOC’s claim that all the traders have been thoroughly vetted and are under scrutiny. However, one only has to look at the history of a few of the companies on the fair’s list of traders to discover a myriad of infringements of humanitarian laws.

Elbit provides up to 85 per cent of land-based equipment procured by the Israeli military, as well as 85 per cent of its drones, which have been used to aid Israel’s brutal occupation of Palestine.

Raytheon is known to supply military arms to Saudi Arabia, including their Paveway IV bombs which have been used by the coalition to destroy civilian economic structures in Yemen. These structures include farms, factories, warehouses and power stations. Before their destruction these structures were used to produce and distribute food, medicines and electricity to the local community. The UK government confirmed that some of these bombs were manufactured in response to Saudi requests for additional UK support.

Textron was the last company to stop producing cluster bombs. These bombs were prohibited by the Convention on Cluster Munitions because of the tendency of the bomblets they release to not all explode on impact. This means they remain on the ground and pose a long-term risk to civilians. Although the Convention’s treaty was drafted in 2008, Textron continued to make these cluster bombs until 2016.

Leonardo has experience in the hostile border control sector, meaning that they profit from the refugee crisis. They provide helicopters for Italy’s anti-migration operations in the Mediterranean and for Libya’s notorious border patrol. An often overlooked source of global arms trade profits, the ‘border security’ market is worth around £13.5bn per year.

Liverpool should not support such a reprehensible event at any time, but particularly not in the current political climate when the crisis in Yemen, the occupation of Palestine and the conflict in Afghanistan remain unresolved. Liverpool is the city of Lennon’s Imagine, the Capital of Culture 2008. Its modern spirit of liberal vibrancy needs to be combined with an acknowledgment of its past role in slavery to create a hyper-vigilance against any present injustices. The rest of the nation has joined the people of Liverpool to speak out against this fair. Now we need to maintain the pressure on both the ACC and the City Council until they choose the ethical path and stop the arms fair.