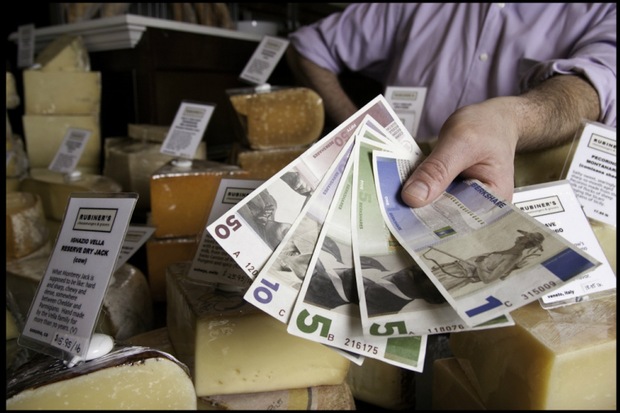 GREAT BARRINGTON, Mass. — Whenever Alice Maggio opens her wallet, she never hesitates about how to pay. It’s always cash, and it’s rarely dollars.

“They’re beautiful,” she coos as she shows off the colored bills, which are unlike any other. “You can take pride in spending them.”

Maggio frowns on dollars, preferring something else, called a BerkShares. The currency is available only in the Berkshires region of western Massachusetts. The area, which long ago embraced the organic and shop-local movements, decided in 2006 to take it a step further by creating its own currency. Town leaders hoped it would encourage people to shop only in stores in Berkshire County.

“When you have BerkShares in your pocket,” Maggio said, “you might not go to McDonald’s. You might choose to go to a locally owned restaurant.”

People can now walk into five banks across the county and change dollars into BerkShares. More than 400 businesses accept the alternative currency. Now 140,000 bills are in circulation, in denominations of 1, 5, 10, 20 and 50 that bear images of local heroes and landscapes.

The idea born in the rolling Berkshire hills is getting international attention: A Dutch nonprofit, the Doen Foundation, this week extended a half-million-dollar grant to expand the program so it can start offering loans.

“Partly as a result of the financial crisis, people no longer believe in banks, and banks are no longer willing to support many of the small, medium-size enterprises,” Doen’s director, Nina Tellegen, said from its headquarters in Amsterdam. “So by introducing this loan system within the BerkShares currency, that’s a very important next step.”

Her group focuses on local currencies around the world as a way to perhaps hedge against events like the euro crisis. The BerkShares program, she said, is one of the largest and most successful her group has worked with. It’s among the front-runners of local currencies, she said.

“They’ve been very successful in involving many people in the community,” Tellegen said. “With the BerkShare initiative … we hope to build a more sustainable and more social world.”

Maggio, 25, has been leading the effort to persuade townspeople and businesses to ditch the dollar.

“I think we’re really on our way to being embraced,” she said. “It’s not like all hippie-dippie businesses taking BerkShares. There are excavators and dentists and lawyers and accountants.”

Phyllis Webb prefers that her customers use BerkShares when they buy ukuleles at her shop. Her company builds and ships thousands of the instruments across the world.

“I go to the store, and I actually enjoy pulling out my money — my BerkShares — a little bit earlier, while I’m waiting in line,” she said. “I’m showing people I’m making more of a commitment. I’m going the extra mile in saying not only do I support local, but I want the money to stay here in the Berkshires.”

That also poses a problem, since BerkShares don’t travel. Webb is limited in what she can spend them on. For instance, she can’t use BerkShares to buy some parts she needs to make her ukuleles.

“There is a certain threshold as a business where if I can’t spend them reasonably, I have to sort of find that balance, but we’re not there yet,” she said. “Hopefully, we can grow BerkShares so we can circulate them.”

To encourage people to adopt the currency, a 5 percent discount is built into the exchange. So $19 buys 20 BerkShares. At stores, BerkShares have the same value as dollars. But if you return to the bank to convert BerkShares into dollars, you lose the 5 percent discount. Businesses are the ones largely absorbing that blow. (When BerkShares launched, the exchange rate had a 10 percent cut, but the community softened it two years later.)

“I can’t pay the electric company with BerkShares,” said Matthew Rubiner, who owns a grocery and coffee shop. “I can’t pay most of my vendors with BerkShares. Right now, it’s undeniable the merchants kind of take that 5 percent hit, but we’re not unhappy to do it.”

He doesn’t mind losing money on BerkShares since he says the program has brought publicity — and customers — to his store.

“It does undeniably add to business,” Rubiner said. “It does let everybody know we’re trying to add value to this community.”