Local Locks Himself To Excavator At Pipeline Work Site

Michael stated: “I grew up in this county, this is my home. When I was young, I played in the forests on Brush Mountain, when I got older I hiked the trails of Peters Mountain. For the past 4 years, I have fought against the Mountain Valley Pipeline. We have watched as this pipeline has wreaked havoc — from Brush Mountain to Peters Mountain, from Four Corners Farm to Bottom Creek — not just havoc on the land, but on the lives and mental wellbeing of individuals, and the sanctity of place and safety.

“These actions are not just about this stretch of pipe, this stand of trees. These actions are a defiance. Defiance of a world in which men with guns protect men with chainsaws in the name of destroying memories, homes, and lives. Defiance of the idea that progress is measured by the thickness of the wallets of a heartless few, at the expense of land they never learned, explored, loved, or even set foot upon. Defiance of our erasure, of a thousand stories cut short by an excavator that does not understand life with balance, only destruction and domination. Defiance of a multibillion dollar disaster backed by a state born from genocide and violence. Defiance of a project that has become a studied master of systematic decimation of land, species, and all deemed its economic opposition.”

In support of today’s action, Christian Shushock, 17 year old activist in Blacksburg, stated: “As a teenager who has grown up in Appalachia, I have fallen in love with these mountains. I understand the intimate connection that we as Appalachians have with nature, and the sacred duty we have to protect it. If projects like the Mountain Valley Pipeline are allowed to degrade our environment, not only is nature threatened, but also the very future of Appalachian youth such as myself.”

The Mountain Valley Pipeline is a 303-mile, 42-inch diameter fracked gas pipeline that runs from northern West Virginia to southern Virginia. Earlier this month, a 70-mile extension into North Carolina (which was proposed in 2018) was denied its Section 401 Water Quality Certification by the NC Department of Environmental Quality. The Mountain Valley Pipeline endangers water, ecosystems, and communities along its route, contributes to climate change, increases demand for natural gas (and therefore fracking), and is entrenched in corrupt political processes.

Today’s action site is located just a few miles from the ongoing tree sit blockade at Yellow Finch. There, pipeline fighters have been living in some of the last remaining uncut trees on the pipeline easement since September 5, 2018!

The project is in a state of uncertainty. MVP currently lacks permission to cross many water bodies and has been forced to explore alternate approaches in crossing through the Jefferson National Forest. The coming months will show whether construction is able to move forward in those areas, and whether investors continue to believe in the pipeline’s ever-distant goal of completion. 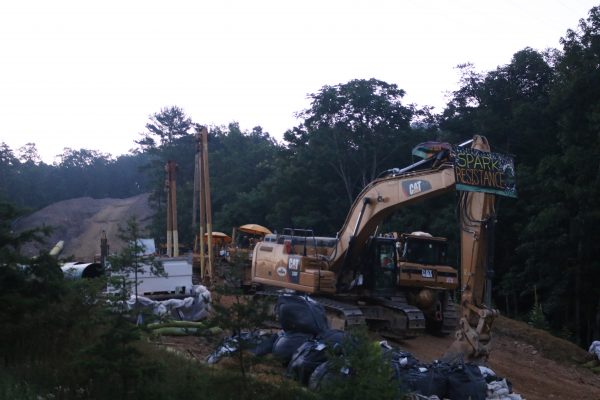