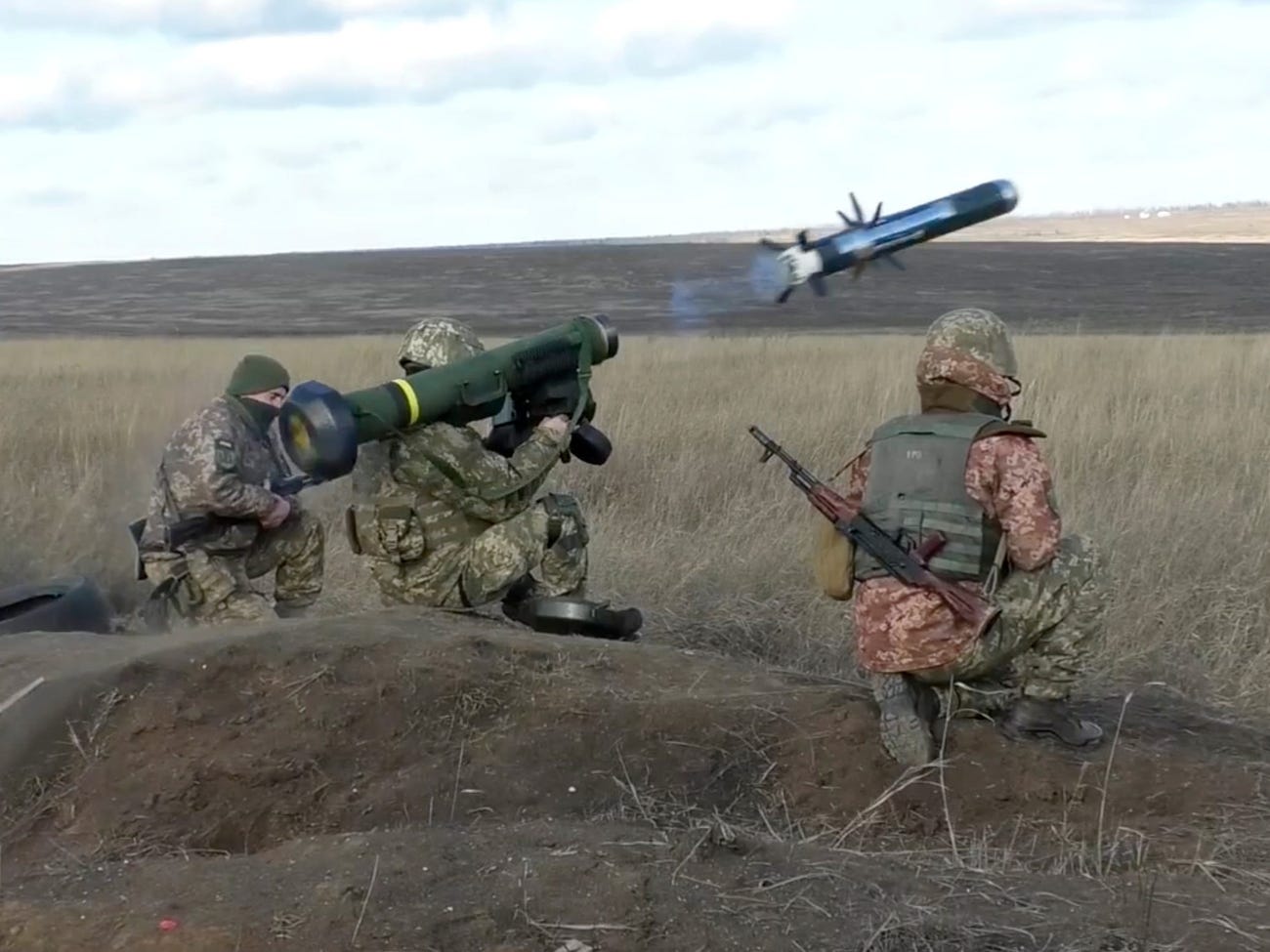 – From Bob Dylan’s iconic song, “Masters of War,” released in 1963. It is all the more relevant today. 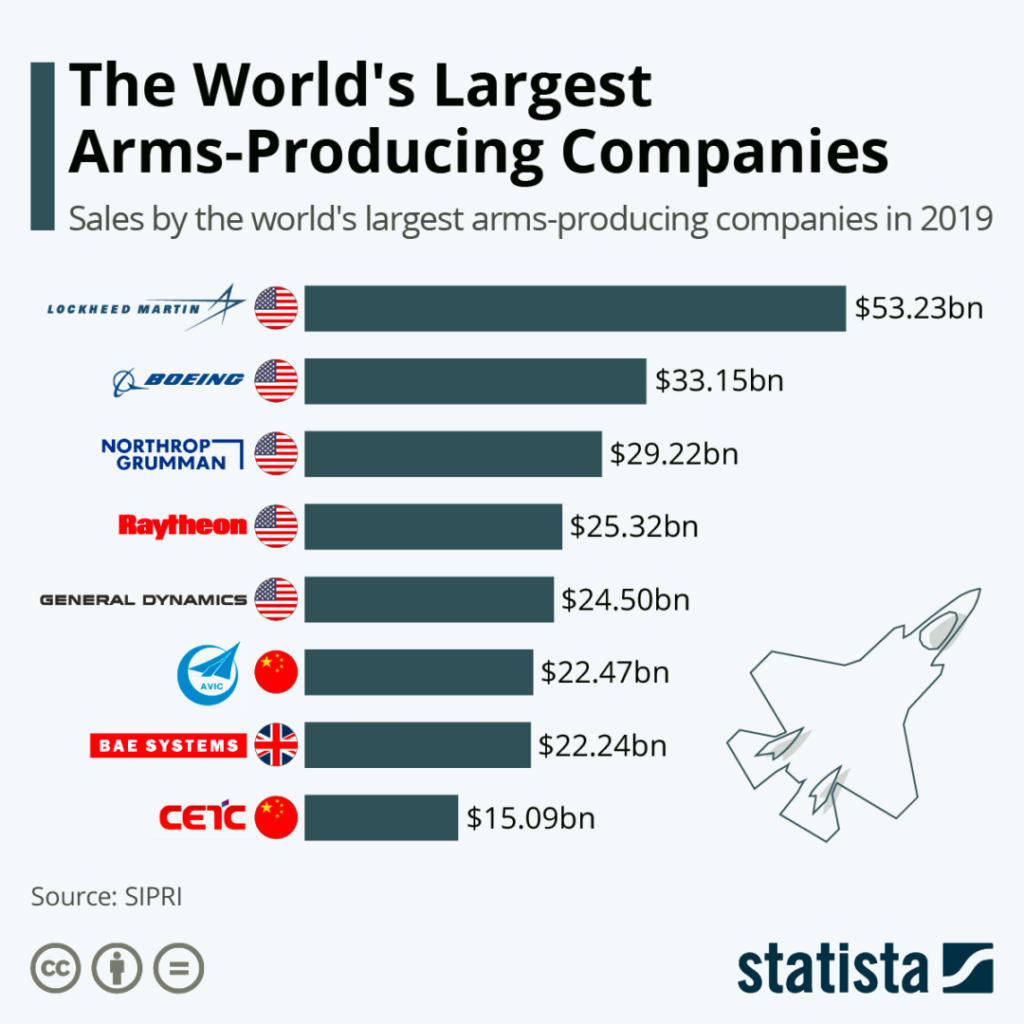 That the U.S./NATO-instigated war in Ukraine could result in a third world war is of major concern for all of humanity, especially workers and oppressed people who ultimately bear the brunt of any war. Yet for some global billionaires — today’s ‘masters of war’ — this conflict is seen as an opportunity to further boost profits.

Among those already reaping gains are companies involved in the production and sale of weapons, planes and other military hardware. This includes 14 of the world’s 20 largest “defense” companies headquartered in the U.S. Topping this list are Lockheed Martin, Boeing and Raytheon Technologies, which had combined arms sales in 2019 nearing $100 billion.

On Feb. 24, the day Russia invaded Ukraine, the stock value of these arms manufacturers soared. Raytheon and Lockheed officials openly told investors the Ukraine conflict was “good for business.” In a company “earnings call,” issued Jan. 25, Raytheon CEO Greg Hayes described how they could benefit from the conflict. Similarly, Lockheed CEO James Taiclet told investors the “great power competition [between the U.S. and Russia] over Ukraine bodes more business for the company.” (The Wire (India), Feb. 28)

Two lobbyists for every Congress member

These fortuitous gains for arms manufacturing companies are no coincidence. Their buildup for this NATO/Russia conflict has been decades in the making. The industry currently employs two lobbyists for every member of Congress.

Since the end of the Cold War, weapon manufacturers have been the most aggressive lobbyists for NATO expansion. Their potentially lucrative market included countries in Eastern Europe and former republics of the Soviet Union, disbanded in 1991. This, despite a 1990 promise by then-Secretary of State James Baker to Soviet leader Mikhail Gorbachev that if he allowed a reunited Germany to join NATO, the organization would not move eastward.

The New York Times covered Jackson’s lobbying of the Clinton administration to encourage NATO leaders to vote on expanding the alliance to Hungary, Poland and the Czech Republic in July 1997. Clinton’s Secretary of State Madeleine K. Albright attended one of Jackson’s lavish dinners to promote NATO expansion to the senators being wined and dined. (tinyurl.com/ycy6tby9)

Lockheed Martin gave $2.3 million to congressional and presidential candidates in the 1996 election. Always on the lookout for more opportunities to advance weapons sales, Jackson later became chairperson of the Committee for the Liberation of Iraq, which promoted the 2003 U.S. invasion during the George W. Bush administration.

In 1999, Poland, Hungary and the Czech Republic were admitted to NATO, despite U.S. and European Union promises to Russia that this expansion would never happen. Over the course of the next two decades, 14 Central and Eastern European countries joined NATO. In 2021, NATO extended membership offers to Bosnia and Herzegovina, Georgia and Ukraine, all located on Russia’s eastern border.

According to a report from the Center for Responsive Politics released in early 2021, five of the biggest U.S. defense contractors — Lockheed Martin, Boeing, Northrop Grumman, Raytheon Technologies and General Dynamics — spent a combined $60 million lobbying to influence policy in 2020. This sum is in addition to $2.5 billion the companies spent for lobbying since 2000. (Military.com, March 7, 2021)

The Center’s website OpenSecrets.org notes that in addition to the significant portion of the Pentagon’s $740 billion going to purchase weapons, U.S. arms manufacturers made $175 billion in weapon sales to other countries in 2020.

As they joined NATO, new member countries were strongly encouraged to buy weapons from U.S. manufacturers. Unbeknownst to U.S. taxpayers, their money indirectly subsidized the arms industry through a series of Pentagon grants, discount loans and free leases.

As the arms industry predicted, the incorporation of former Soviet republics and formerly socialist countries in Eastern Europe into NATO drastically increased the potential for armed conflict between the U.S.-led NATO and Russia.

Perhaps reluctant to solely rely on lobbying to influence government officials, the arms industry encouraged former government officials to become industry representatives. Over the past 30 years, nearly 530 members of the Armed Services and the Foreign Relations and Defense Appropriations subcommittees from both congressional houses left office for jobs as defense company lobbyists. By 2005, 80% of the highest-ranking Army generals retired to take jobs with arms makers.

The revolving door has worked both ways. Biden’s Defense Secretary Lloyd Austin sat on Raytheon’s board before joining the administration. In 2020, one-third of Biden’s Pentagon transition team came from agencies linked to the defense industry. Biden simply followed the practices of his predecessors.

Never mind Biden’s declaration in a foreign policy speech while campaigning in July 2019 that “it’s past time to end the ‘forever wars,’ which have cost us untold blood and treasure.”

David Vine documents the history of endless U.S. conflicts in “The United States of War,” published in 2021. He quotes General Mike Holmes’ claim that the goal is “not losing. It’s staying in the game and getting a new plan and keeping your objectives.” Biden is now talking about prospects for World War III!

The sheer number of casualties from U.S.-instigated wars over past decades is staggering. Untold millions have been displaced as a result of conflicts driven by the profitability of war, including 1.5 million Ukrainians forced to flee between 2014 and the start of the current conflict.

Pro-war propaganda is deafening, but it is imperative that a unified global antiwar movement take on this challenge and strongly advocate for humanity. Workers have nothing to lose but our chains.