Montgomery County, VA — Early this morning, pipeline fighter River Nason scaled a crucial piece of welding machinery at a Mountain Valley Pipeline site in Virginia, and locked their body to the equipment. About 1 mile south, on Interstate 81, a banner was hung simultaneously, reading “DEFEND WHAT YOU LOVE, STOP MVP, RESISTANCE = SURVIVAL.” River’s action prevented MVP workers from progressing welding further along the pipe. River was locked to the equipment for 7.5 hours before they were extracted and arrested at approximately 2:30 P.M. River was arraigned and charged with misdemeanors and is being held without bail. 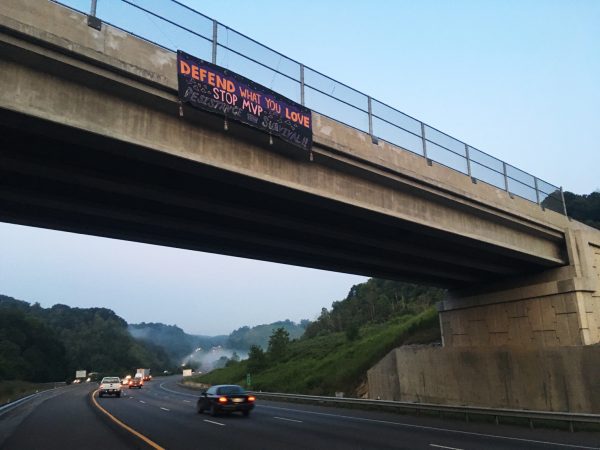 River stated: “It is a common misconception that we all contribute to and suffer from environmental damage equally. It is large corporations like EQT that are destroying our homes while their CEOs look on from their penthouses. This is why ‘reduce, reuse, recycle’ is not enough. We will never be able to recycle enough empty milk jugs to make up for the hundreds of miles of forests and farmlands that the MVP has devastated in its wake. This is why I can not stand idle. This is why we must take action.”

A banner hanging from River’s blockade read “LOVE THE LAND: SOLIDARITY WITH MAUNA KEA,” in reference to the ongoing blockade by Native Hawaiians of a sacred site in Hawai’i that is threatened by the construction of a massive telescope. The Hawaiian blockade, which is in its 18th day of preventing telescope construction, is not just about a telescope, nor is it about “science vs. religion” — it is about the ongoing desecration and exploitation of Native culture, rights, and history. Like the Mountain Valley Pipeline, the telescope is rooted in structures of white supremacy, colonialism, and hereto-patriarchy. Appalachians Against Pipelines is not solely fighting against the MVP; we are fighting against the world that produced it, and all that it represents. 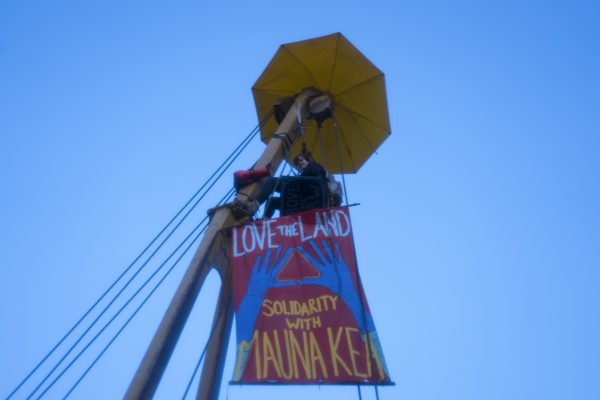 Caleb Flood, a Montgomery County resident, stated the following in support of River’s action: “Appalachia is a profoundly biodiverse and ancient land that is being subjected to careless abuse and destruction from short-sighted projects like the MVP. I support the ongoing resistance against the Mountain Valley Pipeline because I want to protect this place from ecological disaster, and begin a process of redemption from the atrocities of colonization and industrialization.”

The Mountain Valley Pipeline is a 42-inch diameter, 300-plus mile, fracked gas pipeline that runs from northern West Virginia to southern Virginia. In June 2019, a 70-mile extension into North Carolina (which was initially proposed in 2018) was denied its Section 401 Water Quality Certification by the NC Department of Environmental Quality. The Mountain Valley Pipeline contributes to climate change, increases demand for natural gas (and as a result, fracking), and is entrenched in corrupt political processes. It also endangers water, ecosystems, and communities along its route. Just this morning, 1 person died and several others were injured after an explosion of a 30-inch natural gas pipeline owned by Enbridge in rural Kentucky. The Mountain Valley Pipeline poses a similar threat to those along its route.

Resistance to the Mountain Valley Pipeline has only grown since the pipeline’s proposal in 2014. Grassroots-led pipeline monitoring and a nonviolent direct action campaign are ongoing. River is the 8th person in 2019 to lock their body in the path of the Mountain Valley Pipeline. An ongoing tree sit blockade in Elliston, VA is currently in its 331st day of blocking MVP’s path. MVP currently lacks permission to cross many water bodies on the route, and has been forced to explore alternate approaches in crossing through the Jefferson National Forest. In June 2019, builders admitted that the project’s budget has ballooned to $5 billion and that the completion date has been delayed by at least 1.5 years (more than doubling the project’s initial estimated construction time).