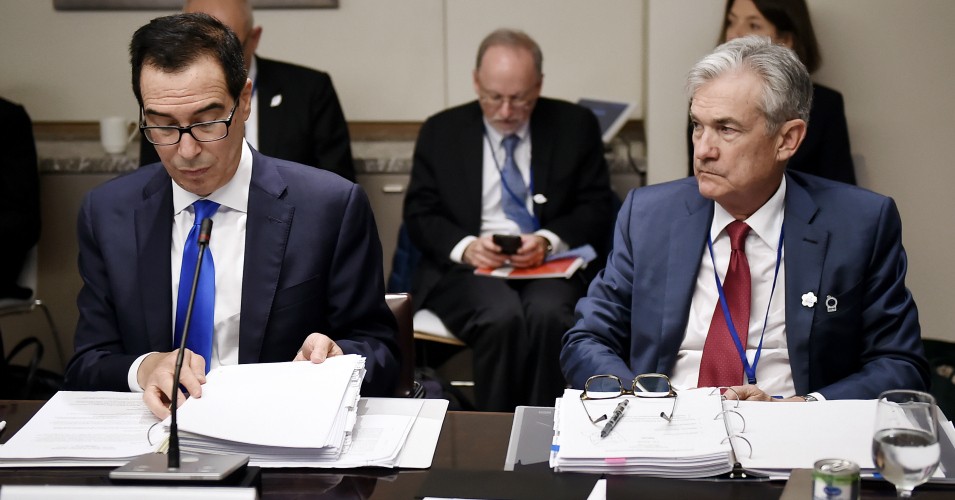 Note: The new law gives congressional leaders responsibility for choosing the panel’s members: House Speaker Nancy Pelosi, House minority leader Kevin McCarthy, Senate Majority Leader Mitch McConnell, and Schumer each can appoint one member of the oversight commission; a fifth member, the chairperson, is appointed jointly by Pelosi and McConnell. So far, however, only Schumer has made an appointment.  Under the new law, the disbursement of Treasury funds triggers a countdown clock that requires the oversight commission to produce its first public report within 30 days. Making the oversight more difficult is Donald Trump who says he will ignore the requirement and on April 7,he fired the acting inspector general for the Defense Department, Glenn A. Fine. Fine was set to become the head of a team of US auditors overseeing the $2.2 trillion bailout COVID-19 spending. KZ

“The public deserves to know.”

“The Fed will soon lend trillions to companies. But it has not committed to disclosing which private companies are getting taxpayer-backed support. That’s wrong.”

The lone watchdog on a congressional committee formed to oversee the Trump administration’s handling of a multi-trillion-dollar coronavirus bailout package demanded Wednesday that the Federal Reserve release to the public both the names of corporations receiving taxpayer bailout money and details on how the funds are being used.

“The public deserves to know which companies are receiving taxpayer-backed lending through the Fed and on what terms, and to be able to monitor what those companies do after receiving taxpayer support,” Bharat Ramamurti, thus far the only person who has been appointed to the newly created Congressional Oversight Commission, wrote in a letter to Federal Reserve Chair Jerome Powell and Treasury Secretary Steve Mnuchin.

The commission is supposed to have five members chosen by congressional leaders of both parties, but the other slots have not yet been filled even as taxpayer money flies out the door.

Under the CARES Act—a nearly 900-page stimulus package President Donald Trump signed into law last month—the Fed was given sweeping control over hundreds of billions of dollars in taxpayer money, which the central bank can leverage into trillions of dollars in funds to prop up large corporations.

Ramamurti, a former economic adviser to Sen. Elizabeth Warren (D-Mass.), expressed concern that the Fed has not committed to releasing key details about transactions involving such an enormous pot of taxpayer money.

“The public deserves a full documentation of how the Fed uses this money—who gets or doesn’t, and on what terms and conditions—to assess whether the Fed is using public money wisely and in accordance with Congress’ goals in the CARES Act,” Ramamurti wrote in his letter, which can be read in full at the bottom of this story.

“It would undermine public confidence in the Fed for it to provide taxpayer-backed support to a company without the public ever finding out who that company is and what exactly the company received,” Ramamurti added.

The Fed will soon lend trillions to companies. But it has not committed to disclosing which private companies are getting taxpayer-backed support.

That’s wrong. I wrote to Fed Chair Powell today asking for detailed and timely disclosures on every loan. https://t.co/pqgoWQ3xHb

Ramamurti’s demands come as watchdog groups continue to raise alarm about the lack of oversight measures in place to prevent Trump and members of his administration from using coronavirus stimulus money for political purposes or personal enrichment.

As Common Dreams reported, Trump last week abruptly fired an official who was appointed by a group of U.S. inspectors general to head the Pandemic Response Accountability Committee (PRAC), another oversight panel established by the CARES Act.

“Clearly he’s planning to corrupt the $2 trillion in spending Congress just approved, whether it’s by steering the money to political favorites, negotiating more favorable terms with certain parties or punishing his enemies with a failure to provide aid,” Bartlett Naylor, financial policy advocate with Public Citizen, said of the president in a statement last week. “Who could have seen this coming? Literally everyone.”

Critics have also pointed to an “extremely alarming” provision in the CARES Act that allows the Fed to avoid longstanding transparency requirements as it conducts meetings and makes decisions about corporate bailouts amid the ongoing pandemic.

“I think it’s particularly disturbing because we’ve seen over the last eight or 10 years that corporate America tends to look out for shareholders and executives first,” said Ramamurti. “We’ve seen an incredible amount of money go into stock buybacks and dividends, and at the same time we’ve seen wages for workers basically stagnate. So I don’t think we’re in a position where we can just trust corporations to do the right thing with this money.”

“The limitations on smaller businesses are actually more onerous than they for big businesses. It’s disturbing, b/c we’ve seen that corporate America tends to look out for shareholders & executives first”
ー@BharatRamamurti, of the new Oversight Commission@chrislhayes #inners pic.twitter.com/3eYRlwVlX6

The Federal Reserve has already announced plans for more than $2 trillion in emergency lending, with potentially trillions more to come. Yet it has not announced what information it will publicly release about individual transactions with private companies through taxpayer-backed lending facilities—including whether it will even release the names of individual beneficiaries.

I write to respectfully request that the Federal Reserve publicly release detailed and timely information about each individual transaction. The public deserves to know which companies are receiving taxpayer-backed lending through the Fed and on what terms, and to be able to monitor what those companies do after receiving taxpayer support.

As you know, Section 4003 of the Coronavirus Aid, Relief, and Economic Security Act (“CARES Act”) authorizes the Treasury Secretary to “make loans, loan guarantees, and other investments in support of eligible businesses, States, and municipalities that do not, in the aggregate, exceed $500,000,000,000.” The Treasury can use as much as $500  billion “to make loans and loan guarantees to, and other investments in programs or facilities established by the Board of Governors of the Federal Reserve System for the purpose of providing liquidity to the financial system that supports lending to eligible businesses, States, or municipalities.”

The $500 billion from the CARES Act supplements billions in taxpayer money that was already at the Treasury Department’s disposal in the Exchange Stabilization Fund.

In recent weeks, the Treasury Department has used taxpayer money from the Exchange Stabilization Fund and from the CARES Act to support several Fed lending facilities for businesses. Specifically:

Collectively, these facilities could pump trillions of dollars into the economy through tens of thousands of individual transactions.

The public deserves a full documentation of how the Fed uses this money—who gets or doesn’t, and on what terms and conditions—to assess whether the Fed is using public money wisely and in accordance with Congress’ goals in the CARES Act. It would undermine public confidence in the Fed for it to provide taxpayer-backed support to a company without the public ever finding out who that company is and what exactly the company received.

Accordingly, I respectfully request that the Fed provide regular public reports (no more than 30 days apart) that provide at least the following information on individual transactions through each taxpayer-backed facility that supports businesses:

In addition, I request that the Fed provide the following information for transactions under specific facilities:

Thank you for your prompt consideration.