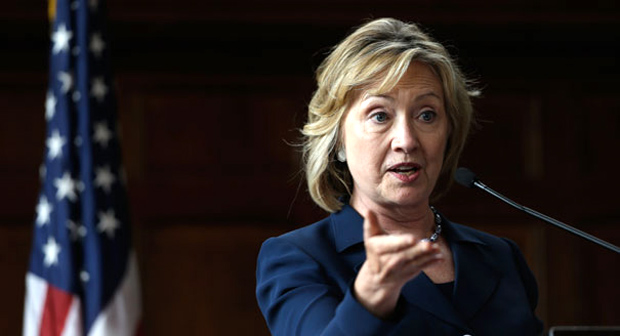 Longest War In US History Not Long Enough For Clinton?

Clinton open to staying in Afghanistan past 2016

Hillary Clinton on Thursday said she would be open to keeping U.S. military forces in Afghanistan past 2016, President Obama’s deadline for withdrawal.

At an event at the Council on Foreign Relations, the think tank’s president Richard Haass asked Clinton whether she would be open to keeping a residual force after 2016.

“I would. It depends upon conditions on the ground,” said Clinton, who is considered the Democratic front-runner for president in 2016 and is touring the country to promote her new book, Hard Choices.

If the next elected president of Afghanistan “were to come up with a well thought-through plan of what is needed, I believe that would be very seriously considered,” Clinton added.

“The leadership in Afghanistan is watching.”

Clinton’s comments come just a few weeks after Obama announced his new timeline for leaving Afghanistan. A majority of U.S. forces will pull out by the end of the year, with a force of 9,800 remaining at the start of 2015.

Iraq, meanwhile, is on the brink of a civil war as al Qaeda factions seize major cities.

Many Republicans on Capitol Hill have criticized the Obama administration for pulling out of Iraq too soon, but Clinton said that was a different situation.

The Bush administration set the deadline to pull troops out of Iraq, Clinton noted, and the Obama administration tried to work with Prime Minister Nouri al-Maliki to determine the status of residual forces after 2011.

“Maliki would not agree,” Clinton said, adding that she was surprised outgoing Afghan President Hamid Karzai wasn’t willing to sign a bilateral security agreement with the U.S.

With a new Afghan president, who will likely be determined by the runoff election on Saturday, Clinton says there might be “legal support” for America to stay in Afghanistan.