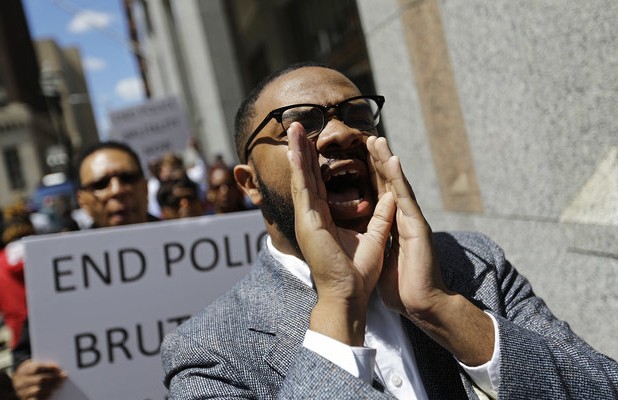 Above Photo: DAVID GOLDMAN/AP
Melech Thomas chants during a demonstration outside the State Attorney’s office calling for the investigation into the death of Freddie Gray on April 29, 2015, in Baltimore.

Seriously, we aren’t making this s**t up.

A damning report from the Justice Department found that the Baltimore Police Department routinely used excessive force, retaliated against citizens for exercising their First Amendment rights and committed other civil rights abuses.

Baltimore police officers often stopped, frisked and arrested residents unconstitutionally. The report, formally released on Wednesday, also says officers within the department were purposefully careless in sexual assault cases, used slurs against LGBT people and, in some cases, were told by supervisors to target black residents and “lock up all the black hoodies.”

While the probe is telling and warrants national attention, it simply confirms what black people in Baltimore have been saying for decades.

Freddie Gray, the black man whose death sparked the Justice Department’s probe, is a prime example of policing gone wrong in the city. He was arrested on multiple occasions for things ranging from drug possession to playing dice at a public housing development, according to a BuzzFeed investigation. On April 12, 2015, he was given a “rough ride” in a police van ― a common Baltimore policing tactic highlighted in the DOJ report ― and died a week later.

His death sparked protests and riots. It also brought national attention to the issues with Baltimore’s police model.

One reason why Gray was picked up so frequently is Baltimore’s “zero-tolerance” policing methods, which are outdated and ineffective “tough-on-crime” policies that disproportionately target black people and Latinos.

Baltimore police officers made at least 300,000 pedestrian stops from January 2010 to May 2015. Most of them lacked probable cause, the report says, and about 44 percent were made in two black areas of the city. These two areas make up just 11 percent of Baltimore’s roughly 621,000 population.

Gray’s neighborhood of Sandtown-Winchester is likely one of these regions. The neighborhood, which has a population of 9,800, has a violent crime rate of 23 incidents per 1,000 residents ― six times the national rate. About 50 percent of residents 16 to 64 years old are unemployed, and of that group, most have minor drug convictions.

The No Boundaries Commission and the West Baltimore Commission on Police Misconduct, two Baltimore based advocacy groups, released a report in March detailing the routine abuse inflicted on residents of Sandtown by the Baltimore Police Department. Researchers spoke with 450 residents, but only 39 were willing to be quoted, even with a pseudonym, out of fear of police retaliation.

“It used to be that if you did something illegal, they patted you down, they arrested you, and they locked you up,” one resident told the commission. “Now, they don’t even arrest you, they just take you in the alley and they beat you up. It doesn’t matter what you do.”

An April 2015 dispatch by Baynard Woods for the Baltimore City Paper highlights further resident frustrations with the police in Gray’s neighborhood:

A couple of blocks away, a woman who wants only to be identified as Latonya is sitting on a stoop with her neighbor, her niece, and her toddler-age daughter.

“We can’t come out of our doors without being harassed,” she says. “I can understand a simple fact if we are doing something wrong, then, hey, correct that. But for you to just treat us the way that y’all treat us, that’s not right. Because we’re the ones that have to live here.”

The neighbor, a teenage girl, adds: “They think that we’re involved in something or like we fit the description of something—”

“The first thing they say is you fit a description,” Latonya says. “What is the description? Being black female or being black male?” She turns to the neighbor. “They harassed her and my daughter one day. They were coming from the store through the playground and they like, ‘y’all fit a description’ . . . They make you sit on the ground, they search you—”

“Can’t put your hands in your pocket,” the neighbor continues with an exasperated teenage sigh.

“Harass you, talk to you like shit, have 1,001 police and it could be one person.”
Baltimore police reported using force 2,818 times over a six-year period, but only 10 instances were flagged by internal review as worth investigating, according to the report. Police determined only one was a case of excessive force.

Ashley Overbey called the police to investigate a robbery at her Northeast Baltimore apartment in April 2012. After responding officers left, a crime technician came to dust for prints.

Later in the evening, the technician requested police assistance “because he was alone in the apartment and was concerned about the commotion outside the bedroom door,” and an officer who responded to that call ended up slamming Overbey into a wall.

“I put my arms behind my back and he walked me over to the wall closest to the exit. As he’s attempting — or what I thought was an attempt — to put the handcuffs on, I turned my head and I asked him what was I under arrest for,” Overbey said. “And then he grabbed me by my hair and threw me out into the hallway and up against the wall across the hall. And that’s when he just started beating me.”

Stories like those of Gray, Overbey and Latonya have been out there for quite some time ― but they seemingly never were taken seriously until the Justice Department looked into them.

“I think we have a tendency and a sort of instinct to rationalize these systems that we all come to rely on, and to think that they must be operating in a way that is just and fair, or that it makes some sort of rational sense,” said Blake Strode, an attorney with an organization working to reform abusive courts in the St. Louis area.

It’s a shame that it requires a federal agency digging into a police department’s practices before anyone ― including members of the department themselves ― steps in to implement reform or even takes true responsibility for what officers continue to do to black people.

And, even still, the Justice Department’s probe has its limits. Despite the racism faced by black Baltimoreans, if residents need law enforcement assistance, the officers who abuse them will likely be the ones showing up at their door. As one resident pointed out to the No Boundaries commission, unless you live in Baltimore, you’ll never fully know what happens to the citizens.

“I understand we need to speak up on the way the police treat the community,” the individual said. “But certain things ain’t nobody going to talk about.”

And that should terrify us all.