NOTE: Last week, there were reports on social media of looting and violence in parts of Venezuela. Of course, it was blamed on the government. The United States has built a sophisticated social media disinformation campaign in Venezuela. This author describes what actually happened.  – MF

In recent days Venezuela has suffered very localized situations of violence and protests, that at least in two or three cases, have ended up in looting.

“Looting, also referred to as sacking, ransacking, plundering, despoiling, despoliation, and pillaging, is the indiscriminate taking of goods by force as part of a military or political victory, or during a catastrophe, such as war, natural disaster, or rioting.” — Wikipedia.

There might be different elements that ignite looting such as poverty, hunger, hatred, psychological distress, criminality, and all of them are relevant to analyze causes but not to use as an excuse to foment or to protect those committing the criminal act.

As to Venezuela, at the beginning of the quarantine announced by President Nicolas Maduro on March 14, 2020. — 42 days of real social distancing very similar to the one implemented in Spain or Italy but much earlier and much more in comparison to the lax social distancing in the US — the very first days, there were several twitter trending topics with the hashtag “saqueos” — all of them referring to events that happened in other countries, or in other moments or some of them not really presenting solid evidence of looting at all.

The common denominator in most of the tweets was that they were replicated by influencers and accounts with a clear affinity with Venezuelan anti-Chavismo, so that for an analyst, this raises concerns immediately. This is evidence of a political motivation designed to create chaos using fake news campaigns.

For several weeks, the issue was kept away from the social media debate until the recent events happened in Cumanacoa, Sucre state, and one day later in Upata, Bolivar state, and more recently in Maturin, Monagas state, all of them states in the East of Venezuela and with a significant political presence of the rightwing party, Accion Democratica, even though all of them currently have PSUV governors.

In Venezuela, any news should be doubly scrutinized taking into consideration the source, due to the high degree of political polarization and the permanent attempts of right-wing factors to get rid of Chavismo. That is the reason that provoked skepticism of the incident in Cumanacoa, at least at the beginning

Right-wingers in Venezuela, most of them at least, are those that historically could not care less about the suffering of the poor people; actually most of them have the idea that poverty is a conscious decision taken by the poor, because they are lazy or not smart enough. But in recent years, especially since the tightening of US sanctions, blockade and regime change operations promoted directly from Washington, Venezuelan right-wingers have suddenly developed some sort of “class consciousness” — speaking about hunger and caring about poverty issues — which most of the time is not swallowed by Chavistas.

Within this framework, we found ourselves facing possible violence or looting situations that won’t benefit Venezuelans regardless of their ideological background, and even though Nicolas Maduro’s government has reinforced the CLAP program currently delivering food boxes to seven million households nationwide and alongside a new set of stimulus bonuses through the Patria system, the truth is that poor Venezuelans are facing a harsh situation due to several factors:

The incidents in the east of Venezuela that we refer to started as protests for the hike in prices (due to the devaluation) and involved grocery stores in many cases owned by Chinese immigrants. That also has to raise alarms among authorities and among political analysts because the anti-China smear campaign is not limited to the US and Europe. It is a massive campaign launched by the US and most of the time adopted by right-wingers and racist people all over the world, and for that reason, it should be confronted and neutralized using all the means available, at least in the countries that oppose US hegemony.

With this piece we hope to provide some insight about the current ‘looting” situation in Venezuela, trying to make the analysis easier for international audiences to help them understand the different elements that gravitate around this particular issue.

But we want also to present an international perspective on how similar events are minimized or covered up by social media and mainstream media in order to preserve the interests of the status quo when they occur in capitalist countries. We dug through the internet and social networks looking for evidence of looting worldwide in recent weeks (we choose a one-month time span) and present the results below.

We double verified locations and dates as much as possible and only present the posts (tweets mostly) really representing a looting situation, not a burglary, a protest or prison riots, events that also have been very common during the pandemic.

In our research, another element that caught our attention is that the looting is being used by right-wing influencers with the intention of promoting the lifting of quarantine or social distancing measures. A strategy very well aligned with the logic of capital, putting the interests of the corporations above the people, something that is the contrary of the approach taken by socialist countries worldwide that have put the interest of the people above the profits, as in China, Cuba, Vietnam and of course, Venezuela.

With the information below you will see very clearly that looting is not something that happens in socialist countries, or in poor countries alone. And you also will realize that you don’t ever hear a word about looting being committed in wealthier or capitalistic countries because the media magnifies or covers these incidents depending on their political objectives or directions that track back to the US Department of State.

What must be clear is that Venezuela, and to be more precise, Maduro’s government has achieved an amazing success dealing with the Covid-19 pandemic, that the Venezuelan socialist government won’t ever repress the people like right-wingers love to do, and it will find ways to deal with the economic stress faced by many families and, last but not least, Chavismo won’t ever succumb to US imperialism or blockades and is willing to defend its land with their lives.

• emergency alert to go off today
• asks Trudeau for ‘fair share’ (40%) of new masks
• ’unacceptable,’ calls out US for M3 masks pull back
• Ontario will be making its own masks, ventilators, gloves
• ’concerned’ of looting#covid19on pic.twitter.com/c1jcUf3q7z

A looting in Soacha a nearby town of Bogotá. #Coronacrisis https://t.co/Gvqx8aCSdg

People are desperate in some cities of ecuador and have taken to the street looking for food, medicine , and the president allegedly absent and humanitarian aid is no where to be found – forcing people to resort to looting of pharmacies and shops. Ecuador is on crisis 😔😞 https://t.co/C9F2bfZoPa

#Breaking: Left-wing extremists of the Antifa are calling for looting on the Internet due to the #lockdown because of the #coronavirus in #Germany #COVID2019 #COVID19https://t.co/AF5LSFueIZ

The looting this is real— this is our city in Honduras after 2 weeks of enforced lockdown, supermarkets closed, do not underestimate the lengths ppl will go to when they are hungry pic.twitter.com/kOkP7OcKdf

Honduras: ‘Countries that have taken radical measures from Total Quarantine…. are beginning to experience social outbursts…

…looting in #Honduras after 8 days of total confinement.

An incident of looting occured in Kota, Rajasthan, on Sunday amid the ongoing nationwide lockdown. A flour mill’s truck was attacked by a group of bikers on its way to the market. The police have arrested 10 people in the case so far. Watch the video for more.

The Post Courier newspaper reports that a group gathered in the morning to target the shops.

It’s not clear how many were looted before police forced Asian-owned shops to close across the city.

Lae city councilor Peter Wagyu says people are frustrated by the government’s two-month extension to the State of Emergency.

He said they blame Asians for the global pandemic.

People are starting to go hungry.

I am deeply saddened by what’s happening in #Kampala, #Uganda right now. Military hunting people down like dogs and shooting at them. #People looting and stealing cars. Why are you acting like wild animals. This is a time for showing each other love, caring, and compassion 🙏🏾💚 pic.twitter.com/amhKiAqJpV 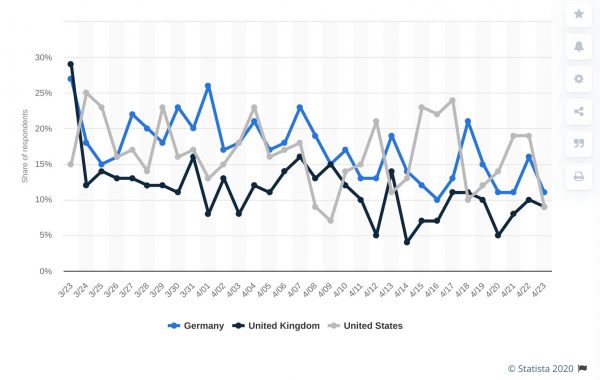 Looting in Santa Cruz. This will become common https://t.co/9SCZdemtch

#US– Suspected looters in face masks have been pictured after allegedly attacking businesses during the coronavirus lockdown.
Police in California and South #Carolina have charged a number of people with looting as the nation battles the COVID-19 crisis.
📸 pic.twitter.com/rRudzVhumh

Right wingers have been for weeks dreaming on this…when you analyze all images and videos in this trend you will see that it looks more like an orchestrated protest ending up in very localized attempts of looting…this have a name and last name: US Imperialism… #Cumanacoa https://t.co/EoHJUD3IAv