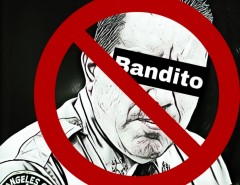 Los Angeles: One Step Closer To Community Control Over Sheriffs

Los Angeles, California – In a historic move, the Civilian Oversight Commission voted in favor of a resolution to support a charter amendment giving the LA Board of Supervisors, the Civilian Oversight Commission (COC) and Office of Inspector General stronger oversight of the LA County Sheriff’s Department. The vote also included the ability of the Board of Supervisors to remove a Sheriff for misconduct. Members of Centro CSO, impacted families of police killings, Black Lives Matter-LA, the ACLU, and Check the Sheriffs Coalition joined the meeting and spoke in favor of the Board of Supervisors placing a November 2022 ballot measure to win community control over the LA County Sheriff’s Department and Sheriff Villanueva.

“It is time we hold Sheriff Villanueva accountable” said Luis Sifuentes of Centro CSO who spoke in favor during public comment, “this department has way too much power if they can interfere and block investigations on them, that’s why I urge the COC to create a commonsense structure of checks and balances.”

Stephanie Luna, who is the aunt of Anthony Vargas, also spoke. Vargas was killed by East LA Sheriffs August of 2018, and during the COC meeting Luna stated, “We have a current sheriff that has allowed deputy gangs to thrive with no consequence, has allowed the criminalization and displacement of our houseless neighbors, defied multiple subpoenas, allowed the harassment of grieving families by his deputies – which he himself participates in with my family, actively takes part in coverups involving beatings within the county jail, and has dared to target anyone who seeks to expose their misconduct. Villanueva has publicly targeted my family, and the family of Paul Rea, including [Rea’s] minor sibling in multiple press conferences. He has used our loved ones’ murders to advance his own political agenda stating that we are the only families that have come forth with these claims of harassment and disputing our claims of the existence of deputy gangs. Deputies regularly harass family members of those they have killed!”

During the meeting, the COC asked attorneys who were representing the ACLU and helped draft the charter amendment multiple questions. The charter amendment would give the elected officials the ability to remove the LA County Sheriff, give the Board of Supervisors more power – by giving them the ability to create policies against LASD, and to make the LASD Civilian Oversight Commission permanent. The amendment change would allow for the inspector general to investigate LASD and the LA Sheriff and ensure membership of community members directly impacted by LASD and the criminal legal system.

Expressing her happiness for the charter amendment victory was also Leticia Vazquez, mother of Marco Vazquez Jr. Vazquez was killed on October 9, 2019 by deputies from the Pico Rivera Sheriff’s Department. Vazquez said after witnessing the victory, “A charter amendment and other reforms are much needed to change the abuses and misconduct of Sheriff Villanueva and LASD. Former Sheriffs Lee Baca, Paul Tanaka, Alex Villanueva, and whoever wins the sheriff race should not have absolute power. This victory opens the doors to other changes that are much needed to help check the sheriff!”

Carlos Montes with Centro CSO said, “We have raised the demand for community control of the police for years, and this is a major step forward. In the 90s during the LA County Koltz Commission hearing on deputy gangs, the demand for civilian community control was raised and we only won Advisory Committees at each LASD station. These committees were appointed by local captains; this was a sham and unacceptable. That’s why we continue with the fight for community control of police and organize with the Check the Sheriffs Coalition to win the democratic right for civilian community power over the police.”

The next steps for the fighters of community control of LASD and Sheriff Villanueva are to convince the LA County Board of Supervisors to pass a measure to place the charter amendment in the November 2022 ballot. Centro CSO has teamed with the Check the Sheriff Coalition and the National Alliance Against Racist & Political Repression to ensure LA defeats the crimes brought on the people by killer cops and deputies.

If you wish to join Centro CSO’s Police Brutality Committee and become part of the movement, attend their monthly meetings which happen every first Thursday of the month, 7 p.m. (Pacific Time) via Zoom. You may contact CSO at 323-943-2030, CentroCSO@gmail.com, or @CentroCSO on Instagram, Twitter, TikTok, Facebook.