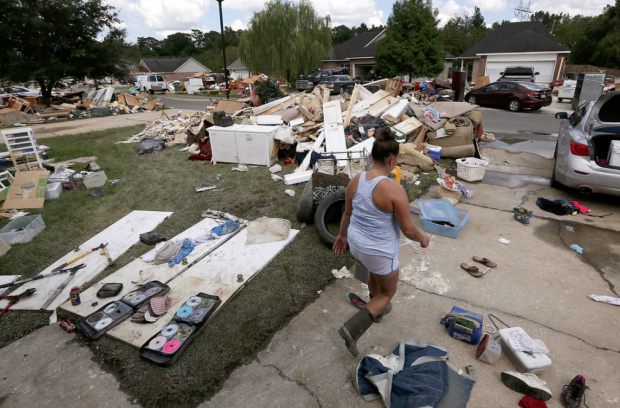 Above Photo: A resident walks through a flood-damaged neighborhood in Louisiana. The state’s governor has requested an addition $2bn in emergency aid from the federal government. “Simply put, we cannot recover without it,” Edwards said at a House subcommittee hearing. Photograph: Jonathan Bachman/Reuters

With 80% of affected homes uninsured, federal government to cover 90% of Fema costs – but governor says more is needed

The cost of August’s historic flooding in Louisiana is surging into view now, and rising as fast as riverwater. It could hit $15bn, according to a new report, and state officials and residents have begun scrambling to find money as southern Louisiana slowly dries out.

Flood insurance will cover only a fraction of the cost, because 80% of the homes affected – more than 110,000, and almost as many vehicles – had no such insurance. The region has never flooded in living memory, and in many areas flood insurance was not even available.

On Friday during a trip to Washington, Governor John Bel Edwards requested a $2bn bailout package in addition to the money the federal government has already pledged. In a two-day series of meetings with aid brokers in every corner of the capital – representatives, senators, and the president’s advisers – Edwards stressed that his state wouldn’t survive without a swift drop of cash.

“Simply put, we cannot recover without it,” he told a House subcommittee hearing.

While Edwards and his constituents await word on the aid bill, the White House did grant the state some measure of relief. In a letter to Edwards, Barack Obama said the Federal Emergency Management Agency (Fema) has so far spent more than $660m in public relief efforts, from housing and food to debris cleaning to the deployment of the National Guard.

Normally the state would have to pay back 25% of that cost. But the flood had become so expensive, Obama wrote, that the federal government would cover 90% of those costs, leaving 10% forLouisiana.

The financing is so stratospheric that it seems only theoretical to residents back in Louisiana, many of whom are still focused on where they might find a meal each day, or about whether a child’s cough comes from a cold or a more ominous sickness caused by mold contamination.

The most cagey home owners – some have experience with Fema, having moved north from New Orleans after Hurricane Katrina – have started maneuvering to avail themselves of the aid money. More than 130,000 households have applied for federal relief.

But many residents say bureaucratic restrictions make it nearly impossible to attain grants. Some are technical requirements about floodplains versus non-floodplains, or 49% damage versus 50% damage, or a house that is raised versus ground-level. The restrictions have kept some residents awake at night, at a loss not just for a home but seemingly their financial future.

Heather Feierabend, for instance, lives in Park Forest, a neighborhood on the east side of Baton Rouge that had never before flooded. Her father, Ernie, lives next door, and during the floods they moved as many of their belongings as possible upstairs before escaping on a boat manned by firefighters.

The water destroyed the ground floors of both homes, which they have now gutted with the help of friends and neighbors. But Feierabend, a teacher, was denied Fema money to rebuild. She doesn’t technically own her home. Her father has, since the 1970s.

And her father, she said, didn’t qualify for that home either. “He only qualifies for the house he lives in, next door,” she said. So her home – like many others – has fallen through a wide gap in the system. The Feierabends didn’t do anything illegal or untoward, or even uncommon, but they find themselves tumbling outside the federal government’s safety net.

For now, Feierabend said, she’s living among friends who have taken in her and her son. She sees herself as lucky, and repeats a refrain heard among many of her neighbors. “I don’t want to be self-pitying,” she said. “So many people have it worse. At least I have friends who have been so kind to me.”

For now her home sits disassembled, awaiting repairs. She has tried to lure a contractor there to give an estimate, but they are too overwhelmed with the glut of similar homes. Whatever the estimate is, she said, “it’s going to add up”.

How will she pay for that, on a teacher’s salary?