Above Photo:  Protest at a Bayou Bridge pipeline site in Maurice, Louisiana, by opponents from the L’eau est la vie (Water is life) Camp, May 12, 2018. Credit: Julie Dermansky for DeSmog

Louisiana’s critical infrastructure law is unconstitutionally vague and broad, the suit alleges, because it lets “any authorized person” exclude people from public places like sidewalks and roads if the state’s 125,000 miles of mostly unmarked pipelines cross there. The law could even be used to bring felony charges against a landowner for being on their own land, the lawsuit alleges.

“And, as more than a dozen arrests of peaceful protesters under the new law demonstrate, its actual aim is to chill, and harshly punish, speech and expression in opposition to pipeline projects,” the complaint adds.

The Louisiana law went into effect in August 2018 and was immediately used against opponents of Energy Transfer’s Bayou Bridge oil pipeline. It carries severe criminal penalties — “up to five years in prison, with or without hard labor, for being on or near a type of critical infrastructure which could be completely invisible and virtually anywhere,” the complaint says. 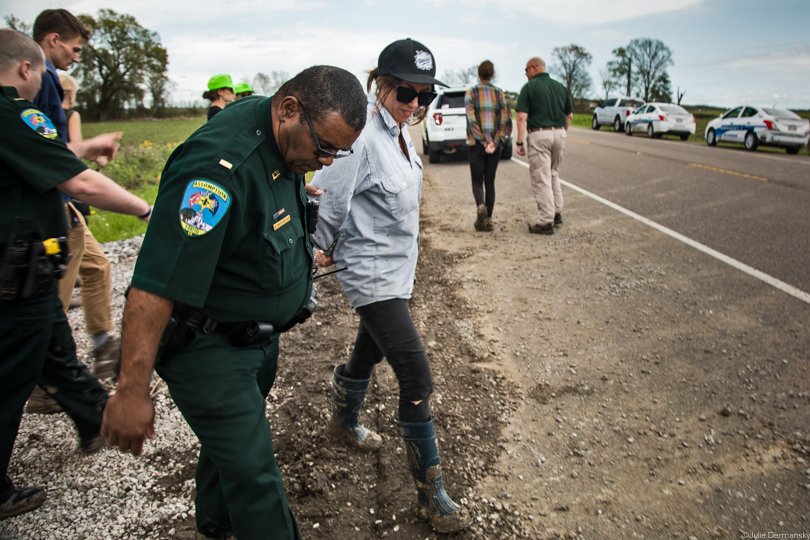 A protester was arrested while opposing the Bayou Bridge pipeline in Belle Rose, Louisiana, on February 26, 2018. Credit: Julie Dermansky

“The Louisiana law emerged as part of a national trend of similar legislation pursued by oil and gas interests aimed at cracking down on and chilling protests against fossil fuel infrastructure projects, which are taking place as part of an important national debate about the worsening environment and climate crisis,” the complaint alleges. “It is therefore no accident that the law was invoked immediately after its passage by a private security company working in tandem with local law enforcement at the behest of a private oil pipeline company.”

Louisiana’s “critical infrastructure” law, the suit adds, was drafted by an oil industry trade organization and resembles a model bill circulated in 20 states by the American Legislative Exchange Council (ALEC) — which means that if Louisiana’s law is struck down as unconstitutional, it could potentially set an important precedent affecting other states.

ALEC, which also circulates a model bill describing climate change as “a historical phenomenon” and subject to continuing debate, counts Bayou Bridge pipeline builder Energy Transfer among its donors, according to the Center for Media and Democracy’s Sourcewatch project.

At least six states have passed laws since 2016 that would restrict the right to protest near oil and gas pipelines and dozens of other similar bills or executive orders have been introduced nationwide. Missouri, Indiana, and Illinois are among the states that have seen critical infrastructure bills introduced this year. In Texas, delaying pipeline construction will be punishable by a decade in prison — a sentence similar to that for an attempted drive-by shooting, according to Bloomberg— under a bill that passed both the Texas House and Senate this month. 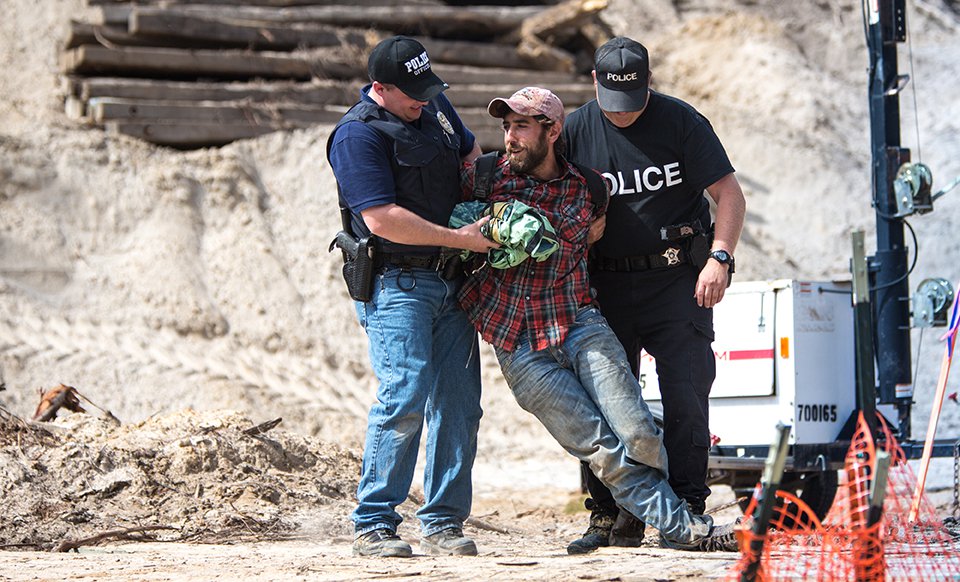 In March, the American Civil Liberties Union (ACLU) filed suit in South Dakota over another law criminalizing pipeline protests — a recent South Dakota law creating the crime of “riot boosting,” (which ACLU attorney Vera Eidelman told Inside Climate News “poses a unique threat to speech and appears to be targeted at protests.”)

Today’s suit is brought by three public interest organizations — RISE St. James, 350 New Orleans, and the Louisiana Bucket Brigade — as well as 10 individuals, who either face felony charges under Louisiana’s critical infrastructure law or who say their First Amendment rights to speech, expressive conduct, and assembly have been chilled by fear of facing felony charges, in part because it’s so difficult to know what conduct is legal or illegal under the Louisiana law.

Some of the plaintiffs in the case say that they live in communities at the center of the petrochemical industry’s planned expansion. They “have organized marches, press conferences, and events in the area to express their anger about and opposition to the attempted petrochemical buildout, including a march through Cancer Alley,” the complaint explains, referencing the Louisiana hotspot for petrochemical industry activity and health issues. But now, they are “concerned the law could be used against them and others in RISE and in the broader community as they necessarily march and protest in the vicinity of pipelines given that their community is overrun by the industry and its infrastructure.” 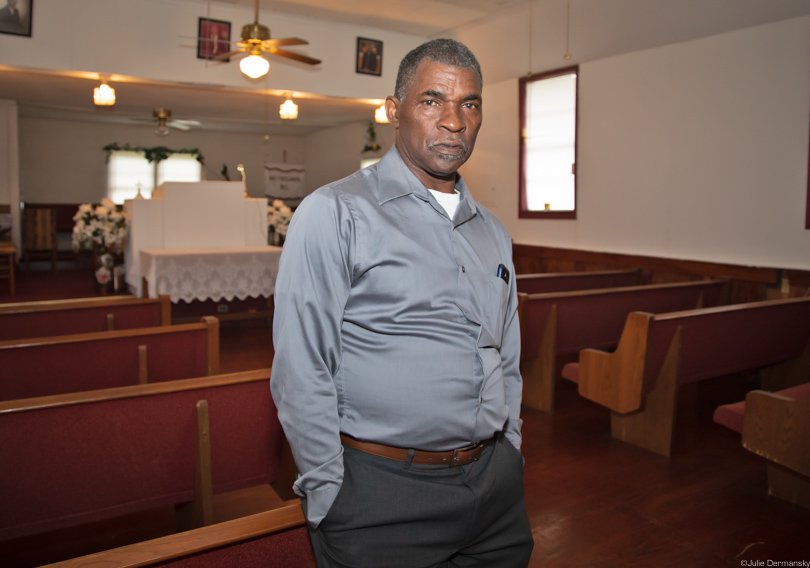 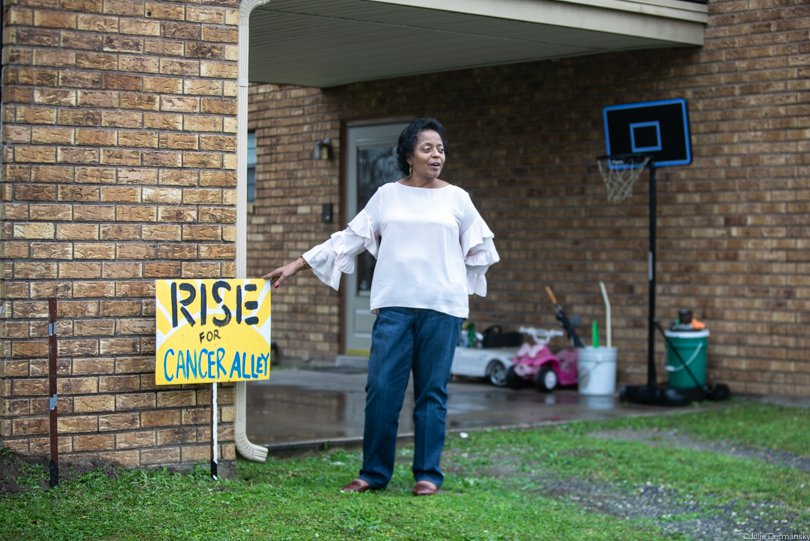 Louisiana Attorney General Jeff Landry is named as a defendant in today’s suit. Landry, who counted the oil and gas industry as his top donor during his time as a state representative, according to OpenSecrets.org, continued to make his personal support for the oil and gas industry clear in his role as attorney general. “I am — and make no bones about it — a un-bashing [sic] supporter of oil and gas and our energy sector here in this country,” Landry told an oil and gas conference in 2017, as DeSmog previously reported.

Protest at a Bayou Bridge pipeline site in Maurice, Louisiana, by opponents from the L’eau est la vie Camp, May 12, 2018. Credit: Julie Dermansky

Some of the earliest arrests under the Louisiana law occurred on land where it turned out the pipeline builder was itself trespassing.

“A representative of the pipeline company testified during trial that the company made a business decision to trespass on the property and begin constructing the pipeline without having concluded easement agreements with all of the co-owners or obtaining an expropriation judgment because the company considered it less expensive to violate the law than to adhere to it,” the complaint alleges.

In December 2018, Energy Transfer was fined $450 after a trial judge found that the company was in fact trespassing during Bayou Bridge construction.

“The fact that so many protesters have been arrested on property where they had permission to enter and where it was the pipeline company that was knowingly trespassing,” plaintiffs in today’s lawsuit wrote, “demonstrates clearly that the law as amended is subject to arbitrary and discriminatory enforcement.”

“By turning so much of the land in this state into critical infrastructure, the average person can find themselves facing five years in prison for literally just being in the wrong place at the wrong time,” said Center for Constitutional Rights attorney Pamela Spees, who is representing the plaintiffs. “The oil and gas industry pressed this law forward as a means of chilling and discouraging speech and expression in opposition to pipeline projects, but almost anyone can find themselves on the wrong side of this law.”

Attorney General Jeff Landry’s office told* DeSmog, “Attorney General Jeff Landry will vigorously defend the law as our State has an obvious and compelling reason to protect vital infrastructure from criminal trespass, damage, or possible attack. The environmental groups who filed this suit are free to protest, but they are not free to do it in a manner that obstructs and threatens infrastructure.”

*5/22/19 3:56 p.m. PDT: This story has been updated to reflect new comments from Attorney General Landry’s office.