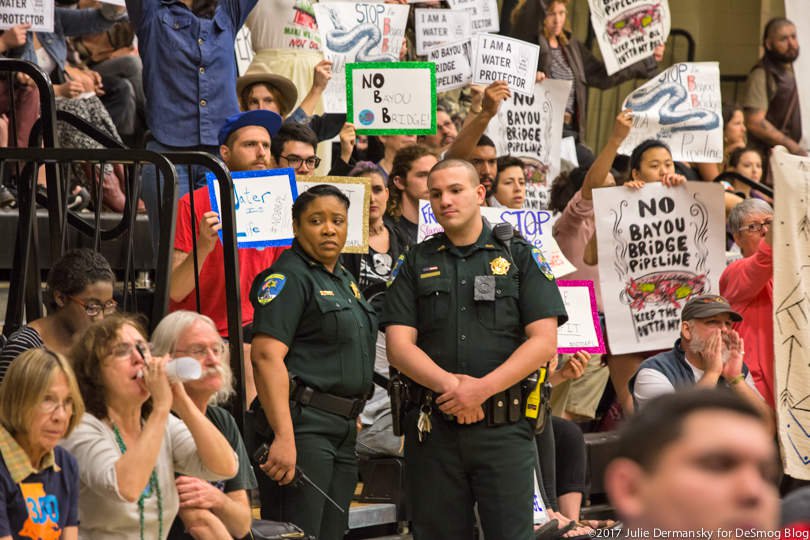 Above Photo: Law enforcement officers next to pipeline opponents at a Louisiana Department of Natural Resources permit hearing for the Bayou Bridge project on February 8, 2017. Credit: Julie Dermansky for DeSmog

On December 27, a state* appeals court ordered a Louisiana’s sheriff’s department and its sheriff to release information about its officers’ trip to North Dakota during the heated protests against the Dakota Access pipeline in 2016. The extended, indigenous-led protests near the Standing Rock Sioux Reservation drew a highly militarized response from public and private law enforcement. Out-of-state cops, including those from Louisiana’s St. Charles Parish, flooded North Dakota to support it via an interstate agreement.

The latest move reversed a decision by a district court, which denied a public records request made by the Center for Constitutional Rights (CCR), a human rights law firm which has worked on behalf of environmental groups* in Louisiana, after parish law enforcement spoke out against Dakota Access pipeline opponents and endorsed the Bayou Bridge pipeline, a similar oil pipeline in Louisiana.

“We saw a dangerous blurring of the lines between law enforcement and private corporations at Standing Rock,” Pamela Spees, a senior staff attorney with CCR, stated when first filing suit for the public records in December 2017.

Spees, who was raised in Lake Charles, one of the communities that will be affected by the Bayou Bridge pipeline, is leading a lawsuit by Louisiana environmental groups seeking public records from St. Charles Parish Sheriff Greg Champagne. She was also an attorney in a lawsuit against Bayou Bridge Pipeline, LLC, which so far has unsuccessfully challenged the company’s right to use eminent domain to confiscate land to build the pipeline, which is nearly operational.

The Dakota Access pipeline is owned by Energy Transfer (formerly known as Energy Transfer Partners), the principal owner of the also-contested Bayou Bridge pipeline, a 163-mile-long pipeline that cuts across southern Louisiana from St. Charles, near the Texas border, to St. James, on the Mississippi River. Despite ongoing legal battles in federal and state courts, the Bayou Bridge pipeline has been nearly completed.

Louisiana Sheriffs, a Pipeline Company, and a Private Security Firm

TigerSwan, a private security firm involved in the Dakota Access response but denied a license to operate in Louisiana, is a corporate donor to the National Sheriffs’ Association’s $3.46 million budget, according to the association’s most recent tax forms. Under Sheriff Champagne’s leadership, the association lobbied Congress for surplus military gear and other undisclosed issues related to the Dakota Access pipeline, according to a review of federal lobbying disclosure forms by Steve Horn for DeSmog.

The center’s public records request, filed September 18, 2017, was made after St. Charles Parish’s Sheriff Greg Champagne and others connected to law enforcement, including Joseph Lopinto, the newly elected sheriff of Jefferson Parish who spoke on behalf of the National Sheriffs’ Association at a Bayou Bridge permit hearing, publicly criticized pipeline opponents.

At the time of his October 2016 visit to Standing Rock, Sheriff Champagne was also the president of the National Sheriffs’ Association and made largely unsubstantiated claims about the Dakota Access protests against the pipeline. In a Facebook post Champagne wrote: “Despite the statements coming from the media and protesters that they were completely peaceful and prayerful, it has been a fact that more militant protestors [sic] (terrorists) have destroyed property and physically beaten employees of the company in recent weeks.”

In February 2017 Sheriff Lopinto voiced support for the Bayou Bridge pipeline at a permit hearing in which he claimed that Dakota Access protesters shot at law enforcement officers. “We don’t want the same thing occurring in Louisiana,” he said.

The records Spees is seeking include receipts for all travel expenses, which reportedly add up to nearly $36,000, and video and photos taken by St. Charles Parish deputies during their trip to North Dakota.

Though the appeals court ruling makes clear photos and video taken in North Dakota by Captain Patrick Yoes, commander of the St. Charles Parish Special Services Division, should be released, Spees worries those may never surface because it is unclear whether the department retained the materials.

Captain Yoes testified that “the files from the devices were loaded on a hard drive, and he provided all of the files relating to the EMAC [Emergency Management Assistance Compact] to the [North Dakota Morton] county’s sheriff and the public information officer.” However, Yoes said the original camera memory cards which he returned to Louisiana with may not have been preserved and it is unclear if the data on to the hard drives left in North Dakota have been preserved.

Spees doesn’t see anything controversial about the records request and considers its initial denial unfortunate, because it compelled the center to litigate on behalf of opponents of the Bayou Bridge pipeline.

Champagne could appeal the federal court’s decision with the Louisiana Supreme Court. I reached out to Champagne’s communications officer but did not receive a response.

*Update 12/29/18: This story has been updated to reflect that a state, not federal, appeals court reversed the decision and that CCR filed the public records request and lawsuit, which was not filed on behalf of environmental groups.