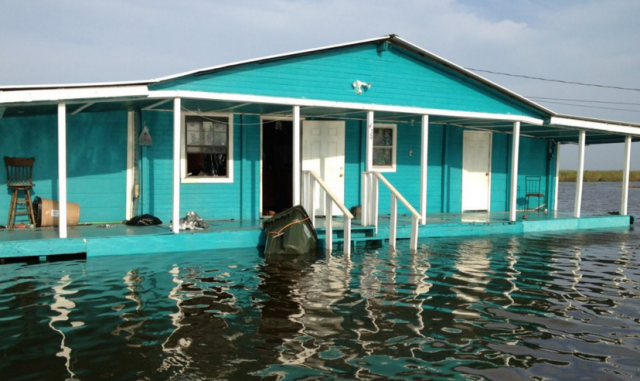 Since the 1950s, the Native American tribe has lost 98 percent of the land it calls home.

Over the last half-century or so, the island has fallen victim to irresponsible oil and gas extraction practices and the effects of climate change. Many of its residents — members of the Isle de Jean Charles Band of Biloxi-Chitimacha-Choctaw Native Americans — have been forced to flee.

“What you see of the island now is just a skeleton of what it used to be,” Chris Brunet, a tribal council member and lifelong island resident, told The New York Times in a mini-documentary called Vanishing Island in 2014.

A recent federal grant, however, will allow the state-recognized tribe to resettle on higher ground, making it the first community of official climate refugees in the United States, according to Indian Country Today.

Late last month, the U.S. Department of Housing and Urban Development (HUD) awarded $1 billion for resilient infrastructure and housing projects as part of its National Disaster Resilience Competition. On the list is $52 million for the Isle de Jean Charles tribe to relocate to a “resilient and historically-contextual community,” HUD wrote.

Since the 1950s, the tribe has lost 98 percent of its land to rising sea levels, coastal erosion and flooding. Experts suspect the island will be completely submerged within 50 years, Houma Today reports.

Albert Naquin, chief of the Biloxi-Chitimacha-Choctaw Indians, has been fighting to secure funding for 13 years and said the money will allow the tribe to reestablish community, something that — like their historic island home — is being washed away.

“I’m very, very excited,” Naquin told Indian Country Today. “Now we’re getting a chance to reunite the family. … They’re excited as well. Our culture is going to stay intact, [but] we’ve got to get the interest back in our youth.”

For 170 years, the Biloxi-Chitimacha-Choctaw have occupied this remote island, surviving off the land as fishermen, oystermen and trappers.

What was once a 22,000-acre island, however, has been reduced to a 320-acre strip. As of 2009, only 25 houses remained occupied, down from 63 only five years prior, according to a report by Northern Arizona University.

Pat Forbes, the executive director of the Louisiana Office of Community Development, said in a release that the tribe’s people are on the front line of Louisiana’s coastal land loss disaster.

“This $48 million grant,” she said, “will allow the state to help them resettle their entire community to a safer place with a minimum of disruption to livelihoods and lifestyles. Together, we’ll be creating a model for resettlement of endangered coastal communities throughout the United States.”

The tribe will reportedly retain ownership of the island even after it relocates to its new community, which could happen as early as 2019.

Representatives of the Isle de Jean Charles Band of Biloxi-Chitimacha-Choctaw Tribe could not be reached for comment Thursday.

While the Louisiana tribal members are reportedly the first official U.S. climate refugees, they are not alone in their struggles.

In Alaska, for example, climate change already affects more than 180 villages. Among the hardest hit is the Yupik community of Newtok, a village that the Army Corps of Engineers predicts could be completely underwater by 2017. The Yupik people have also been called America’s first climate refugees.

Watch the trailer for a new 32-minute documentary about the Native American community of Isle de Jean Charles, called “Can’t Stop The Water,” which was released on Monday.