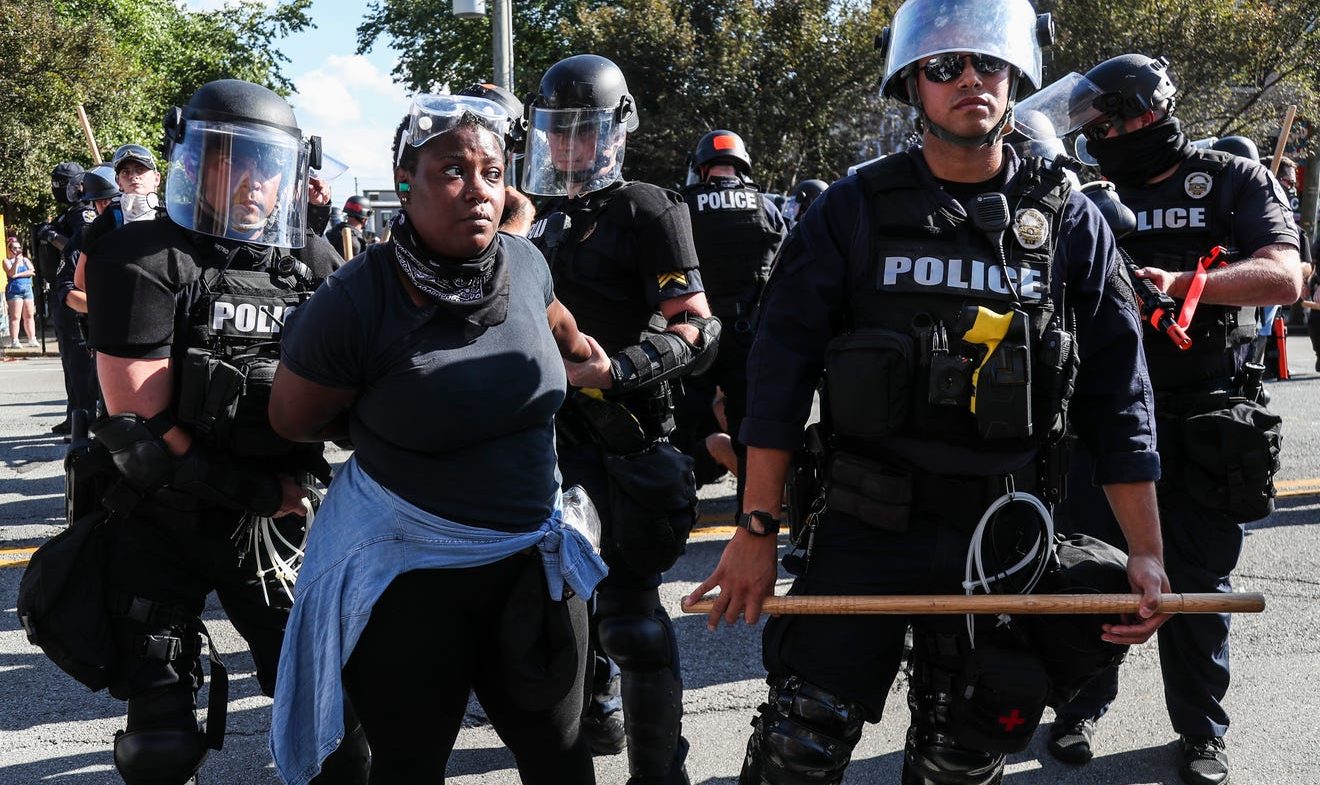 NOTE: Tension continued to grow today over the failure to arrest the police officers who murdered Breonna Taylor in her bed. Around 200 members of the NFAC all black militia, which is based in Georgia, arrived to join the Black Lives Matter protest. As they assembled in Baxter Park to march to the protest, a gun was fired accidentally wounding three people including a minor. It is reported there were about 50 members of the Three Percenter Militia present at the protests separated by police. – MF

Louisville, KY – More than 100 Black Lives Matter protesters were confronted by police after blocking off Market Street in Louisville’s Nulu neighborhood on Friday afternoon and setting up an impromptu block party.

Police started arresting dozens of protesters shortly before 5 p.m. after declaring that the gathering was an unlawful assembly. In total, 76 were arrested, according to Louisville Metro Police Department spokesman Lamont Washington.

Here’s the scene on Market. Police continue to arrest dozens of protesters for unlawful assembly. pic.twitter.com/cNdq9kquzw

The group arrived around 4 p.m., and in less than a half-hour, protesters put up long tables with meal settings, connect four games, a trampoline, artwork and shade tents between Clay and Shelby streets.

By 4:30 p.m., protesters had blocked off Market with metal barricades. Organizers chanted “Whose streets? Our streets.” At one point, a police officer threatened to arrest people still in the street after barricades were removed.

A minute later, another protester announces over a megaphone that they are “here for a reason” and aren’t going anywhere.

A long table and tents are being set up on Market as Sam Cook’s “A Change Is Gonna Come” plays. Protesters have blocked off one block. pic.twitter.com/2mpuUcSyDl

They also erected a list of demands for business owners, including hiring a more proportionate number of Black workers.

The protest comes a day ahead of the expected arrival of opposing militias, including to demand justice for Breonna Taylor, a 26-year-old Black woman who was fatally shot by police.

The march began at the Big Four Bridge parking lot in Louisville, and had been advertised as a March for Freedom.

Shortly before 5 p.m., police in riot gear had moved into the block, creating a tense standoff between protesters and law enforcement officers who were within 20 feet of one another.

Around 5:30 p.m., police began taking away some of the tables and chairs from the area as protesters remained.

As of 6 p.m., roughly an hour after unlawful assembly was declared, police continued to surround and to arrest the remaining protesters who stayed in the area.

“Why are you in riot gear? We don’t see no riot here,” protesters chanted.

Arrests of protesters continued throughout the 6 o’clock hour, with protesters sitting down in the middle of the street.

For the 76 arrested, the charges included obstructing a highway and disorderly conduct, according to Washington. Several protesters were also charged with assault for throwing bottles at officers, Washington said.

Protesters have been marching in Louisville for 58 days to demand that the three officers involved in the shooting of Taylor — Sgt. Jonathan Mattingly and officers Brett Hankison and Myles Cosgrove — be fired by Louisville Mayor Greg Fischer and criminally charged by Kentucky Attorney General Daniel Cameron.

Hankison was fired last month by Louisville interim police chief Robert Schroeder and is in the process of appealing the termination.

Last week, 87 protesters were arrested after marching to Cameron’s home in Louisville’s East End. Though they were originally charged with the felony of intimidating a participant in the legal process, Jefferson County Attorney Mike O’Connell said on July 17 he is dismissing that charge for each protester.

The scene on Market. pic.twitter.com/TQgcMvr5G9