Low Energy, High Profits: How Privatizing Public Utilities Left Us All In The Dark

Above Photo: Demonstrators march through the main streets of San Salvador carrying a giant homemade bottle of water, protesting against the government’s privatization plans for the water service, Thursday, March 22, 2007. (AP/Luis Romero)

More than a generation after President Ronald Reagan barked at his subordinates, “Don’t just stand there; undo something!” government officials from South Africa to southern California have embarked upon an unprecedented dismantling of the public sector.

PHILADELPHIA — The Maryland rapper Sean Born’s 2012 album Behind the Scale includes what one reviewer described as the “candidly soulful single” “Lights On,” which has the driving and catchy up-tempo beat that tends to characterize much of contemporary hip-hop. Its lyrics, however, have none of the swagger that the genre is known for and is, in fact, so achingly honest that it seems an apologia of sorts to explain the emcee’s drug-dealing past.

I ain’t trying to be a kingpin

I’m just trying to put some money away

Got to, Man, it only makes sense

I’m just trying to keep my lights on, lights on

I’m just trying to keep my lights on, lights on

I’m just trying to keep my lights on, lights on”

More than a generation after President Ronald Reagan barked at his subordinates, “Don’t just stand there; undo something!” government officials from South Africa to southern California have embarked upon an unprecedented dismantling of the public sector, hiring for-profit enterprises to manage everything from homeless shelters, to toll roads, parking meters, and utilities. While there are no known comprehensive studies, the best available evidence strongly suggests that consumers worldwide have never spent so much of their paycheck to park downtown, or for a liter of water, or a kilowatt of electricity.

No demographic has been squeezed more than communities of color, which have borne the brunt of Wall Street’s restructuring of the economy, and its 40-year effort to hollow out the manufacturing industries that Blacks and Latinos have heavily relied on for jobs that pay a decent wage. 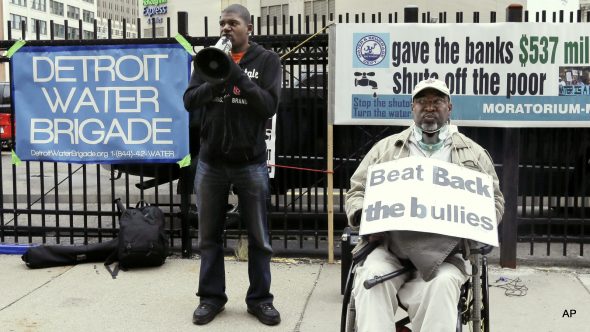 Demeeko Williams, left, of the Detroit Water Brigade talks into a megaphone during a rally against water shutpffs outside federal courthouse in Detroit, Monday, Sept. 22, 2014.

“I really like Sean Born,” Chris Waters, a 33-year-old African American social worker who lives in Philadelphia told MintPress, “because he’s talking about hustling — not to buy big cars or fancy jewelry – but just to meet life’s basic necessities, like paying the electric bill. That’s real to a lot of people these days.”

With spring approaching, Waters said, he sees many families scrambling to borrow or raise enough money to pay overdue gas or electric bills before Philadelphia Gas Works is legally permitted to shut off the heat. A popular scam in the city is doctoring paychecks to qualify for discounts on electricity and gas, and Waters says he has an unmarried friend who greets visitors wearing a bathrobe over his daytime clothes.

“He doesn’t want to get set back with a $300 or $400 gas bill [by turning up the heat], Waters said. “That’s the equivalent of a (monthly) car note just to heat your apartment.”

A classic idea that hardly ever works out

The classically liberal macroeconomic idea that undergirds privatization is that the business sector has more incentive to innovate, improve service delivery, and reduce costs over time. The reality has been quite the opposite. By at least one estimate, water supply systems in the U.S. require a $1 trillion investment over the next 20 years to get up to speed. In the decade following the 1989 privatization of England and Wales’ water system, consumers saw their rates increase by 46 percent when adjusted for inflation, and shutoffs for delinquent payments tripled.In perhaps the most infamous case, Bolivia sold its state water system to a consortium of British investors in 1999 for only $20,000. Within a year, the buyers had tripled the price of water in Latin America’s poorest country, with a population of nearly 11 million people, mostly indigenous. And to reinforce its monopoly, corporate executives wrote a codicil into their contract with the state that legally prohibited Bolivians from collecting rainwater for personal use. Massive street protests in 2001 led the government to cancel the contract.

In 1999, privatization efforts led to the worst cholera outbreak in South Africa’s history. In preparations to sell its water infrastructure to a private vendor, government officials in the Kwa Zulu Natal region on the country’s eastern edge installed taps to underserved, rural areas but increased the price dramatically. When customers couldn’t afford to pay, the municipalities shut off their water, forcing thousands to drink from the same river that was used as a toilet by their neighbors. Local hospitals reported nearly 115,000 cases of cholera at the height of the health crisis. 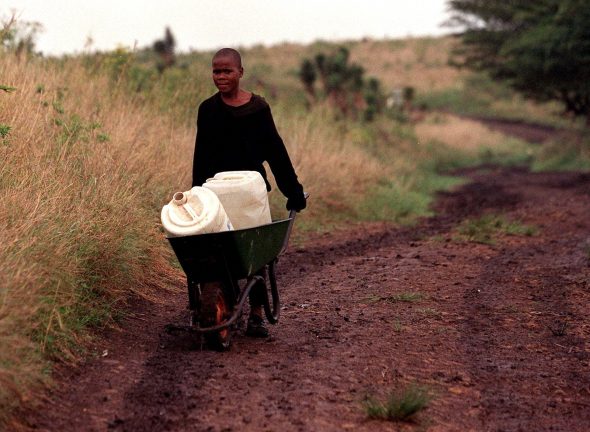 Phakamani Mpanza,14, delivers water to his home from a roadside borehole about 3 kilometres (1.8 miles) away near Empangeni (about 160 kilometres (99 miles) north of Durban, Oct. 27 2000. (AP/Cobus Bodenstein)

A  2014 study commissioned by an Australian trade union found that privatization of electricity infrastructure in the 1990s resulted in dramatic price increases. Then, just last month, the CEO for Dayton Power and Light announced a plan to cut 160 jobs in Ohio and Indiana, and market analysts predict that the company might soon request a rate increase from the state regulator to recoup revenues lost as a result of more efficient household appliances.

“A new refrigerator only uses 10 percent of what it did 20 years ago,” David Rinebolt, a public-interest attorney told MintPress, adding:

Electricity usage nationwide is going down, but these companies promise their shareholders an annual return of somewhere between 9 and 11 percent. So what do you do? You go to the regulator and you say, ‘I’ve got these pipes and these wires in the ground and I have to cover my fixed costs no matter what you use.’”

Worsening matters for consumers is that, while increasing technological efficiency does drive usage down, utilities are typically monopolistic enterprises selling a basic necessity to a captive market, William Lazonick, an economics professor at the University of Massachusetts at Lowell, told MintPress. That’s important, he said, because it indicates that, in economic terms, utilities are highly inelastic — meaning that a rate increase doesn’t significantly lessen the demand for the product.

Typically, Rinebolt said, corporations will agree to maintain employment at a steady level for a few years after buying a public utility, but then workforce layoffs are fair game. With the cost of acquiring electricity and gas fairly static, and labor costs at a minimum, the biggest barrier standing between shareholders and optimal profits is the state regulator, which must approve rate hikes. And that, Rinebolt said, is usually an easy lift:

There is something in the industry called ‘regulatory capture,’ which states that monopolies often take over their regulators. These companies are so politically powerful that they usually get their way or something very, very close to it. There’s really not much risk for [private utilities]. Their returns are pretty much guaranteed.”

Similar to his predecessor in the White House, President Donald Trump has proposed selling off federally financed New Deal-era energy projects — including the Tennessee Valley Authority and Bonneville Power Administration in the Pacific Northwest, each of which provides some of the cheapest and most reliable electricity in the U.S. Lobbyists have descended on Capitol Hill in the scramble for power, literally.