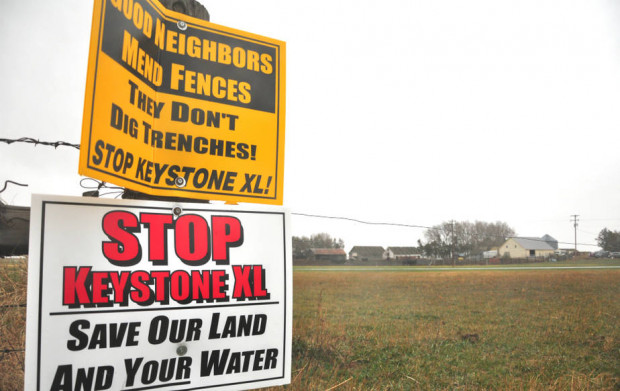 Above Photo: Nebraska landowners have been pushing back against TransCanada’s construction plan and any use of eminent domain to secure land for the route. Credit: Guillaume Meyer/AFP/Getty Images

Nebraska regulators also have yet to approve the pipeline. Opponents plan to testify at a hearing Aug. 7, but they won’t be allowed to discuss safety concerns.

This story has been updated with a judge’s order curtailing pipeline opponents’ testimony at the Public Service Commission hearing.

It will be close to three years, at least, before oil could possibly be moving through the controversial Keystone XL pipeline—if the pipeline is completed at all. Company officials now concede that after battling protests and regulatory hurdles for nearly a decade, market forces could scuttle the project.

Canadian pipeline giant TransCanada first proposed the 1,700-mile project in 2008 to ship tar sands oil from Alberta to the Gulf Coast. The half-built project was halted by President Obama in 2015 only to be revived through an executive order signed by President Trump soon after he took office. The company has spent $3 billion on the project, mostly for pipe but also for land rights and other costs of lobbying for its proposal.

During the prolonged dispute, the price of oil fell from more than $130 a barrel to roughly $45 a barrel today, undercutting the prospects for production growth in the Canadian tar sands, which were used to justify the Keystone XL project at its outset.

Along with changing market conditions, the emergence of competing pipelines scattered TransCanada’s customer base. Now it’s uncertain whether the company can sign enough new commitments from Alberta’s beleaguered oil patch to move forward.

The company recently embarked on an “open season” for Keystone XL, inviting commitments from companies to ship tar sands crude (or, alternatively, lighter oil from the U.S. Bakken fields, in North Dakota and Montana).

At the same time, regulators in Nebraska are weighing the concerns of landowners, environmental organizations and indigenous groups who oppose the pipeline. The state’s Public Service Commission will hold a week-long hearing starting Aug. 7 on whether or not to approve the pipeline’s proposed route through Nebraska.

How much opponents will be allowed to tell the commission, however, was signficantly limited this week by a retired juge who is overseeing that hearing.

In answering objections from TransCanada about testimony planned during the hearing, the retired judge wrote that testimony could not discuss safety issues, such as risks from potential oil leaks, or discuss whether there is any actual need for the pipeline. For those rulings, she cited limitations of the state’s Major Oil Pipeline Siting Act, passed in 2011. She also prohibited testimony, at TransCanada’s request, about how landowners have been treated by the pipeline company in recent months. Landowners will still be allowed to raise concerns about damage to their land during construction and discuss the value of the land, despite TransCanada’s objections.

The commission is expected to announce its decision by Nov. 28. If the proposal is denied, the company could appeal the ruling or submit a new proposal with a modified route.

Company officials say they will wait for both developments before deciding whether to move forward with the pipeline project.

“We’ll make an assessment of the commercial support and the regulatory approvals at that time,” TransCanada Executive Vice President Paul Miller said during the company’s second-quarter earnings call with financial analysts on July 28. “In the event that we do decide to proceed with the project, we still need probably six months to nine months to start doing some of the staging of the construction crews, et cetera, and that would be followed by about a two-year construction period.”

The combined staging and construction time means that it would be close to three years before the project could possibly be completed. Miller’s statements suggest far more uncertainty than when President Trump came into office and decreed that the pipeline could be built.

Reassessing Need for the Pipeline

“We’re not surprised that TransCanada is having these issues, and we think they are a legitimate threat to the project ever being built,” said Josh Axelrod, a policy analyst with Natural Resources Defense Council.

“TransCanada maintains shipper support for the project and remains committed to Keystone XL,” said Jacquelynn Benson, a spokeswoman for the company. “We are confident that we will have the support we need to move this project forward as we seek additional shipper commitments through the open season.”

Miller, the executive vice president, said the company would only be seeking commitments from third parties to ship oil through the pipeline—not trying to fill it up with oil to be sold by TransCanada’s own marketing arm. “Our business model has us going out to the marketplace producers, refiners to assess their market needs,” he said in answer to a question from a financial analyst.

The low price of oil, however, has stymied the development of additional tar sands oil production.

The only tar sands projects currently under construction were approved and started before the 2014 oil price crash, according to a recent analysis by environmental advocacy groups Oil Change International and Bold Alliance. Financing for future projects is expected to drop to zero by 2020 due to low oil prices, the report predicted.

In the past year, some of the world’s biggest oil companies have retreated from Alberta’s tar sands, selling off $24 billion in development rights in one five-month period.

As Keystone XL stalled, two other pipeline projects advanced. An expansion of an existing Enbridge pipeline that runs from Alberta to Wisconsin will likely be completed by 2019. Kinder Morgan’s expansion of the Trans Mountain Pipeline from Alberta to British Columbia is slated for completion in late 2019. These developments leave Keystone XL in third place in a race to add pipeline capacity where none may be needed.

“There is a strong suggestion that we are reaching peak production, and they haven’t even run out of capacity yet on pipelines that exist,” Axelrod said.

In Nebraska, pipeline opponents have been gearing up to fight the pipeline.

For Brian Jorde, an attorney who has represented Nebraska landowners opposed to the project for the past seven years, next week’s hearing is the latest turn in a drawn-out legal battle that could continue for years.

“This PSC proceeding is about the fifth inning in this saga, because there will be multiple appeals that will last for 18 to 24 months, potentially more,” he said.

“I find it unlikely that this pipeline will ever be built,” he said, “regardless of what happens at the PSC.”