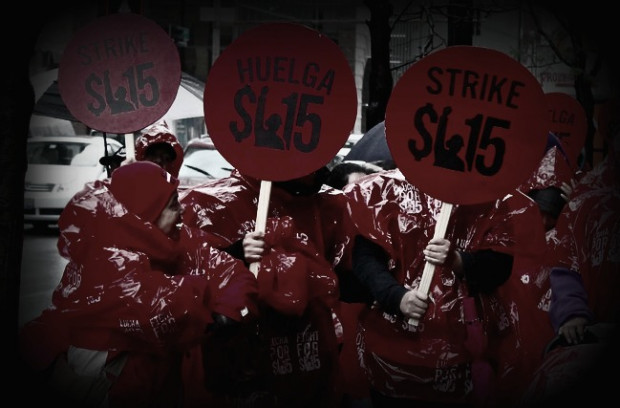 Low-wage workers across the country walked off the job on Tuesday to agitate for an increase in the federal minimum wage, in what were the first major labor actions launched since the election of Donald Trump.

Organized by the “Fight for 15” campaign, McDonalds employees in more than 300 cities rallied for better pay. They were joined by other fast-food workers, home health care workers, and Uber drivers. In addition, baggage handlers and cabin cleaners at nearly 20 airports nationwide, including Chicago’s O’Hare, participated in the day of action.

There were reports of several arrests in lower Manhattan during the protests.

The current federal minimum wage stands at $7.25 per hour—well below what’s considered a “living wage” in most states.

Tuesday’s protests received support from Rep. Keith Ellison (D-Minn.), who’s vying for a powerful role in the Democratic Party as Chairman of the Democratic National Committee.

“Politics might be the art of the possible, but organizing is the art of making more possible,” he said of the day of action.

The movement for a $15 per hour baseline was championed during the Democratic Primary by Sen. Bernie Sanders (I-Vt.). His rival who went on to win the nomination, former Secretary of State Hillary Clinton, promoted a smaller minimum wage increase to $12 per hour.

President-elect Trump, who cast himself as a champion of the working class during the campaign (despite himself being a lavish billionaire from a wealthy family), has rejected calls for an increase in the minimum wage. During a GOP debate last November, Trump claimed that “wages are too high” currently.

“I hate to say it, but we have to leave it the way it is,” Trump said of the minimum wage at the time, claiming that any pay increases would hurt US businesses trying to compete abroad.

Trump has since moderated his position, saying he would leave it up to states to increase wages. But one of the people reported to be on his short list for Labor Secretary would be an unabashed opponent of the Fight for 15 movement.

Fast-food chain CEO Andy Puzder, owner of Hardee’s and Carl’s Jr., met with Trump last week and is vying for a role in his administration. As the American Prospect notes, Puzder has “championed every aspect of right-wing trickle-down economics,” including preventing minimum wage increases.

Congress has not hiked the minimum wage since 2009. According to a study by the Center for Economic and Policy Research, if pay kept up with increased worker productivity over the last few decades, then the current minimum wage should be more than $21 an hour.