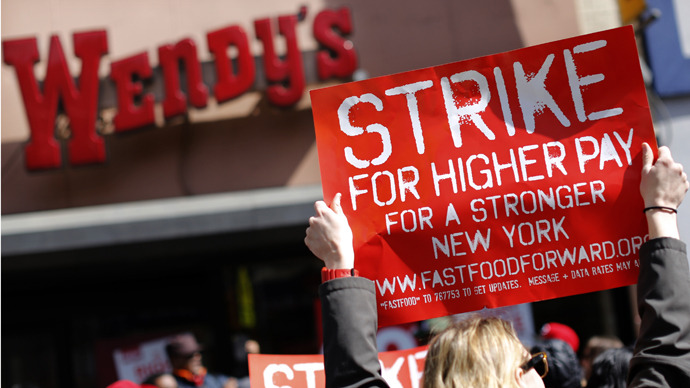 The Wages of Dignity

A month after moving to the U.S. from Bangladesh in 2008, Shaheen found a job at a Dunkin Donuts in Sunset Park. Now 23, she is a full-time student at Kingsborough Community College and continues to work for the company.

“At first, my English was not so good, so I just wanted to keep the job and not get fired,” she says. But as her ability to communicate improved, so did her understanding of the fast food industry. She soon realized that the paltry wages, lack of sick or vacation time, and long hours on her feet catering to demanding and often rude customers were more rule than exception.

“Oh my God, this one man threw his iced coffee at me,” she continues, shaking her head in disbelief. “He wanted sugar and I forgot to put it in. I apologized and poured one packet in to correct my error. He said it was still not sweet enough and tossed it on me. Other people don’t want to wait even two minutes and complain and complain.”

Such common gripes about low wages and difficult-to-deplorable working conditions have sparked a nationwide movement by fast food employees. In New York City, the campaign, called Fast Food Forward (FFF), is being spearheaded by New York Communities for Change (NYCC), the Black Institute, and other groups that formerly worked with ACORN. The campaign’s slogan, “We Can’t Survive on $7.25,” refers to the wage that is typically paid to workers at Burger King, Domino’s, KFC, McDonald’s, Taco Bell, Wendy’s, and a host of other eat-and-run establishments.

Shaheen, for example, has received only one wage increase in five years, moving from $7.25 to $7.75 an hour. Meanwhile, George, 22, has worked full-time at a Burger King on Fifth Avenue in Bay Ridge for three years. “I still make $7.25,” he scowls. “I ask for more money every day I work. This morning the boss told me that I’ll get a raise when I die. It makes me feel low not to be able to support myself and move out of mommy and daddy’s house. I’m already old and I’ve gotta stay with them because I can’t afford to get a place of my own.”

Beyond just better wages, the workers at the forefront of the FFF campaign are demanding to be treated with greater respect and dignity.

FastFoodForward, has a Tumblr page FastFoodCrimeWave, adds a litany of other work-related complaints to those voiced by George and Shaheen. Some examples: “I don’t get overtime”; “I don’t get paid for time spent counting the register”; “I have to pay if the register is short”; “I have to buy my own uniform.” And these are not isolated grumblings. According to an investigation promoted by FFF and released in April 2013, 84 percent of New York City fast food workers in the five boroughs have experienced wage theft, an intentional violation of state labor laws so egregious that Attorney General Eric Schneiderman is presently looking into the matter. His corroboration could have major implications for more than 50,000 New York City fast food workers—and produce a ripple effect for the approximately three million laborers who toil in the industry throughout the 50 states.

Jonathan Westin, executive director of New York Communities for Change, understands that the campaign is fighting a mighty adversary with incredibly deep pockets. How deep, you ask? BusinessInsider.com reported in July 2012 that the top 15 chains in the U.S. raked in a combined $115 billion in nationwidewide sales in 2011.

Small wonder that organizing of fast food workers has spread from New York City—where the campaign first took off in the fall of 2012—to cities including Detroit, Chicago, Milwaukee, and St. Louis.

“When fast food workers saw Wal-Mart workers challenging the policies of the largest retailer in the world last October, they were inspired to do the same thing for themselves,” Westin says. “One of our main demands has been for $15 an hour. Once we win that, the workers will want to protect what they’ve won by joining a union. But this is not a typical union organizing drive. Our goal for now is simply to create momentum for wage increases.”

He describes the campaign as a massive, community-based effort not only to improve working conditions for fast food workers, but also to address the exponential growth of poverty-wage jobs. What’s more, he adds that FFF’s outreach has extended to everyone from religious leaders to community activists, consumers, and local legislators. “Thirty City Council members supported the workers who walked out on the day of the second one-day strike, April 4,” he says. “They also accompanied the workers who went on strike back to their jobs the next day to make sure they weren’t fired.”

Kira Shepherd, Director of Campaigns and Organizing at the Black Institute, run by ACORN CEO and Chief Organizer Bertha Lewis, has recruited more than 40 clergy to stand with workers during protests. In addition, Shepherd says that they have “adopted different stores in their communities and, along with their congregants, have met with management to demand an atmosphere where staff are treated well and given decent pay so that they can take care of themselves and their dependents.” Since many imams, pastors, and rabbis serve high-poverty neighborhoods, Shepherd says that the connection between poor health, overcrowded and substandard housing, educational neglect, and low wages has made the need to organize a no-brainer.

Highlighting these connections, Westin continues, is a key step in mobilizing for progress. “To change things in our communities, we need to look at the institutions that employ people. Fast food workers tell us that they’ve been in their jobs for five or 10 years and are still making minimum wage. They’re trying to support their families by working at the only jobs they can find. Since 2009 we’ve been organizing low-wage workers and have won some important victories in the supermarket and car wash industries that we think can extend to fast food.”

That said, Westin concedes that despite aggressive organizing, fast food corporations have refused to budge and have instead pushed back. “In every one of the 100 franchises we’re in throughout the five boroughs, the corporate office has brought in folks to talk to the workers about the negatives of organizing,” he continues. “They’ve told them, ‘You can’t do this; you can’t do that.’ It hasn’t worked. With every action we’ve taken, the workers have gotten bolder, and our second strike in April doubled the number of participants of the first strike in November 2012. Corporate’s actions have antagonized the employees to do more.”

Management has also put the issue of pay rates and benefits squarely on the shoulders of individual franchise owners—as if they are to blame for worker disquiet. “We’ve sat down with a few different franchise owners to advocate on behalf of employees,” Westin adds. “The common refrain is that there is nothing they can do because they’re struggling to get by and feel squeezed. They tell us that their profit margin is small because everything they do is controlled from the top, from how much sauce to put on a Big Mac to what toilet paper to buy. They say that the corporation has all the power.”

FFF organizer Naquasia, who is 22 years old and a two-year employee of KFC,doesn’t buy it. Despite cobbling together full-time hours by working two part-timeKFC jobs, she still relies on food stamps, something she doubts any franchise owner has ever had to do. “I worry about my health,” she says. “Most of my co-workers can’t afford nutritious, home-cooked food. All we can afford is the dollar menu at McDonald’s. We get one KFC meal during our shift and each day we tell one another that we have to stop eating it, but we can’t. I know I’m blessed to have a job, but the managers act like they’re doing good by us and they’re not. I’ve worked off the clock and have worked more than 40 hours without overtime. I’ve had to put five dollars back into the register when I’ve come up short. That’s my MetroCard money, so it hurts.”

Naquasia’s fury is contagious; so is her fire. The FFF campaign is about power, she says. “I go out once or twice a week, as a volunteer, and talk to other workers about the campaign. It’s a worker-to-worker thing. When people hear our passion they get on board. We show them that we’re willing to stand up for our rights and have each other’s backs. They see that joining FFF is the right thing to do. Day-by-day, more people are opening their eyes to the injustice of their jobs.”

That injustice has prompted George to attend several FFF meetings. While Shaheen’s school schedule has made attendance impossible, she is quick to note that her lack of participation does not reflect a lack of interest. In fact, both workers agree that earning $15 an hour would be life-changing. While they feel that winning such a large increase is unlikely, they also know that power rarely surrenders of its own accord. Not surprisingly, they are considering joining the next, as-yet-unscheduled, FFF action.