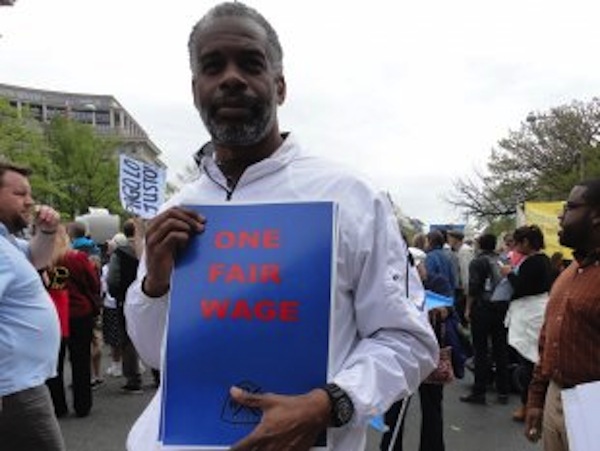 Hundreds of low-income workers from around the country demanding better wages, benefits and an end to corporate greed blocked traffic in Washington on Monday morning to start of a day of protests, marches and lobbying Congress for economic justice.

The protesters marched along main thoroughfare Pennsylvania Avenue as they headed towards the Capitol, blocking traffic for several minutes at a time at busy locations along the Mall. The activists were in Washington, D.C., for the Rising Voices for A New Economy conference, organized by National People’s Action and the National Domestic Workers Alliance. Their coalition included groups like Restaurant Opportunities Centers United (ROC United), which is using the day to launch a new shaming campaign against the corporate restaurant industry and its national lobbying group, The National Restaurant Association. NRA members are also in Washington for their annual convention and congressional lobbying day.

“It’s a shame that people get paid $2.13 an hour—that’s 213 pennies more than a slave was making an hour, and I come from a slave state,” said Darrin Browder, a New Orleans ROC organizer who held a sign saying “One Fair Wage,” to protest the 22-year-old federal minimum wage for tipped workers. “We’re the wealthiest country in the world. The problem is the whole economy itself. Poor people fuel the economy because wealthy people don’t spend anything.”

Browder said he came to Washington “because this is where change happens. We can’t do this anywhere else. We tried raising the minimum wage in Louisiana and it didn’t even leave [the legislative] committee… We want the federal government telling our state how it’s done.”

Dozens of small restaurants in Louisiana—not the corporate-run chains represented by the NRA—have raised the tip minimum to $5 an hour, he said, proving that it can be done and still be prosperous to business owners.

Carlos Romero, a 22-year-old ROC organizer who joined the group after he was unfairly fired from his job in Chicago, said that it was time to unmask who’s behind the NRA. “The NRA has this whole façade of representing mom and pop diners, but it’s big corporations that are behind them,” he said. “They’re part of a big machine, and we need to build awareness about that.”

“We’ve had a low minimum wage of $2.13 an hour for the past 22 years,” said Woong Chang, 32, a DC-based bartender and a ROC member since 2009. “Restaurant workers have no stability. [Restaurant owners] rely each day on customers subsidizing employees. This creates huge instability for the workers. Some months you can get by just fine, but some months you can’t even pay the rent. Most restaurant workers are poverty workers.”

The march stopped in front of the Capital Grille, which is owned by the world’s largest full-service restaurant corporation, Darden, which ROC has targeted for its unfair wage and benefits. Terry O’Neill, president of the National Organization of Women, briefly spoke, saying the industry discriminated against its largely women workforce.

“Women are standing in solidarity with our sisters and brothers calling for one fair wage,” O’Neill said to cheers. “Restaurant workers today are disproportionately women. The NRA… is anti-women and we are going to help take them down if they do not change their ways.”

She then started chanting with the crowd joining, “Hey, hey NRA, how many kids did you starve today?” before the march continued to the Capitol.

“We’re fighting against $100 million lobbying operation that’s representing big corporations,” Chang said. “The fact that they have kept the [tipped] minimum wage at $2.13 an hour for 22 years is absurd. It makes you question the democratic system and the halls of Congress—that one industry could have that much power.”

On Monday, ROC United released a new report, entitled, “The Other NRA: Unmasking The Agenda of the National Restaurant Association.” ROC United profiled how the NRA spends millions annually on lobbying and political spending to defend an industry making $600 billion in revenues.

“The NRA could choose to pursue a policy agenda of improving restaurant industry standards that reflect the vested interest of small and medium-sized business owners in ensuring the health and well-being of their communities,” the report said. “Unfortunately, at the moment the NRA has chosen to pursue a different agenda — one that has eroded public health, employment, and other legal protections for both restaurant workers and consumers. Nutritional menu labeling; regulation of sodium, trans fats, and sugars; minimum wage increases; and paid sick days are just a few of the policy proposals that the NRA has fiercely opposed.”

On wages and benefits, ROC noted that the NRA has consistently lobbied to protect its low-wage, low-or-no benefits business model by: opposing increases to the minimum wage and pay equity, including the tip wage; restricting worker’s health care coverage; and combating paid sick day legislation.

While restaurant industry CEOs make multi-million dollar salaries and tax-free stock packages, the base pay for tens of thousands of servers across the industry is the federal tipped minimum wage of $2.13 an hour. As a result, thousands of its workers rely on welfare, with “over $7 billion in public assistance benefits going to over half of the nation’s fast food workforce,” ROC said. That total includes $1.2 billion going to McDonalds’s and $650 million to Yum! Brands.

The NRA and its top members have pursued these and other pro-industry policies by making campaign contributions and lobbying. The NRA itself has given $12.6 million to federal campaigns since 1989. Members have given far more. In that same period, Disney gave $14.1 million; Coca-Cola gave $10.5 million; Marriot gave $7 million; McDonald’s gave $5.8 million; Darden gave $5.6 million; Wendy’s gave $2.3 million. When added up, the NRA and it biggest members gave $63.8 million, according to an analysis of federal election reports.

The partisan breakdown of its political giving is what you would expect, with the NRA donating more than 80 percent of its funds to Republicans. Its member corporations have been more bipartisan, giving 55 percent to the GOP. Meanwhile, since President Obama took office, it’s more than doubled its registered lobbyists, from 15 in 2008 to 37 in 2013. The biggest restaurant corporations have another 127 federal lobbyists, ROC reported, including many former senior congressional staffers.