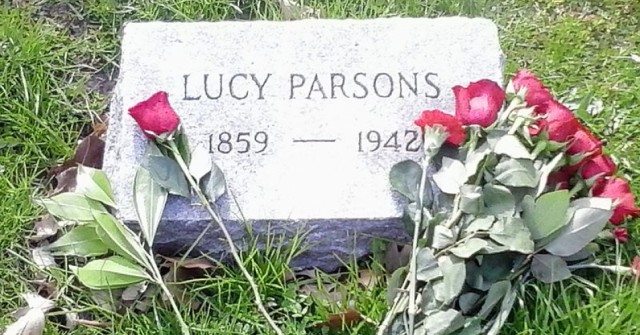 Anarchist And Intersectional Feminist Who Inspired May Day

Workers shouldn’t strike and go out and starve, but strike and remain in, and take possession, said Lucy parsons. Lifelong partner of Albert parsons, one of the American Labor Leaders, most associated with the founding of the American May Day tradition.

Lucy Parsons was of Mexican American, African American, and Native American Descent. She was born into slavery and she was an intersectional thinker and activist a century before the term was coined.

Her work after emancipation led her directly into conflict with the Ku Klux Clan and into a lifelong partnership with radical typographer and organizer Albert Parsons.

Lucy never ceased advocating for racial, gender, and labor justice, all at once, and she’s part of the movement that won us the 8-hour day.

Parsons’ husband, Albert, was one of the orators in Chicago, who attracted thousands to a rally near Haymarket Square in 1886, on behalf of worker rights. After police charged the crowd, and a stick of dynamite was thrown, he was one of those arrested and later hanged.

Lucy, it was, who led the campaign to exonerate the Haymarket martyrs, and then she carried on their work. Leading poor women into rich neighborhoods to confront the rich on their doorsteps. Challenging politicians at public meetings and marching on picket lines.

She was the only woman of color, and one of only two women delegates—the other being Mother Jones—among the 200 men at the founding convention of the IWW, the Militant Industrial Workers of the World. There, she was the only woman to give a speech. She called women the “slaves of slaves” and urged the IWW to fight for equality and charge underpaid women a lower rate for union fees.

She also called for the use of nonviolence and “occupation” of the means of production. You can see her principles in the sit-down strikes of the 1930s in Detroit, the Civil Rights Movement of the 50s and 60s, and the Occupy movement of today.

She died in 42 in a house fire at the age of 89, but in the celebration of May Day, her work endures. Long may her intersectional spirit live.

Best-selling author and broadcaster Laura Flanders hosts the The Laura Flanders Show, where she interviews forward thinking people about the key questions of our time.  The LF Show airs weekly on KCET/LinkTV, FreeSpeech TV, and in English & Spanish in teleSUR. Flanders is also a contributing writer to The Nation and Yes! Magazine (“Commonomics”) and a regular guest on MSNBC. She is the author of six books, including The New York Times best-seller, BUSHWOMEN: Tales of a Cynical Species (Verso, 2004) and Blue GRIT: True Democrats Take Back Politics from the Politicians (Penguin Press, 2007). The Laura Flanders Show first aired on Air America Radio 2004-2008. You can find all her archives and more at Lauraflanders.com or via Twitter @GRITlaura