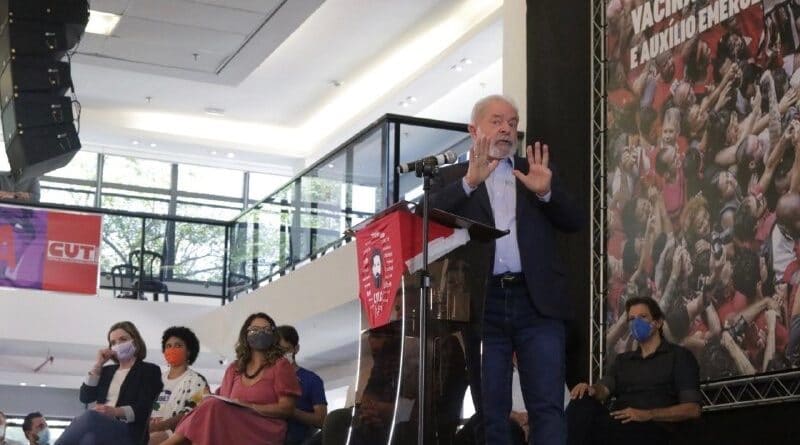 Lula After The Annulment Of Convictions

Above photo: Lula gave a press conference at the headquarters of the ABC Metalworkers’ Union in São Bernardo do Campo, SP.  Vanessa Nicolav/Brasil de Fato.

In a press conference held at the headquarters of the Metalworkers Union, the former president criticized Bolsonaro, “Brazil does not belong to him or the militia members”

“The word ‘give up’ does not exist in my dictionary. I learned from my mother: ‘always struggle,’” affirmed former Brazilian president Luiz Inácio Lula da Silva on Wednesday March 10, in the main office of the ABC Metalworkers’ Union in São Bernardo do Campo in the metropolitan region of São Paulo. His address occurred after the annulment of the sentences against him emitted during the Operation Car Wash case, by the 13th Federal Court of Curitiba, in the state of Paraná. The decision, made on Monday March 8, was published by Minister Edson Fachin of the Supreme Federal Court (STF).

People voiced their support for the ex-president on social media and by shouting greetings to Lula from their windows in cities like São Paulo.

With the annulment of the convictions, Lula recovers his political rights and is eligible to be candidate for public office in the upcoming presidential elections that are expected to take place in the second half of 2022.

However, Lula did not confirm that he will be the presidential candidate in his speech. “Now the PT [the Workers’ Party of Brazil] must send its leaders across the country to discuss with the people about the economy, vaccines, emergency aid, the employment question. Right now I don’t even have time to think about 2022 candidacy,” he said.

Lula affimed that he was “victim of a great lie committed in the legal system,” that took him out of the presidential race in 2018 and kept him in prison for 580 days. The former president also reminded people of Marisa Letícia, his former partner, who died on February 3, 2017. “She died due to pressure, the stroke came early. I was prohibited even from visiting my brother when he was in a coffin. So if there is a Brazilian that has reason to have many, deep grudges, it’s me. But I do not. I sincerely do not. Because the suffering faced by the Brazilian people right now, what the poor people are going through in this country, is infinitely worse than any crime that they committed against me.”

About Operation Car Wash, in which condemned Lula for alleged crimes of corruption, Lula criticized the judge overseeing the ruling at the time, Sérgio Moro, who later became the Minister of Justice of Jair Bolsonaro.

“We are going to continue fighting so that Moro is considered as a suspect. He does not have the right to become the biggest liar in the history of Brazil and then become a hero. I am certain that today, he is probably suffering even more than what I suffered,” pointed out the ex-president, that accused the media of having “signed an agreement” with Operation Car Wash.

Criticism of the Bolsonaro government

The government of President Jair Bolsonaro was criticized by Lula. “I need to speak with you about the situation in this country. It would be an error on my part to not mention that Brazil did not have to go through this.” “Many people are suffering. This is why I want to express my solidarity with the victims of coronavirus and the healthcare workers. And above all, the heroes of the SUS (national Brazilian healthcare system), that were even politically discredited. If it wasn’t for the SUS, we would have lost many more people to coronavirus.”

The ex-president called on Brazilians to take the vaccine against COVID-19, “Do not follow any imbecile decision of the president of the Republic or the health minister. Get vaccinated.”

In one part of Lula’s address he extended thanks for the support that he received during the time period when he was put on trial and detained in the federal police station in Curitiba, Paraná. “Prison was not the suffering that I thought it would be. I do not know of anyone else in history that had so much support. I have to thank the trade union movement and the landless workers’ movement,” the ex-president highlighted, remembering the Free Lula vigil outside the police station that was maintained for the 580 days of his time in prison.

Argentina had special attention of Lula. “I cannot forget to thank President Alberto Fernández, who had the decency, against the extreme right, and the courage to go to the Federal Police station in Curitiba to visit me. I even told him to not give an interview so he would not suffer. He told me: ‘Lula I do not have a problem with what the right-wing will say, I came here to be in solidarity with you because you are suffering the worst political injustice that has happened in Latin America.”

Lula also spoke of another Argentine. “I also extend thanks to our dear Pope Francisco. He sent someone to see me in Curitiba with a letter that the Federal Police did not allow to enter, I only later received the letter from the Pope. In addition, the Pope made statements on several occasions.”

Other political leaders were also mentioned such as the former president of Uruguay Pepe Mujica, the US senator Bernie Sanders and the mayor of Paris, Ana Hidalgo.

While responding to questions, he also thanked the Cuban president, Miguel Díaz-Canel, and the Venezuelan president, Nicolás Maduro, for their solidarity. He also criticized the United States for interfering with the sovereignty of these countries: “I think that the Americans should not get involved in Venezuela, Haiti, the Dominican Republic, in Brazil, in Cuba. The Americans should just deal with their country and leave each one to take care [of their own country]. The issues of democracy in Venezuela pertain to the Venezuelan people.”