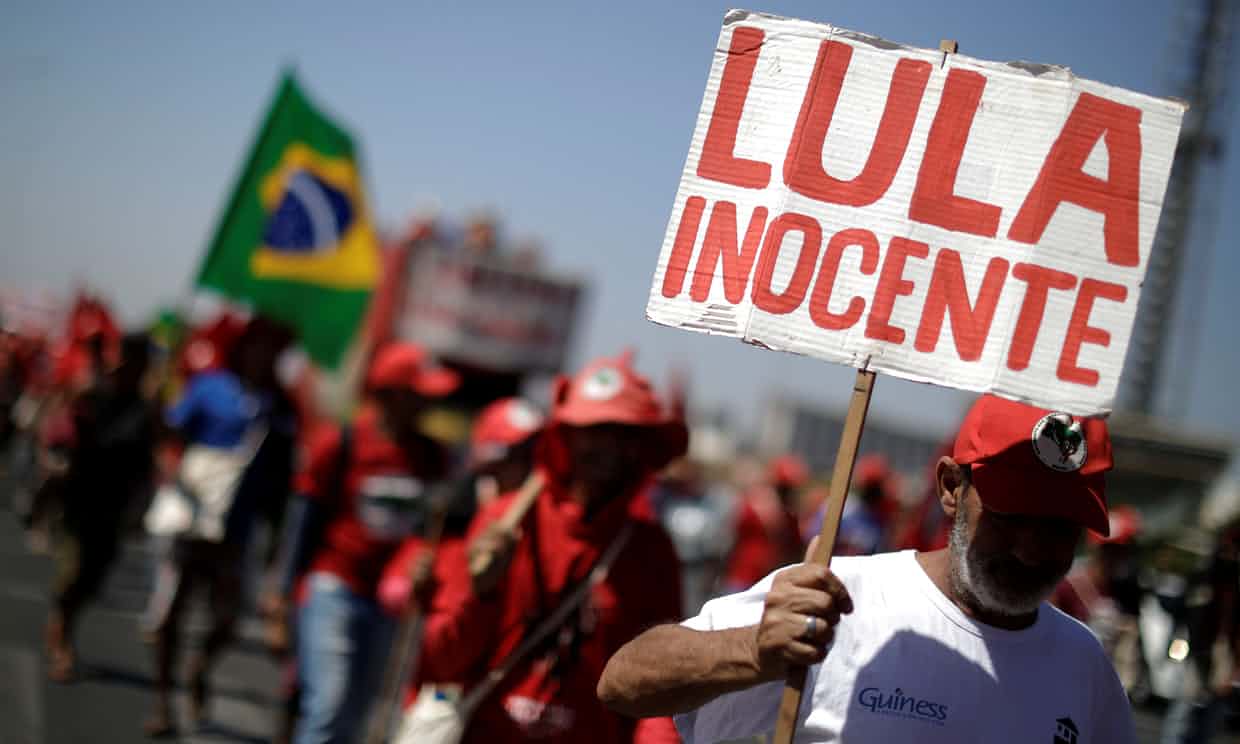 Former Brazilian president Luiz Inácio Lula da Silva has refused any relaxation in the nature of his imprisonment until his innocence is recognized. He declared this in a handwritten letter in response to a petition by Operation Car Wash prosecutors to ease the conditions of his incarceration from enclosed to semi-free. The letter was given by Lula to his lawyers on September 30.

According to Lula, the only thing acceptable is that he is declared innocent. He is not interested in anything else.

Reiterating what he has been saying since he was sentenced, in a clearly manipulated process, Lula wrote to the Brazilian people that he is not going to swap his dignity for his freedom.

“All the Car Wash Prosecutors should really do is to apologize to the Brazilian people, to the millions of unemployed people, and my family, for the harm they have done to democracy, to justice, and the country,” he said, vindicating as well that “faced with the arbitrary acts committed by the Prosecutors and by Sergio Moro, it is up to the Supreme Court now to make amendments so that there be independent and impartial justice.”

As Lula anticipated without waiting for the decision of the judge in charge of his case, Carolina Lebbos, the effort made by attorneys headed by Deltan Dallagnol comes to nothing. Their idea was to change Lula’s prison condition before the Supreme Court takes another, let’s say more radical decision, like his unconditional release.

While Lula pre empted the maneuver, at the same time he paved the way for a legal debate with scarce precedents: Can a prisoner refuse to accept changes to his imprisonment under Brazilian law?

There are different opinions about whether this is a determination or a legal concession. There are just a few cases in which prisoners refused to an improvement in their prison conditions. When this has happened before it was usually argued that if they left jail they would fear for their lives.

Lawyers have said that a prisoner can refuse to accept certain conditions imposed by the judge in charge, such as obliging him to wear an ankle bracelet, for instance.

Lula’s decision puts pressure on all those involved; if he is obliged to use the ankle bracelet, judge Carolina Lebbos may grant him the possibility to refuse it. This would justify his permanence in prison and, at the same time, he would grant himself a space to continue demanding that the process which sentenced him to prison in the first place be annulled.

But if there is not any imposition and he is forced to go to a semi-open condition, or in an extreme case to house arrest, Lula would say he was forced to accept it out of respect to law. Meanwhile, he would continue demanding justice and seeking to prove his innocence.

At the same time, Lula has put new pressure on the Supreme Court of Justice, whose omission made him an accomplice of all the irregularities committed by then Judge Sergio Moro and attorneys under his direction.

Lula’s defense is declaring suspicion to the procedure held against him, especially the behavior of Sergio Moro and Deltan Dallagnol. They also applied for a habeas corpus favorable to Lula, declaring Moro’s partiality, demanding to annul the process and Lula’s immediate release.

Combining all these actions, we can see that Lula’s move is not so risky since he doesn’t have much to lose.

On the contrary, this has been a masterstroke. By refusing a benefit while insisting that he would not accept anything other than being declared innocent, he is strengthening his usual discourse. If the benefit is imposed on him, he would say that he respects the law, contrary to his persecutors.

In this way Lula would increase, by a lot, the pressure on the members of the so far very silent Brazilian Supreme Court.

Now, let’s see how the members of the highest office of the Brazilian justice behave —with or without dignity.