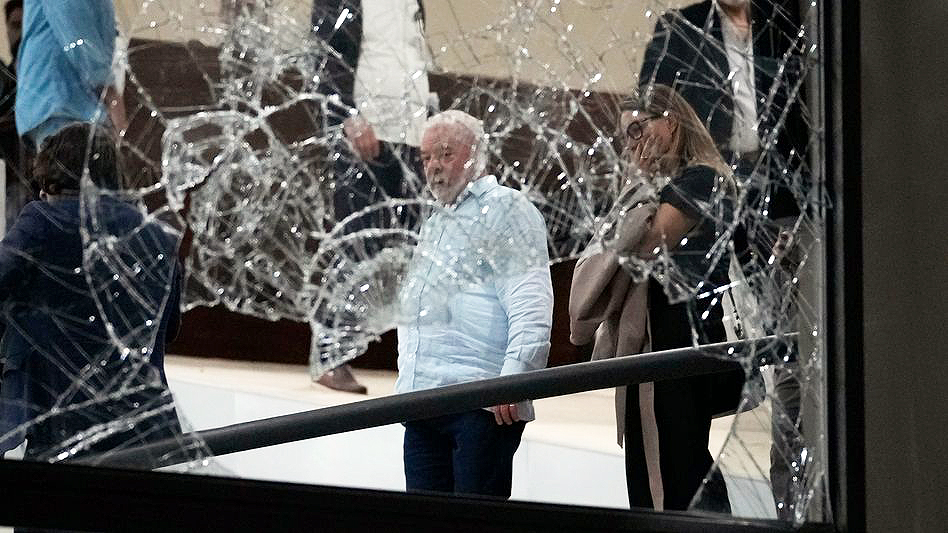 Lula: The Coup And The Importance Of Popular Mobilization

Above Photo: Lula inspects the damage to the Panalto. Eraldo Perez / dpa.

The attempted fascist Bolsonarist coup d’état of January 8 in Brasilia is not a merely local event. Everything indicates that it had international sponsorship. It is far from being a spontaneous revolt, as there are countless facts that demonstrate a high degree of organization, coordination and financing prior to the assault and vandalizing of the main institutions representing the three branches of state power in Brazil, no less than the Congress, the Planalto Palace and the headquarters of the Federal Supreme Court. This relationship with the support of an international organization behind the coup attempt and other serious subversive attempts occurring in our region has been pointed out by several analysts but I have not read any as precise as that of the Cuban Hedelberto López Blanch (https://bit.ly/3Zrc9Rw).

He reminds us of the Conservative Political Action Conference (CPAC) held in Mexico last November 18 and 19, “the largest ultra-right-wing organization in the world, created and controlled for half a century by the American Conservative Union, which holds one or two meetings a year and where more than 100 organizations contribute with abundant capital”.  The author cites the presence at the meeting of Eduardo Bolsonaro, son of Jair, who in one of his speeches stated: “we must gather energies to launch the struggle for freedom in Brazil, Mexico and the Latin American region”, all in the midst of warnings against the advance of socialism, as they call the slightest attempt to reverse neoliberal policies.

As for the planning and financing of the assault on the highest institutions of the Brazilian Republic, the evidence in the digital networks themselves is overwhelming, in which the call to Brasilia was reported in advance “with breakfast, lunch and dinner paid for” and of course, the mobilization of 100 buses for the transfer of people. Numerous publications in those media mentioned the three official buildings subsequently invaded and even said that they would camp at the Planalto. What is astonishing is that nobody informed President Lula of these preparations. Not even the national intelligence. It seems natural that at least some of his collaborators must have known about the announcements and perhaps underestimated them. It also seems a very big oversight of those in charge of security and defense in Lula’s cabinet to have left the bolsonaristas, head of the government of Brasília and head of the city security, in their posts. By percent, the latter apparently saw in Miami the scenes on TV of the assault to the government buildings sitting next to the ex-president. This explains the weak police response the mob encountered and the inaction if not complicity of the military police under the government of Brasilia. A very suspicious fact is the non-action of the battalion always on guard in the basement of the Planalto Palace. This battalion depends on the high command of the armed forces. The inaction of the generals in the face of the Bolsonarista camps located in front of the army barracks, especially in front of the headquarters of the armed forces, provoked Lula’s scathing comment on the passivity of the generals and that they “seemed to like” the calls to overthrow him made by the mobs gathered there.

The role of digital networks in the bolsonarista and ultra-right rebellion on a global scale deserves a separate chapter and two splendid articles by Ignacio Ramonet (https://bit.ly/3iqpAAJ) and Eduardo Febbro (https://bit.ly/3kbpYmO) have been published on the subject and the threat posed by these networks, in the hands of private mega-monopolies, to what is left of democracy in the world.

Lula has acted vigorously in the defense and protection of institutionality. He emerges strengthened from this setback. According to Datafolhs, 93 percent of Brazilians oppose the coup attempt.  Bolsonaro’s prestige is going through some low times. But Bolsonarismo is alive and already planning a new mobilization in Brasilia this week, which made the government reinforce security measures.  The bet of the ultra-right (and its new ally) the right in our region is on chaos and ungovernability. The main resource of progressive governments is mass support as demonstrated in Mexico where Lopez Obrador keeps it at bay with his enormous popular acceptance. This is what the tireless and experienced Lula will have to resort to with his charisma to consolidate his government and advance in his promising program of national salvation.