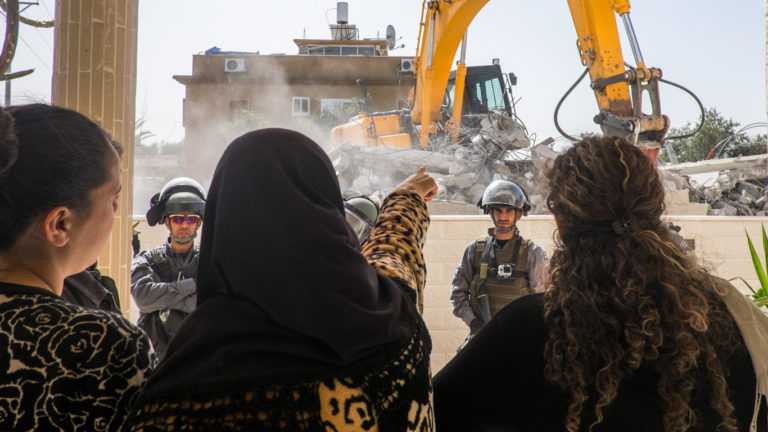 Above Photo: Israeli police officers stand guard as the home of Hana al-Nakib and her four children is being demolished, in the city of Lyd. Yotam Ronen. Activestills.

Palestine Stretches From The River Jordan To The Mediterranean And Goes Right Through The Ancient Palestinian City Of Lyd.

Lyd, Palestine — One of the toughest challenges facing those who fight for justice in Palestine is breaking the Zionist paradigm, which limits the name Palestine to the West Bank and the Gaza Strip. These two delineations of territory have no historical meaning and no geographical significance. They are no different from other parts of Palestine except that they were drawn by Zionists who, after the murderous 1948 campaign of ethnic cleansing, decided that they would not include those two areas within the boundaries of the Zionist state.

In 1967 the State of Israel occupied these two areas, and today the West Bank exists only in people’s imagination, while the Gaza Strip operates as a prison. After the disastrous Oslo process began in 1993, and the Palestinian Authority came into being, these two areas became known to the world as the State of Palestine.

Lyd As It Was

In July 2021, I visited the city of Lyd, where I met with Councilwoman Fida Shehada, a Palestinian member of the Lyd City Council who was kind enough to spend a day with me in her city. She gave me a tour of the town before we sat down for a lengthy and detailed interview, which will soon be posted to my Patreon page.

“Lyd has archeological sites that show it is as old as the city of Jericho,” Shehada told me. However, the state and the municipality refrain from excavating because these sites have no value to the Zionist narrative. Lyd is perhaps most famous for being home to the Church of Saint George. The church was built over the grave of the famous Saint George of Lyd, who was buried in the city of his Palestinian mother’s birth after he was martyred in the early fourth century.

The world-renowned hip hop band “Dam” is also from the city of Lyd. According to their website, “Struck by the uncanny resemblance of the reality of the streets in a Tupac video to the streets in their own neighborhood in Lyd, Tamer Nafar, Suhell Nafar and Mahmood Jrere were inspired to tell their stories through hip hop.”

It is becoming clear today that the city of Lyd may well have been the site of the worst massacres by Zionist militia in 1948. In a move more cynical than can be imagined, the municipality of Lyd was renamed Lod in Hebrew, and a plaza was built to commemorate the Palmach right in front of the Dahmash Mosque. The Palmach was the largest of the Zionist militias and was responsible for committing massacres in the city.

The mosque itself was the site of a horrifying bloodbath when citizens from the city, who were fleeing the shooting, crowded into it seeking shelter from the violence. But a Zionist militia headed by Moshe Dayan and Yitzhak Rabin took no pity on those seeking refuge and massacred everyone in the mosque. More than 150 men, women and children were gunned down.

Those who were not gunned down at the mosque or on the streets were forced to leave the city, and an estimated 40,000 men, women and children were made to take part in what became known as “The Death March.”

In her book “Palestinian Women, Narrative Histories and Gendered Memory,” published in 2011 by Zed Books, Dr. Fatma Kassem recorded the testimonies of Palestinian women from Lyd who survived the massacres and the forced expulsion.

Some of the women whom Dr. Kassem interviewed had witnessed the massacre at the mosque. One recalled:

The first days when the Jews came in, people went inside the mosques, they thought that the Jews would not kill them in the mosques. But they killed everyone who was inside.”

My father and many others went inside the mosque to protect themselves. He was not fighting. He was an old man. My father and my cousin pushed them into the mosque and [the militia] shot all of them.”

In 2017, the Knesset passed legislation cracking down on “illegal” construction. The provisions of the new law were based on a report written by Deputy Attorney General for Civil Law Erez Kaminitz. According to Fida Shehada, this law has resulted in over 40,000 demolition orders for Palestinian homes in the north and central parts of the country alone — this does not include the Naqab, Jerusalem or the West Bank. The Kaminitz Law is one of many racist laws designed to keep Palestinian citizens of Israel from building homes.

“I remember one day I saw seven homes being demolished all at the same time, at the same minute,” Shehada told me. “I wanted to understand why this was happening and how to prevent this from happening in the future.”

“We have 30% Palestinian population, but 40% of the school children,” Shehada said, and smiled as she saw the puzzled look on my face. Officially, on record, the Palestinians make up 30%. Still — because of another racist law, called the Citizenship Law, which limits the rights of Palestinians to wed other Palestinians — some are Palestinian women who are married to Palestinian men are deprived of citizenship.

Their children are citizens but cannot attend public schools, “while their mothers are not allowed to study or work or leave their homes.” So, if the father dies, the mother has to leave, and if she takes the children with her back to the West Bank or Gaza, they will lose their status — which, with all its difficulties, is still better than that of the Palestinians in the West Bank and Gaza.

In an effort to instill the love of settlement activity in the hearts of Israeli Jews, religious Zionist settlers have made Lyd their home. They have their own municipal budgets and luxury apartments built for them exclusively, even as Palestinians struggle to find housing in the city. During the uprising of May 2021, over 500 armed settlers from the racist, violent Regavim movement moved into the city’s municipality. They aimed to incite violence and terrorize the Palestinian population.

When Councilwoman Shehada questioned the mayor about this, he threatened to report her to the Shabak. The Shabak is the Israeli secret police, known for targeting, detaining and torturing Palestinian political activists. She had to remind him that the Shabak does not work for the mayor’s office.

The most surprising thing I saw or heard during my visit to Lyd was a comment by Councilwoman Shehada: “I am very optimistic,” she said with a grin. “Things are changing, we have seen more Palestinians resist and organize, and I believe that we are facing a new reality today.”

If there is room for optimism, Shehada certainly has a big role in it. “I decided to run for mayor in the upcoming elections,” she told me. Local elections are scheduled to be held in the fall of 2021. Even if the world hasn’t come to terms with reality, Palestine stretches from the River Jordan to the Mediterranean and goes right through the ancient Palestinian city of Lyd.