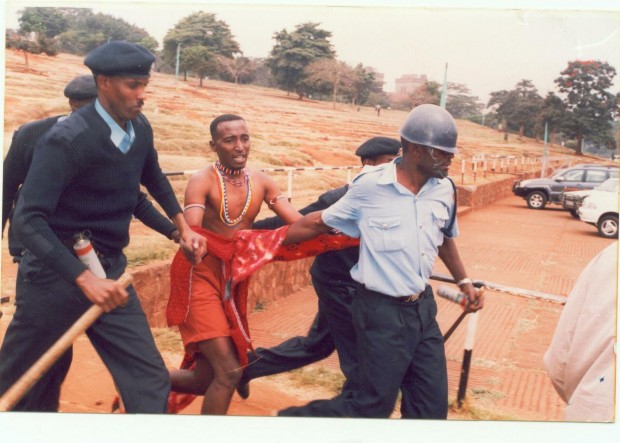 – CLICK HERE TO STOP LAND GRABS BY JOINING OUR LAND, OUR BUSINESS CAMPAIGN –

Reminiscent of what happened to the Maasai community in Narasha in 2013, Maasai pastoralists in Kedong, Akira and Suswa are glaring at massive evictions arising from a group of concessions awarded to several companies including Hyundai, Toshiba, Sinopec and African Geothermal International (AGIL) for the purposes of developing geothermal projects on the Maasai lands.

According to the local communities–who claim ancestry to the land and have filed cases in Kenyan courts– African Geothermal International (AGIL) and Marine Power along with Akira I and Akira II1 have disregarded court injunctions instituted by the Maasai, proceeding to deploy their heavy machinery to their proposed project sites without due diligence or consultations with the local communities. The concession areas, which cover hundreds of thousands of acres, are home to thousands of Maasai pastoralists.

The communities feel that their rights have been grossly violated because each of the companies have failed to adhere to Bio-cultural Community Protocols2 that require all external actors to respect Indigenous Peoples’ customary laws, values and decision making processes; particularly those concerning stewardship of their territories and lands.

The companies have also disregarded a current dispute between Kedong Ranch Ltd and the Maasai community3 along with key provisions from the constitution of Kenya (2010). Article 40 of the constitution provides for the protection of the right to property (of any kind) without discrimination and just, prompt and full compensation where acquisition is of national interest. The right to a clean and healthy environment is equally guaranteed under Article 42 in addition to the right to a cultural heritage4.

While the Maasai are not against infrastructure development for the country, they are equally distressed over the companies’ similar dismissal of the principle of Free, Prior and Informed Consent (FPIC) as enshrined in the United Nations Declaration on the Rights of Indigenous Peoples (UNDRIP)5,6. By forcefully evicting the Maasai from their land while denying them the opportunity to participate in and benefit from the development projects, the companies are also in contravention of the Nagoya Protocol on Access and Benefit Sharing7.

– CLICK HERE TO STOP LAND GRABS BY JOINING OUR LAND, OUR BUSINESS CAMPAIGN –

On top of these concerns, the Maasai decry the use of armed police to enforce the evictions, the destruction of their property, and the outright dispossession of their grazing land which is the only source of their livelihoods..

The Maasai demand the following:

References
1 Kenneth, B & Greg U. (2011). Geothermal Resource Assessment for Mt. Longonot, Central Rift Valley: Proceedings of Kenya Geothermal Conference 2011.
2 UNEP
3 High Court of Kenya – Nakuru, ‘Civil Suit No.21 of 2010′
4 GoK (2010). The Constitution of Kenya. Government Press, Nairobi.
5 UN (2007)
6 See official records of the General Assembly, Sixty First Session, Supplement NO. 53/( A/61/53), Part one Ch.II Sec.A
7 UN (2011). The Nagoya protocol on access to genetic resources and the fair and equitable sharing of benefits arising from their utilization to the convention on biological diversity: Convention on Biological Diversity