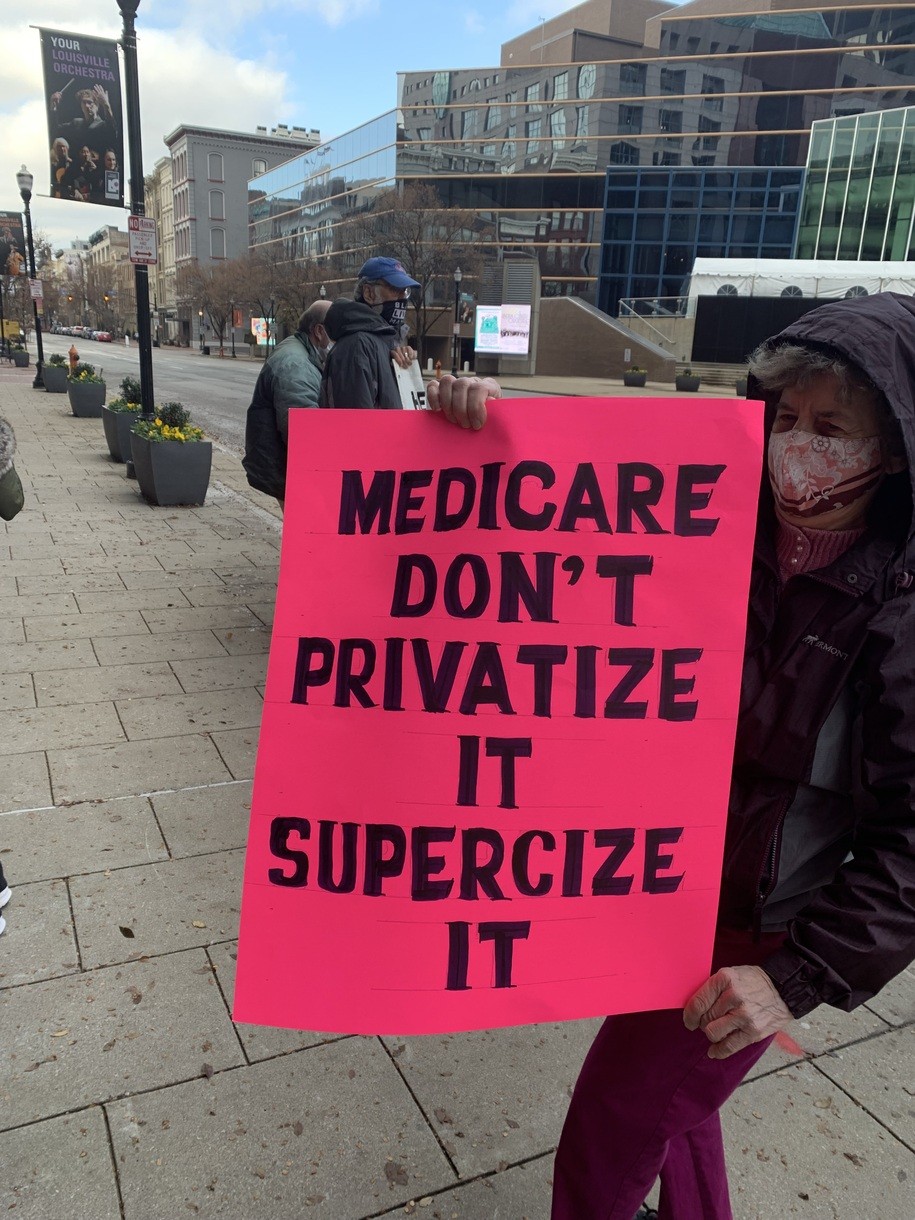 Above Photo: Louisville demonstration at Humana, which owns a Direct Contracting Entity.

On June 13th the International Association of Machinists IAM 751 Retirement Club voted overwhelmingly to end the privatization of Medicare and to send their resolution to their congressional delegation, to President Biden, and to Secretary Xavier Becerra at Health and Human Services.

Machinists’ District 751 represents 27,000 members who work at Boeing and some smaller shops across the state of Washington.  It is one of the largest organizations within the IAM.

The privatization scheme the 751 Retirement Club opposes is ACO REACH, formerly called direct contracting entities (DCE).  It is a pilot program in which seniors who chose traditional Medicare are placed, without their consent, into plans that are run by insurance companies, private equity, and venture capitalists who can take as high as 40% in overhead and profit from the Medicare program.

These plans can be implemented across all of Medicare without a vote from Congress.  Officials in charge of the program have said they intend to have all the traditional Medicare beneficiaries in such for-profit programs by 2030.

Tom Lux, who lives just north of Seattle and is Treasurer of the 751 Retirement Club, brought the resolution before the Club at its regular business meeting.  Lux worked at the Everett Plant of Boeing and then on the staff of the union’s training and safety program

Lux explained that he first spoke with the retiree legislative representative who was fully supportive of the resolution against ACO REACH and agreed to present it, but he was unable to attend the meeting so Lux made the presentation.

“I talked about the Medicare direct contracting pilot program that Trump initiated where equity firms and insurance companies could come in and basically buy up clinics and medical facilities and move people over to that private system without having to really notify them or explain to Medicare recipients that they were now in a different system,” Lux told the members.

“I mentioned that there is about $1.6 trillion in the Medicare Trust Fund that these private equity firms and insurance companies are just waiting to get at—to make a profit—and I emphasized that the idea was that they wanted to make a profit off of health care even though people who are in traditional Medicare are there because they don’t want the profit motive in their health system.”

The Biden administration has announced that the direct contracting entities pilot will be replaced at the end of the year by ACO REACH, a new name for a program that has essentially the same characteristics of bringing private equity and profits between seniors and their physicians.

“I feel that the Biden administration is getting bad advice,” Lux told the members.  “They basically just tweaked some of the direct contracting language and now call it ACO REACH.  I explained that was an acronym and that pilot will begin in January 2023, if we don’t stop it.  I mentioned that public health advocates across the country see almost no difference between ACO REACH and Trump’s direct contracting that’s basically privatizing the last public health system that we have.”

Following discussion and some questions which Lux answered, the vote was overwhelmingly in favor of the resolution.

Lux was aware of the issue because he is also a member of the Puget Sound Advocates for Retirement Action (PSARA) which has spearheaded an educational program around ACO REACH.  Lux is urging other retiree organizations and unions to pass a resolution and take action to get their congressional delegation to join in opposition to ACO REACH.

“We have to educate our members on what is going on, and we have to let the administration know that we do not want any type of privatization of traditional Medicare, in fact we should be looking to improve it.  When they say this is an improvement, we do not agree with that assessment at all,” he concluded.

(Please sign the petition to President Biden asking for an end to ACO REACH, and forward any resolutions passed to nursenpo@aol.com so that your action can inspire others.)

Whereas, since 1965 Medicare has been our national health care system for seniors and the disabled in the United States; and

Whereas, traditional Medicare holds sacred the relationship between Medicare beneficiaries and their chosen health care provider; and

Whereas, traditional Medicare, is a public good, and should not be privatized; and

Whereas, the Trump administration opened the door to the complete privatization of Medicare through a Direct Contracting pilot program allowing private equity firms, insurance companies, and corporate health businesses to directly contract to provide Medicare services; and

Whereas, the prospect of Wall Street getting a piece of what is projected to be $ 1.6 trillion of annual Medicare spending by 2028 has led to a rush to buy-up Accountable Care Organizations for managing Medicare services; and

Whereas, the Biden administration ended the Direct Contracting pilot and rebranded it as the ACO REACH (Accountable Care Organization Realizing Equity, Access, and Community Health) pilot to begin in January of 2023; and

Whereas, public health advocates across the country see little difference between ACO REACH and the Direct Contracting pilot, since both pilot programs allow third party private entities to wedge themselves between patients and their healthcare providers and to draw down the Medicare Trust Fund by making huge profits in several ways, including weakening services for Medicare beneficiaries; now therefore be it

Resolved, that the 751 Retirement Club goes on record against the privatization of our Medicare system, and for terminating the ACO REACH pilot program, and closing the door on third party entities in our Medicare system; and be it further

Resolved, that the 751 Retirement Club send a copy of this Resolution to our two US Senators and Congressional House members in their jurisdiction, as well as to President Biden and to the Secretary of Health and Human Services Xavier Becerra.