With their lives in limbo and with congressional inaction, undocumented youth take part in civil disobedience to call on community to take fight to their districts and to Capitol Hill.

New York, NY –  Immigrant youth from across the country converged in New York City on Thanksgiving Day to participate in a civil disobedience action and pledge their commitment to winning permanent protection for Young Undocumented Immigrants in the Country. Four DACA recipients and allies were removed from the parade, blocking traffic by the Macy’s Day Parade.

On September 5th, Deferred Action for Childhood Arrivals (DACA) was repealed by President Donald Trump in one of the cruelest attacks on the immigrant community. Starting on March, 5th 2018, 800,000 undocumented youth will begin to lose protection from deportation and their right to work. After years of commitment and sacrifice to gain their education, support and start their families, and become key contributors to their communities politicians are standing by while they will broken apart from their families, livelihood, and community.

“The White House & establishment politicians are responsible for this decision. They are negotiating away the power and dignity of our immigrant community. The community is being pitted against each other — children against parents” said Catalina Santiago, one of the Undocumented Youth who was arrested at the Macy’s Day Parade. “Their aim is to make undocumented youth bargaining chips for driving our parents and our community deeper into the shadows” 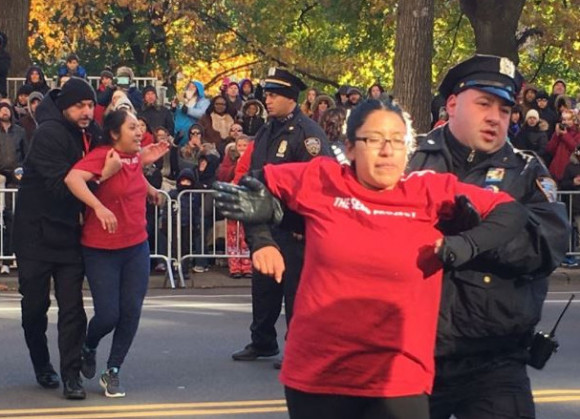 “Undocumented youth are refusing to put our destiny in the hands of establishment politicians. We are choosing to fight for the dignity of our entire immigrant community, and that begins with us. We are your classmates, your coworkers, and your neighbors” said Hector-Jario Martinez, one of the Undocumented Youth who was arrested at the Macy’s Day Parade. “We are not just the future of this country, but we are also the present workers that it depends on. We are millions of young undocumented students and workers who are the backbones of our schools, industries, and communities. We are calling on our community members to stand up and fight for our right to work and live in this country.”