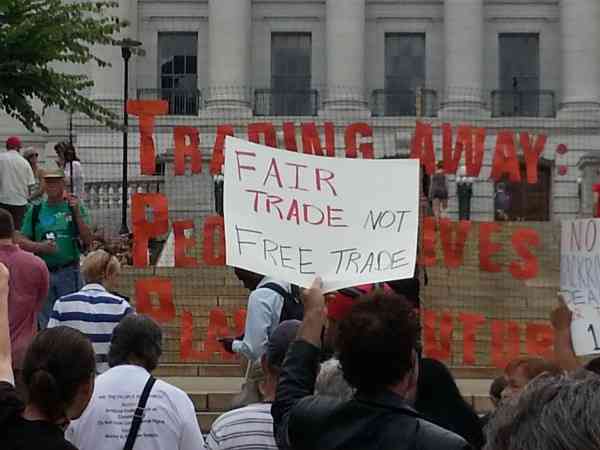 The Trans Pacific Partnership Free Trade Agreement has been in the process of negotiation since 2008 (in secret).  Countries involved are the United States, Australia, Brunei Darussalam, Canada, Chile, Malaysia, Mexico, New Zealand, Peru, Singapore and Vietnam.

If approved by Congress, it would be the largest so-called “free trade” agreement ever, comprising 40% of world trade.

Since NAFTA, international trade agreements have been less about tariffs, customs duties and import taxes than about deregulating transnational corporations.

The Trans Pacific Partnership (TPP) takes this a big step forward.  The implementation legislation will include not only the text of the trade treaty—but also any changes to federal statutes that might be in conflict with the TPP as agreed upon.

Changes to current federal law could affect environmental standards, food safety and labeling requirements for imported food, longer patents on drugs (driving up prices), worker protections and the weakening of U.S. banking regulations.  According to leaked documents, it would also outlaw “Buy American”—or “Buy Madison”—laws and ordinances.  Thus our elected representatives at all levels of government would be prohibited to legislate certain improvements in our laws and ordinances that would improve our quality of life and standard of living.

Other provisions of the Trans Pacific Partnership would give foreign corporations rights to sue governments if they passed laws or regulations that reduced that corporation’s “expected” profits.  These suits would be heard not in American courts but in special tribunals of the World Bank, putting foreign corporations above the reach of American law.

Finally, under “Fast Track” procedures for passage of the TPP, Congress would have only 90 days to consider a huge piece of legislation, only 20 hours of debate would be permitted—and no amendments would be permitted.  Hardly “democratic” consideration of far-reaching legislation that will affect us all!

Members of the Common Council recognized these provisions as potentially major hindrances to their responsibility to protect Madison residents and pass ordinances in the public interest.

It was for this reason that they unanimously passed a strong Resolution in opposition to the Trans Pacific Partnership and “Fast Track” and urged our federal representatives to oppose them vigorously in Congress.  We should all thank them for their vigilance and their attempt to protect democratic values,” said David Newby, President of the Wisconsin Fair Trade Coalition.

(The Dane County Board of Supervisors passed a similar Resolution at their meeting on October 17.  These two bodies are the first in the country to take action, but many other local government organizations are expected to follow soon.)

The Wisconsin Fair Trade Coalition includes environmental, union and family farm organizations dedicated to changing our international trade agreements so that they improve the standard of living and quality of life of all those who live on our planet.