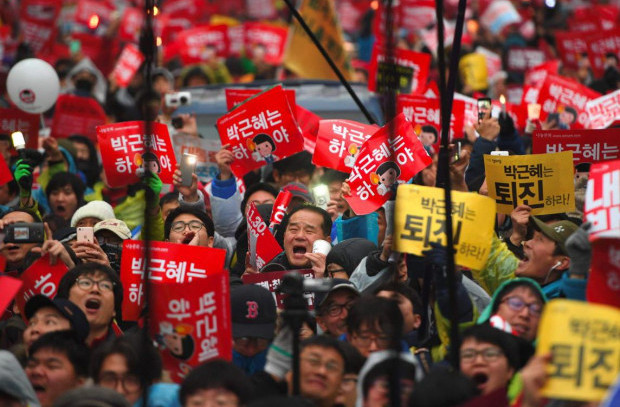 Above Photo: Protesters shout slogans as they march toward the presidential Blue House to press their demand for the resignation of South Korea’s President Park Geun-Hye in central Seoul AFP

The remark came four days after the parliament approved Park’s impeachment, signaling major changes to her key policies opposed by the opposition bloc. Her fate hinges on a Constitutional Court decision due in six months.

South Korea has been seeking to deploy the Terminal High Altitude Area Defense (THAAD) system in the country to improve its defense capabilities against Pyongyang’s provocations. The opposition parties here, however, have been protesting against the move, adding it may make China uncomfortable.

The government originally planned to complete the deployment by May.

“The schedule must be reviewed. An administration impeached by the people can not push forward the project,” the main opposition Democratic Party said through a statement, adding the issue should be concluded by the next administration.

The party said the deployment could lead to a decrease in Chinese tourists, adding South Korea should be careful as the United States is also expected to have an icy relationship with Beijing with its new administration led by President-elect Donald Trump.

The splinter People’s Party echoed the view, adding Park’s controversial policies must be scrapped and be re-discussed by the new administration.

While South Korea originally planned to hold the presidential election in December next year, the race is expected to be held earlier in 2017 after the impeachment of Park.

Once Park is completely removed from office, South Korea has 60 days to elect a new leader.