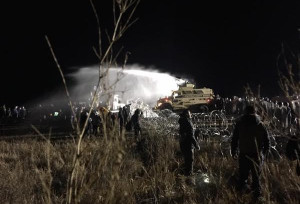 Above Photo: Twitter/Clayton Thomas Mueller. Water protectors stand off against militarized police who doused them in water cannons in 20-degree temperatures.

Outside a triage tent at the foot of the Oceti Sakowin Camp, frantic chatter and whirring generators fused with the familiar drone of police surveilling in the night sky.

“We have seen four gunshot wounds, three of them to the face and head,” said Leland Brenholt, a volunteer medic.

By gunshots, he insinuated that rubber bullets had been used on hundreds of people clashing with police. Conflict erupted again over the Dakota Access pipeline near the Standing Rock Sioux reservation, Sunday night.

“This is still not on mainstream media,” Brenholt sighed. “I’d like to know why,” he sang in a facetious sing-song voice.

The video account of Brentholt was one of dozens posted on Facebook. They helped to piece together the night’s events, an evolving scene repeatedly described as a war zone by many testifying via livestream.

Tensions flared when police say around 400 protesters, or ‘water protectors,’ attempted to dismantle a police-enforced barricade on State Highway 1806. Around 6 p.m., demonstrators say they used a semi-truck to remove burnt military vehicles that had been chained to concrete barriers. Since October 27th, traffic has been blocked at the center of the Backwater Bridge, a crossing not far from the encampments where thousands of pipeline resisters have occupied since April.

Their action was met with the same militarized response that the Morton County Sheriff’s Department has demonstrated on protesters for weeks: the use of armored trucks, less-than-lethal ammunition, tear-gas, mace, and on this below-freezing night, water cannons.

“We have fire trucks on the scene,” e-mailedMorton County Public Information Officer Donnell Hushka. “They are using their fire hoses to put out fires, wet the land around so fires don’t spread and they are also using water as crowd control.”

Images issued by Morton County showed a bright ball of flames, but from where and how the fire was ignited, remains unclear. By 8:30p.m., officials said protesters attempted to start several fires in the area.

Meanwhile, pictures and videos circulating among water protectors showed an armored truck, not fire trucks, dispersing a powerful stream of water into the crowd.

Movement organizers posted information about relief efforts. A nearby school in Cannonball had opened their gym to help people doused with water as well as those suffering from other injuries. Reports from a coalition of advocacy groups near Standing Rock report hundreds of water protectors were receiving treatment for contamination by tear gas, hypothermia, and blunt traumas as a result of rubber bullets.  One person, an elder, was reportedly revived after suffering cardiac arrest, organizers said.

“As medical professionals, we are concerned for the real risk of loss of life due to severe hypothermia under these conditions,” read a statement from the Standing Rock Medic and Healer Council.

Yet, more than six hours into the standoff, legacy media was seemingly transfixed on one of two topics, neither of them the pipeline battle. The obvious distraction: the Donald Trump news-cycle. The other: celebrities.

CBS News, the national outlet that had been present for the October 27th raid of the “1851 Treaty Camp,” posted a photo of Christie Brinkley, and on its Twitter feed, Bruno Mars.

The New York Times,on Facebook, focused on the eating disorder of actress Zoe Kazanbut also on this non-confrontational headline: “How Should I Rewatch ‘Gilmore Girls’?”

On their website, though, it was an exhausting smattering of articles falling under the paper’s newly branded beat, The 45th President. In the aftermath of the presidential election, the battle at Standing Rock’s now largely been blacked out by a news cycle dominated by a perplexing President-elect. In recent weeks there’s been an uptick in coverage over the pipeline, but at times, cycled in a seemly pattern of media convenience. That Trump is a known investor in Dakota Access helps keep the battle at Standing Rock relevant.

But perhaps no news is good news, maybe?

The Associated Press, in its early-morning report, deduced the Sunday evening standoff in North Dakota as ‘skirmishes’ — a story quickly picked up by the Washington Post, ABC News, and several other news outlets across America. Meantime, by 1 a.m. eastern, CNN had published its piecepainting the protesters as “very aggressive,” a description long-pedaled by the Morton County Sheriff’s Department despite demonstrators insisting they are unarmed.

That these headlined stories were published in places like New York, LA, Atlanta — or otherwise, far removed from the action — is fitting. In the aftermath of the presidential elections, critics have started defining this moment in journalism as a media collapse.

“This fight right now demonstrates the absolute vitalness for independent media and community journalism,” said Goldtooth, lead organizer for the Indigenous Environmental Network. The IEN is one advocacy group that has been galvanizing the anti-pipeline movement.

“That’s how this movement has grown,” he said.  “Thousands of voices across Mother Earth.”

In legacy media’s absence, millions of people learned about the weaponizing of water on protectors from Facebook, and more directly, Facebook LIVE. At one point Sunday evening, more than half-a-million people had tuned in to the live feeds of Kevin Gilbertt, an Englishman and poet who recently joined the fight at Standing Rock. From his commentary, viewers watched and listened to firsthand accounts of tear-gas victims and others returning from the front lines. Gilbertt’s often-pixelated footage was the world’s front-row seat to real-time drama that no news media from anywhere was covering. At least ABC had a good excuse. The network was broadcasting the 2016 American Music Awards.

For weeks, it’s been mostly indigenous water protectors who have turned to Facebook to share their stories. The livestreams come in the form of the latest press event, or in one heated exchange, the public shaming of an official with the U.S. Army Corps of Engineers. These in-the-moment scenes have captured an essence of the movement perhaps in ways that have bested traditional media.

But while this advocacy collective continues building on the North Dakota prairie, there still remains a dire need for legacy media to stay focused on this fight. The potential for loss of life is increasing. Sunday night inched closer to this reality.

Last week, Energy Transfer Partners, the pipeline operator, reportedly announced it will refuse any option to reroute the energy project away from the Standing Rock Sioux tribe’s water supply at the confluence of the Missouri and Cannonball Rivers. Meanwhile, those in opposition of the nearly 1,200-mile pipeline have vowed to stand their ground, even as winter nears.

“They want to kill people for clearing a road,” questioned Tara Houska, referencing police spraying people with water cannons in 26-degree weather. The national campaigns director of Honor the Earth reminded her friends and followers that November is Native American Heritage Month.

“When will our cries be heard?”