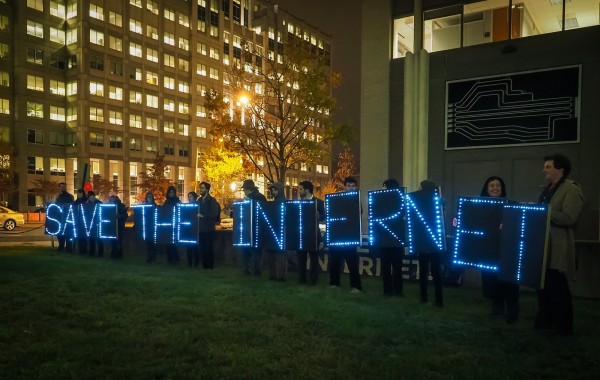 Above photo from the party at the FCC by Joe Newman.

Yesterday, our ten month campaign to save the Internet (which built on ten years of work) had an against-all-odds victory when the Chairman of the FCC announced that the Internet would be reclassified as a public utility under Title II of the Federal Communications Act.

Ok that’s a mouth full. But if you remember, this is why we camped outside the FCC last May and continued to protest throughout the year– so that the Internet would be reclassified. This is a crucial step to guarantee net neutrality which means that we all have equal access to content on the Internet and it can’t be turned into a pay-to-play scheme like cable TV.

This is a victory of people power over corporate power, indeed over one of the most powerful lobbies in Washington, DC the telecom industry!

The battle is not quite over. Our countdown has begun. In three weeks, the FCC will approve the final rules. Between now and then the cable and telecom industry will do all they can to put in loopholes that favor their profits over the public interest. They have also been trying to get Congress to act against the public interest, but so far those proposals seem dead in the water.

So, more work is needed but it looks like we, along with an excellent coalition of Net Neutrality activists, are going to succeed.

This new rule will prevent a tiered Internet where wealthy corporations have fast service and the rest of us have slow service. It will mean a level playing field on the Internet for start-ups, small businesses and entrepreneurs so the Internet continues to be a tool for innovation. For our work it means that the citizen’s media which includes independent media outlets, advocacy web pages and social media can continue to build its strength and become the main source for media information, overtaking the commercial media.

This is a tremendous victory for all of us. It impacts all of our work and affects everyone who is involved in the movement for social, economic and environmental justice.

Take the pledge below so you will be kept up to date on actions:

The New Rules: Where we go from here

On February 4, 2015, Chairman Tom Wheeler explained that he was proposing:

“. . .the strongest open internet protections ever proposed by the FCC. These enforceable, bright-line rules will ban paid prioritization, and the blocking and throttling of lawful content and services. I propose to fully apply—for the first time ever—those bright-line rules to mobile broadband. My proposal assures the rights of internet users to go where they want, when they want, and the rights of innovators to introduce new products without asking anyone’s permission.”

When Popular Resistance joined the net neutrality campaign 10 months ago we were told that what we wanted, reclassification of the Internet as a public utility under Title II, was impossible. We were told it was not on the political table. On November 15 we published a newsletter, “A Case Study In People Power,” which described the actions we took with a broad coalition of net neutrality advocates.

Since then, the coalition has continued to keep the pressure on for net neutrality. In January, it began to leak out that Wheeler was going for Title II reclassification. We shifted our attention to the telecom industry, protesting twice at their trade association, and other groups developed creative tools to pressure members of Congress who were caving to industry lobbyists.

While reclassification of the Internet by the FCC is a historic and critical step, we know that the telecoms are not going to give up easily.

Here are important next steps:

There’s more to do

The most important lesson from the campaign to save the Internet is that people have power. When we educate ourselves and mobilize in strategic way,s we can win. This is an important lesson as we know we live in a country where corporate power dominates government and many think we are powerless against it. In fact, we have more power than we realize. When we organize and use it, we can win.

When we win this, we need to keep organizing. The Internet needs to continue to be improved. It needs to be faster, provide access to rural and poor communities and the cost for service needs to be lowered. We need to separate those who deliver Internet content from those who create the content to make sure that there is no conflict in interest.

We also need to prevent further monopolization of the Internet by stopping the Comcast-Time Warner merger and working to put in place public ownership of Internet access. Cities with public ownership have better service than those where access is controlled by private corporations.

The movement for social, economic and environmental justice also needs to consciously organize its activities online so that the citizen’s media overtakes the influence of the commercial media. We are much closer to that reality than we realize and if we act with intention, it is something we can achieve together.

Another threat to the Internet is looming

Right now another important political conflict is occurring – stopping Fast Track trade authority for the Trans-Pacific Partnership (TPP) and other corporate trade agreements. These corporate trade agreements could undo all of our work to protect the Internet by forcing our laws to be in compliance with those written by the corporations who are working with our trade negotiators.

It is hard to overstate the importance of this issue. On our radio show last week Nancy Price of the Alliance for Democracy explained that the version of Fast Track being considered could last seven years (four years with an option for three more years).

That would mean seven years of secretly negotiated trade agreements, with hundreds of transnational corporations working with the US Trade Representative to draft them. They are writing trade agreements that will cement corporate control of the global economy and governments throughout the world. This will make it impossible to pass laws in the public interest.

We need to understand we have power and use it. We have won an important victory, but there are many more victories ahead that we can and must win.

Take the pledge above to be kept up to date.

And click here to make a donation if you are able to support this work.