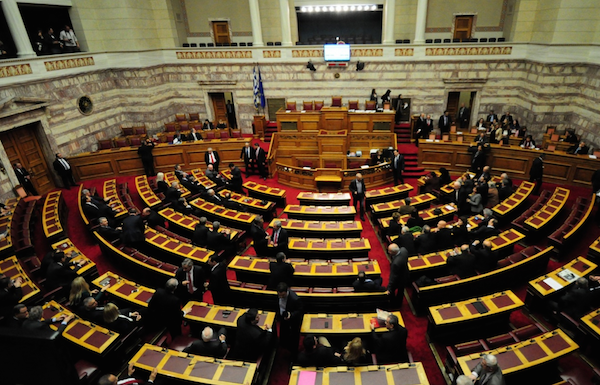 Major Opportunity For Anti-Austerity Left Party In Greece On Horizon

The first ballot for the election of a new Greek president takes place in Athens. Photograph: Wassilios Aswestopoulos/NurPhoto/Corbis

Early elections with the potential to destabilise the eurozone could be called in Greece next year, after the country’s 300 MPs failed to elect a president in their first round of voting.

“There are another two rounds ahead of us,” Antonis Samaras, the prime minister, said, emerging from the parliament after the vote. “I hold hope that a president will be elected. The conditions are difficult for the country, and I am certain that deputies are aware that the country must not enter troubled times.”

Earlier in the day, the embattled leader had warned that failure to elect a head of state could prove fatal for the country’s future in the eurozone.

“Tonight, the first vote for the election of the president of the republic will be conducted,” he had said in a statement. “A positive ballot by MPs should certainly not be considered as a vote in favour of the government but as a decision to defend the constitution and respect the institution of the President of the Republic.”

By electing a new head of state – and avoiding the general elections that would be automatically triggered if all three polls failed to back the government’s candidate – Greece would avert unforeseen political turmoil, Samaras said. “[It will] prevent a political adventure that could end up being fatal for the European course of the country.”

Polls released early on Wednesday had reinforced surveys suggesting the far left Syriza party would win in the event of snap elections. The prospect of the radicals assuming power has spooked international markets, reviving fears that twice bailed-out Athens could reignite the eurozone crisis.

Reacting to the result, Alexis Tsipras, Syriza’s leader, said: “The scaremongering of recent days fell on stony ground. The strategy of fear has collapsed. Tomorrow will be a new day that is more optimistic because democracy cannot be blackmailed.”

The main opposition party had accused the government of waging a “terror campaign” to frighten MPs ahead of the vote. Samaras has repeatedly said a Syriza electoral victory would lead the country to economic collapse and exit from the eurozone.

The high-stakes vote, brought forward by the coalition in an effort to quash the political uncertainty plaguing Greece, had unleashed frenetic politicking as Samaras’s fragile alliance had tried to crack target numbers.

To win, Dimas had to be endorsed by 200 MPs in the first round. Together, the conservative New Democracy and socialist Pasok parties control 155 seats.

But, while acknowledging the impossibility of attaining 200 votes, officials had said the first round would be significant as a barometer of how the government was likely to fare. “We will consider 165 votes a success,” said one well-placed insider. “We are all expecting this to go to the third round when 180 votes are required and, by then, we are sure that several vacillating MPs will go with their conscience and do what is right for the country.”

Government insiders also concede that the ballot is likely to be insecure until the last name is called in the final vote on 29 December.

With every vote vital, authorities took the unprecedented step of allowing the imprisoned leadership of the neo-Nazi Golden Dawn to participate in the election. The seven deputies, including Nikos Michaloliakos, the party leader, will be transferred under armed guard from Athens’s high-security Korydallos prison to parliament, a little before the vote begins at 7pm. The MPs have been placed in pre-trial detention on charges of using the neo-fascist group as a front to run a criminal organisation.

The party, which has a 16 strong presence in the House – after two of its MPs broke ranks – had said prior to the vote it would reject Dimas’ candidacy in the first round. Of the 24-strong bloc of non-aligned independent MPs, eight had originally signalled they would vote for the government ahead of the ballot. Lawmakers with the opposition Independent Greeks and Democratic Left parties had said they would oppose Dimas – raising the spectre that, ultimately, much could depend on the stance of Golden Dawn in the third and final round.