Above: Fight for $15 “Reject Puzder” banner drop from Hardees corporate headquarters, February 2017. In the first defeat for a nominee for President Trump’s cabinet, Andy Puzder, nominated to be Secretary of Labor is withdrawing. His controversial nomination has had the confirmation hearings delayed five times. Puzder has faced an unrelenting campaign by #FightFor15. They recently took over Hardees corporate headquarters and dropped banners urging him to be rejected. 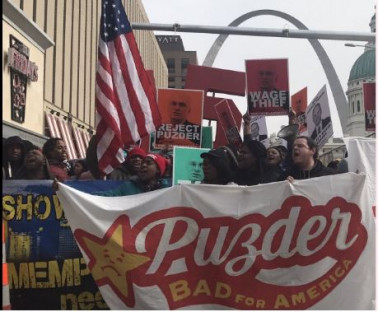 #FightFor$15 raised issues about his refusal to pay overtime, fair wages, his widespread violations of labor laws, safety laws and laws against discrimination. They have recently emphasized that  Puzder didn’t pay legally required taxes for his housekeeper for many years and that he only paid up when pressured to do so because of his nomination.

#FightFor15 has shown itself to be a workers campaign that cannot be ignored. They have won raises in minimum wages in cities and states around the country and now have shown they can defeat a nominee for Secretary of Labor.  Support for Puzder has eroded. No Democrat was going to vote for his confirmation and reportedly up to seven Republicans were indicated they did not support him and there were four definite ‘no’ votes.

Republican leaders warned Trump and urge Puzder to be dropped before the hearings on his confirmation begin tomorrow. Today, it is being reported that Puzder will no longer seek the nomination.

Darin Brooks, a Hardee’s worker and a member of Raise Up $15, the Fight for $15 chapter in Durham, N.C. said: “When Donald Trump first tapped Andy Puzder to be labor secretary, fast-food workers told the President that if he sided with fast-food CEOs instead of fast-food workers, he’d be on the wrong side of history. We rallied outside Puzder’s stores nationwide and showed America how his burger empire was built on low pay, wage theft, sexual harassment and intimidation. And today, we are on the right side of history. This is a major victory for the Fight for $15, but we can’t and won’t back down until the Trump Administration gives us a real labor secretary who will put working people over corporate profits.”

President Trump received a lot of support from workers who are mistreated by their employers and who are underpaid. Hopefully, this defeat will lead to Trump realizing his nominee for Secretary of Labor should serve those millions of workers who voted for him. If not, resistance to his administration will grow.