Making Sense Of NAFTA And Its Replacement

(June 10, 2019) — In 2016, Donald Trump’s trade message was very simple: the North American Free Trade Agreement (NAFTA) was the worst trade deal ever negotiated. He has renegotiated NAFTA, rebranding the deal as the United States-Mexico-Canada Agreement (USMCA). We never quite understood his objection to the original NAFTA, and we don’t understand how USMCA fixes it. You need to squint to see the difference between NAFTA and its replacement.

“I have a gut, and my gut tells me more sometimes than anybody else’s brain can ever tell me,” Trump has said. His gut instinct said NAFTA was bad. Unfortunately, gut instinct is typically simplistic, often impulsive, and by definition not strategic or coherent.

Since 1980, the prevailing political message has been, “Markets will solve all our problems. Government is the problem.”

The term for this is neoliberalism. “Neo” means new. In the language of economics, “liberal” means “liberated” or free from regulation. Neoliberalism “frees” markets by shrinking government, dismantling social programs, and cutting investment in education and research-and-development.

Many of our biggest problems — climate change, growing income inequality, health care, food safety, and workplace safety — are textbook market failures. Neoliberalism responds with its universal prescription — make business succeed and well-being will trickle down to the rest of us.

NAFTA is a direct reflection of those principles. In free trade orthodoxy, investor interests are more important than public interests. The NAFTA model blurs national identities and national boundaries, devalues the idea of public interest, and merges our domestic economy into the global economy.

GE, Apple, Exxon, General Motors and other large global companies move production to low-wage countries, putting the short-term interests of their investors above the long-term well-being of everyone else. By design, NAFTA helps global companies do that.

The consequences are predictable — deindustrialization of our economy, inequality, a scary weakening of social cohesion, and political instability.

China has approached globalization very differently. Their “Made in China 2025” strategy is a comprehensive manufacturing strategy that targets 10 industries of the future. China’s One Belt One Road program is an equally impressive global infrastructure strategy that strengthens China’s export strategy.

We used to make public investments in infrastructure, education, and research in new technologies.

In the ’30s, the Great Depression discredited laissez faire capitalism. President Franklin D. Roosevelt felt huge popular pressure to “do something.” He introduced the New Deal, which was fundamentally a statement that government played a legitimate role in managing the economy — to address market failures and improve well-being. 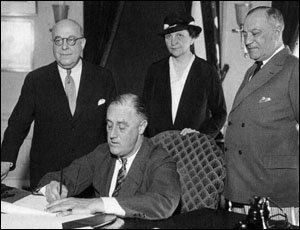 The New Deal was a trial-and-error exercise in industrial policy, with some steps forward and some steps back. We strengthened rights for workers, created the Securities and Exchange Commission to regulate corporations, modernized the role of the Federal Reserve, brought electricity (infrastructure) to rural America with the TVA and Bonneville Power Administration. We built airports, bridges, tunnels, levees, waterways, and other public works, we opened national parks, and established social safety net programs like Social Security, unemployment insurance, and workers’ compensation.

In the post-war period, we created the Marshall Plan which rebuilt Europe’s economy, to our advantage. A generation of soldiers went to college with the GI bill. We built the interstate highway system, passed Medicare and Medicaid, successfully managed the space program, subsidized higher education generally, and invested billions in basic science and R&D. Perhaps our last great exercises in industrial policy were public investments that led to the Internet, GPS, and global communications.

Social cohesion improved with civil rights legislation, rights for women, and fair housing. We created the EPA, with a mandate for clean air and clean water. These national policies raised living standards, and shared prosperity (with significant exceptions). 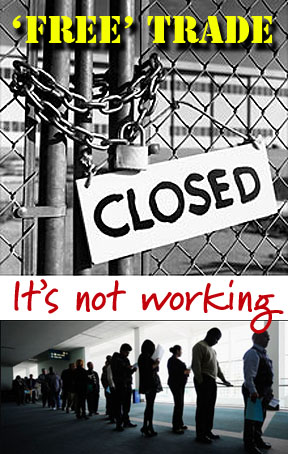 We need to acknowledge several principles:

●  The neoliberal approach is exhausted socially, politically and economically.

●  The purpose of an economy is to raise living standards and improve well-being generally.

●  The purpose of a political system is to make sure the economy raises living standards and improves well-being generally.

●  Every country has its national identity and legitimate national interests.

●  Every country in the world has an industrial policy. Japan, South Korea, and Singapore made extraordinary leaps from third-world status to first-world status, using well-crafted national strategies. China has elevated industrial policy to a fine art. Germany, the Nordic countries, and others have pretty good ones. Ours sucks.

●  Industrial policy is the philosophical opposite of free trade. The U.S. Trade Representative’s General Counsel once explained that his job under neoliberal trade rules was to search the earth for industrial policies and oppose them. That’s why NAFTA cannot be fixed incrementally.

●  We need national strategies to address the defining problems of our time: inequality, deindustrialization of our economy, and climate change.

THEN, we can write a new trade policy that manages legitimate national strategies in the global economy.

Democracies settle such questions in elections.

In 2016, Donald Trump defeated 16 establishment rivals in the primaries, and one more establishment rival in the general election. His voters wanted someone who would fight for them, not leave them behind. That is a political fact.

The Green New Deal could be our next big industrial policy — with trial-and-error like Roosevelt’s New Deal of the 30’s. We have obvious infrastructure challenges that will require public investment. Curiously, the most interesting items in USMCA are modest industrial policies.

Our health care system is arguably among the 3 or 4 biggest market failures in human history. We could approach public health with a coherent strategic national policy that makes us more competitive economically.

The 2016 election broke the spell of “free trade” neoliberalism. In 2018, candidates won with policies that put people first. Candidates for 2020 are just now proposing serious national strategies for the economy and environment. We will see more.

Trying to “fix” NAFTA incrementally is futile. First, we need to see national policies that will rebuild our economy, raise living standards, and improve well-being. Then we can write a trade policy to match.