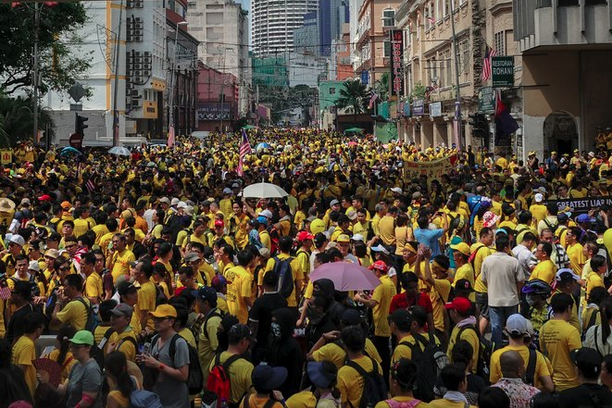 Xanthophobia: fear of the colour yellow

On Thursday, the Home Ministry of Malaysia decided to ban a primary color.

Why? Because the people of Malaysia have gotten sick of the political corruption.

Tens of thousands of demonstrators in Malaysia defied police orders on Saturday, massing in the capital in a display of anger at the government of Prime Minister Najib Razak, who has been accused of corruption involving hundreds of millions of dollars.
The demonstration in central Kuala Lumpur, which had been planned for weeks, was declared illegal by the Malaysian police, and on Friday the government went as far as to pass a decree banning the yellow clothing worn by the protesters.

The issue here is how $630 million dollars got transferred into a personal bank account controlled by Prime Minister Najib Razak. Mr. Najib has admitted he received the money, but said “it was a donation from undisclosed Arab royalty”.
What’s more, the money has been traced back to a Malaysian sovereign wealth fund called 1Malaysia Development Berhad, or 1MDB

One group of protesters on Saturday carried the image of a giant check in the amount of 2.6 billion ringgit, with a sign that read, “You really think we are stupid?”

When the scandal first surfaced and the investigation began, Najib responded by firing the country’s attorney general and removing the deputy prime minister, who had called for further investigations.
Furthermore, the ruling political party has revived a colonial-era Sedition Act in order to target human rights defenders.

Compounding the scandal is stories that his wife spends money like Imelda Marcos.

There is one other twist to this story that most American news media coverage fails to mention. Which corrupt bank do you think helped Mr. Najib launder so much money?
I’ll give you a hint: It’s the bank you would most associate with political corruption – Goldman Sachs.

Goldman helped 1MDB raise a total of $6.5 billion from three bond issues in 2012 and 2013. Even at the time, the deals were controversial because they were so lucrative for the bank. Goldman earned roughly $590 million in fees, commissions and expenses from underwriting the bonds, according to a person familiar with the situation – a massive 9.1 percent of the total raised. That was almost four times the typical rate for a quasi-sovereign bond at the time. It exceeds what Wall Street firms can charge in what has traditionally been their most lucrative work: taking companies public in the United States..
Malaysian opposition politician Tony Pua said earlier this year that 1MDB had been “royally screwed” by the deals.

So Goldman Sachs stole almost as much money from the Malaysian people as Mr. Najib did.