Man Dressed As A Pig Arrested For Impersonating An Officer

Above: Steven Peers, 46, from New Moston, is arrested on suspicion of impersonating a police officer in Manchester

Do the police see the irony of their actions? Can a pig be confused with a police officer?

Below is a video of their protest against police brutality against fracking protesters.  You decide whether anyone would think they were actually impersonating the police. No doubt doing the protest near the police headquarters was upsetting to police officials, but the intent of the protest was to mock them and upset them.

A man who dressed up in a pig mask, toy bobby’s helmet and hi-vis jacket was arrested on suspicion of impersonating a police officer.

Steven Peers said he has often donned the mock outfit to perform ‘comical parodies’ of Greater Manchester Police after becoming unhappy with how officers behaved during the Barton Moss anti-fracking protests.

He wore it around Manchester city centre while filming sketches yesterday but was stopped by an officer near Bootle Street police station.

Video of the incident shows the policeman pose questions about the outfit before arresting Mr Peers, 46, on suspicion of impersonating a police officer.

Father-of-four Mr Peers was held in custody for eight hours before being bailed until July – while the outfit was confiscated.

He said: “My reaction to being arrested was total disbelief. I was wearing a toy hat and a pig mask and was arrested for impersonating a police officer. It’s ridiculous.

“If they want to take it to court they will be a laughing stock because there is no substance to it whatsoever.”

Mr Peers, who lives in New Moston, regularly visited the anti-fracking protest at Barton Moss, in Eccles, to film the demonstration, which became known for its clashes between police and environmental campaigners.

He featured in the M.E.N. in February accusing an officer of lying to detain him on a‘trumped-up’ charge of refusing a breath test.

The case against him fell apart at court when prosecutors offered no evidence and the Independent Police Complaints Commission is supervising an investigation into the arrest.

Mr Peers, an electrical engineer, said he began performing skits using his comic character ‘Officer 666’ to highlight the ‘violence, corruption and bad behaviour’ which he believes has been carried out by GMP.

He said: “I don’t think it’s antagonistic. It’s just a parody making fun of GMP. I’ve dressed like this at Barton Moss, in front of Swinton police station and in front of the force HQ in Newton Heath. Other officers have laughed it off.”

A GMP spokesman said: “At about 4pm on Thursday 22 May 2014, a man was arrested in Manchester city centre on suspicion of impersonating a police officer.“He was released on bail until 17 July 2014 pending further inquiries.”

Here’s the back story, the people were protesting the police beating of a woman who was a fracking protester.

“I got sent to prison for being accused of doing that shit. Three grown men battering a woman on the floor…I’m in shock.” Bez

Vanda, the mother of four who made headlines last month after her brutal arrest by officers from Greater Manchester Police Tactical Aid Unit, was again arrested and beaten at Barton Moss this morning in the full gaze of the media – and Happy Mondays star, Bez, who was on the front line of the anti-fracking protest.

“It’s a disgrace” he told the Salford Star “A peaceful protest and… to arrest someone, smashing their head on the floor is not right is it? Especially a woman…” 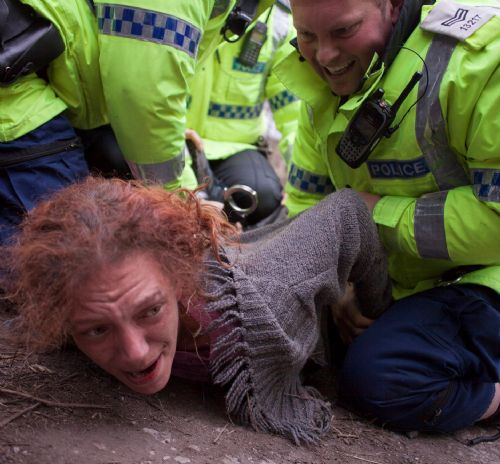 Happy Mondays star, Bez, came to Barton Moss this morning to raise the issues around anti-fracking. Instead he witnessed numerous arrests and yet more brutality from the Greater Manchester Police Tactical Aid Unit.

From the start of the slow walk in front of lorries delivering to the IGas exploratory drilling site, police were sending snatch squads into the lines of peaceful protectors, with over a dozen arrests along the route.

The final arrest sickened, not just Bez, but everyone present, as Vanda – the mother of four who was brutally dragged across a muddy field in handcuffs last month, injured and left on the floor for 45 minutes waiting for an ambulance (seeprevious Salford Star articles click here and click here) – was not only arrested but beaten. In front of eye witnesses, including the Salford Star reporting team…

“As a journalist you try and remain neutral but when you see totally violent and out of control policing you have to speak up. I saw one of the arresting officers repeatedly punch Vanda in the stomach.

“I went around to the other side of the fence to which the police had her pinned and saw blood dripping from her face and absolute fear in her eyes. She was screaming while an officer had his hands around her neck. When Vanda was previously arrested the road was sealed off and our reports had to rely on video footage and photographs. This I saw with my own eyes.

“The amazing thing is that officers did this in the full glare of the media which was there to photograph Bez. It’s almost like they are trying to send a message out that `If you come to a peaceful protest at Barton Moss you too can expect this treatment’.

“And the other amazing thing is that not one single Salford councillor or the Salford City Mayor Ian Stewart has so much as raised a murmur about such events which are happening almost on a daily basis on their doorstep. And these are mainly Labour Party people who would probably have plenty to say about the policing of the miners strike thirty years ago. They should all hang their heads in shame.”

“I was stood next to Vanda when it started. She turned to face the officer stood behind her and said ‘I have been doing this for years and I know exactly how far away from you I need to stand’. She then turned around and within seconds the officers pounced on her. The level of violence shown towards her was horrifying, at one point they were pushing her head into the ground and laughing at her.“

“It’s a disgrace really – a peaceful protest, and to arrest someone in a violating way,smashing their head on the floor is not right is it? Especially a woman. I got sent to prison for being accused of doing that shit. Three grown men battering a woman on the floor? I’m in shock by their actions. I expect more of people who are supposed to be protecting us.

“The Salford Mayor? He’s been silenced not to say anything about it. But people need to turn off the tv. We’ve got to stop the dumbing down and get people awake to what’s happening and to become more aware and add their voice to the protest.

“I would say to people from Salford and everywhere…`If you’ve got the time and can do this sort of thing you should be here…If you can’t get down here there are other ways you can show your support’. It’s not everyone’s job to be on the front line, there’s other things people can do to help along the way…”

And if you are on the front line of peaceful protest in Salford, today the Greater Manchester Police showed where their priorities lie…