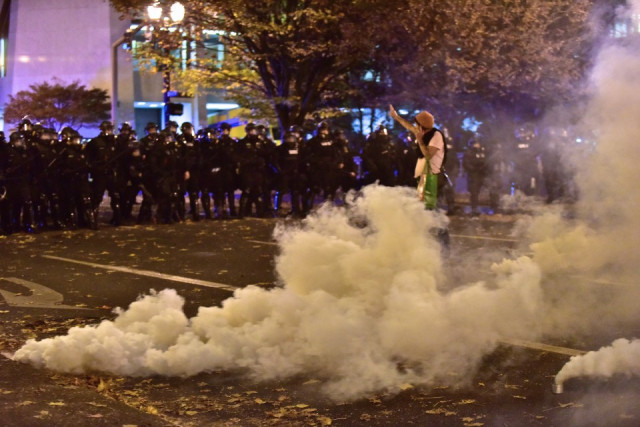 Portland, OR – The fourth round of mass demonstrations in Portland against Donald Trump’s election came to a violent end early Saturday morning when someone shot a protester on the Morrison Bridge.

Police said the protester, who wasn’t publicly identified, suffered injuries that weren’t life threatening. The shooter left the area, likely in a car, Portland police said in a news release.

The shooting appears to be the only one reported at an anti-Trump protest nationwide. More than 225 people have been arrested at demonstrations in various cities, the Washington Post reported. Most demonstrations across the country have remained peaceful, but some violence has been reported, the Post said. In Oakland, California, protesters reportedly threw rocks and fireworks at police officers, injuring three.

The protest, which started early Friday evening, appeared to be in its final stages as demonstrators marched across the bridge from east to west shortly before 1 a.m. Saturday. Protesters had marched around the city throughout the night, and police in riot gear used tear gas and flash-bang grenades during standoffs to clear them from certain areas.

Shawna Hall, a North Plains resident who was filming the protests, said she witnessed the shooting and circumstances beforehand.

Protesters were walking west on the Morrison Bridge, and she said some of them were blocking eastbound lanes.

Hall, 28, said the car carrying the gunman navigated around other vehicles and stopped on the bridge. She said a rear passenger exited the car and pulled a gun.

Another demonstrator said the man was shot in the leg. Six pops, presumably gunshots, can be heard on video shot on the bridge. Police said early information indicated the shooter was in a car, that there was a confrontation with a protester, and that the shooter exited the car and fired multiple shots, hitting a protester. The shooting victim was taken to a hospital. At least one protest medic tended to the man, and some demonstrators tried to keep others from getting too close. Officers arrived quickly and cleared the bridge, deploying an apparent flash bang grenade in the process.

Micah Rhodes, a Don’t Shoot Portland leader, addressed protesters who remained around the foot of the bridge afterward, saying, in part, that the shooting wasn’t protesters’ fault. “We did our demonstrations today,” he said. “A lot of people are a little bit shaken up because of the situation. A lot of people want to go home. I think that’s probably a good idea to call it a day, to stay safe and to come back another day when we can reconvene and come back stronger and not as defeated.”

Police described the shooter as being 5-foot-8 and in his late teens. He has a thin build and was wearing a dark hoodie and blue jeans. Police said he left the scene, likely in a gray or silver sedan. Police didn’t immediately release any additional information about the shooting. They asked anyone who witnessed the shooting or has information about it to call the police bureau’s non-emergency line, 503-823-3333.