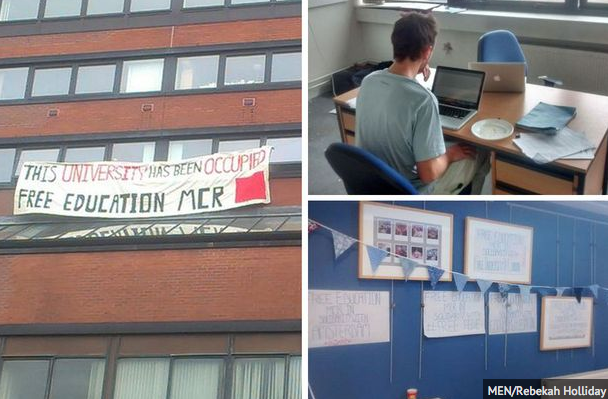 Around 30 students are set to spend a second evening barricaded inside a building at the University of Manchester in protest at government cuts.

The protesters are refusing to leave after occupying the Manchester Business School building yesterday afternoon.

A group called Free Education MCR have claimed they set up the occupation to make a stand against five more years of ‘Tory cuts and privatisation’ following last week’s general election.

The University of Manchester has said the protest is causing disruption to the institution but has made arrangements for students to remain safe while inside.

See below for a recap of how events unfolded earlier today.

The demonstration started inside the Harold Hankins Building at Manchester Business School on Wednesday afternoon and the campaigners are refusing to leave.

The Free Education MCR group say on their Facebook page: “The University of Manchester is in occupation. We are occupying because we know what five more years of a Tory government means.

“It means the hopes of millions of young people and workers shattered by cuts and privatisation. There is talk of another rise in tuition fees, funding apprenticeships through 24 cuts to further education, and scrapping the disabled students allowance once and for all.”

5:11 pm
Students making their cause heard

Statement from the protesters

Here’s a statement from Free Education MCR, in which they say they are protesting over a potential further rise of tuition fees and because ‘education is more than a business’.

It reads: “The University of Manchester is in occupation. We are occupying because we know what five more years of a Tory government means.

“It means the hopes of millions of young people and workers shattered by cuts and privatisation. There is talk of another rise in tuition fees, funding apprenticeships through 24 per cent cuts to further education, and scrapping the disabled students allowance once and for all.

“We know what the market does to education, and we know we need to fight it.

“We are occupying to reclaim space from the university’s corporate projects—and to use it to educate ourselves freely.

“The area we are in is being redeveloped into a £50m hotel and ‘executive education centre’. We are occupying to begin to create a space where we are more than customers, and education is more than a business.”

5:18 pm
Reporter speaks to protesters at the scene

Helen Johnson, from our sister paper the Manchester Evening News, is at the scene and believes the protest won’t be coming to an end any time soon.

5:20 pm
Picture from inside the building

The protesters have released this picture from inside the Harold Hankins Building at Manchester Business School, which has been occupied by around 30 students

M.E.N reporter Helen Johnson has been speaking to students outside the university building – including Alex Craig who came down to show his solidarity

The Free Education MCR have released a long list of ‘demands’ on its Facebook page, listed under four categories ‘free education’, ‘liberation’, ‘democracy’ and ‘workers rights’.

It’s a lengthy list – but among the things they are calling for is for the University of Manchester to publicly express support for a free education system, that all students and staff are given a vote in the upcoming election of the chancellor and the university becomes an accredited Living Wage employer.

5:48 pm
‘This university has been occupied’

Here’s a picture from earlier of students working on the banner which is currently displayed outside the Manchester Business School building.

The University of Manchester protest is happening simultaneously to an occupation at Edinburgh University over its investment in fossil fuels.

Around 30 students occupied the lobby of the uni’s finance department yesterday afternoon and have been backed by dozens of campaigners.

6:05 pm
Statement from the university

Here’s a statement from the University of Manchester on the situation.

It has said the protest is disrupting the running of the university but added it will allow food to be delivered to the site by members of the Students’ Union.

A spokesman said: “The University supports the right of anyone to demonstrate peacefully within the law; however, the occupation of University buildings disrupts the daily running of the institution.

“A number of students are occupying a room in the Harold Hankins Building and are free to leave anytime they wish.

“The University has made an offer to the Students’ Union that members of its executive will be allowed to deliver food to the protesters and check on their wellbeing; the students already have access to fresh water.

“In order to ensure the health and safety of everybody in the building, the University has informed the protesters that appropriate staff may require access to the room to conduct checks and assessment.”

6:08 pm
New picture from inside the building

We mentioned the similar protest currently happening in Edinburgh earlier in the blog. Well the Free Education MCR group have released a picture from inside their occupation expressing their support.

Mirror readers have given their backing to the protest on our Facebook page, with the majority of people supporting the occupation.

Heather Nicholls said: “Yes when my kids were there it was £1500 tuition fees per year for my son. When the Tories were elected it doubled to £3000 and medical students it’s £10000 per year, hence universities will only be for the elite pretty soon

Lisa Read added: “Good on them, they should be more students all over doing the same. Stand up for what you believe in and what is right!!!”

But some have been less positive about the action.

David Edwards said: ‘Brainless idiots who do not understand a democratic vote, we all had a free vote and the Tories won fair and square, accept it..but…good luck to them lol.”

Around 30 students remain inside Manchester Business School this evening after occupying the building in protest over tuition fees and Tory cuts.

The University of Manchester has said students are not allowed to be there but has made arrangements to ensure their safety.

For further updates, visit the Manchester Evening News for their live blog.