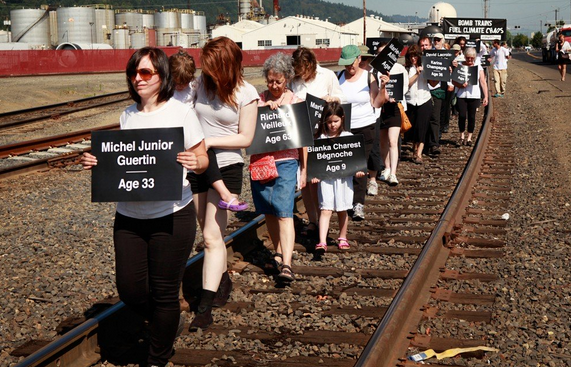 Photo: Outside Arc Logistics on 2nd anniversary of Lac-Mégantic.

It seems like just about every week Portland is receiving some sort of new award or recognition for sustainability. We certainly built up a legacy of ecological awareness early-on. Tom McCall, our republican governor in the 60’s and 70’s, advocated for protecting the Commons and cleaning up our watersheds and airsheds. Portland was also ahead of other cities in the West in its commitment to smart urban planning and transportation justice. It only makes sense that Portland is ground zero for the climate fight, but maybe not for the reasons one would think.

While we’ve been told by City Hall and the media that we’ve already won the struggle for a greener future here in Portland, the reality is even more twisted and dangerous than the fossil fuel metropolises of Calgary or Houston. While the dream of Little Beirut fades to the parody of Portlandia and the people trade their banners and blockades for hybrid cars and LEED-certified condos, the fossil fuel industry has found a way to entrench itself in our own communities without the public’s knowledge, consent, or resistance.

The list is exhausting and in progress, but we must understand how deep the fossil fuel industry has embedded itself to our city so we can deconstruct the system that empowers them to profit off violence against us all.

Climate Riders blockading the entrance to the Precision Castparts headquarters.

Evraz North America constructs the steel pipe for oil and gas pipelines like the Keystone XL while Greenbrier Cos./Gunderson Marine and Vigor Industrial build the oil and coal railcars and barges that turn our railroads and rivers into pipelines with zero public knowledge of how much is moving through our communities. In Seattle and Portland, Vigor Industrial and Foss Maritime are contracting with Shell to maintain and house the Arctic Drilling Fleet.

David Evans and Associates, as well as HDR and CH2M Hill, designs infrastructure projects and promote freeway expansions like the Columbia River Crossing that increase the market for a perpetual growth in fossil fuel consumption.

HDR and CH2M Hill build the terminals, refineries, and other infrastructure projects that move fossil fuels from the ground to market. After the land and water is inevitably contaminated by their own projects, they win massive no-bid government contracts to clean up their own mess with taxpayer dollars.

Timber companies like Koch-owned Georgia-Pacific release massive amounts of carbon into the atmosphere, having been sequestered into the soil for millions of years whilepermanently harming our ability to store carbon and replenish our watersheds.

And many companies directly move fossil fuels through Portland, often to be burned in Asia. Arc Logistics operates a 1.5 million-barrel capacity crude oil terminal, accepting oil trains from fracked and tar sands sources and ships it down the Willamette. Canadian company Pembina is planning on building a $500 million propane-by-rail export terminal from fracked oil and gas. The proposed site sits in an environmental protection area across from West Hayden Island, which will be hearing testimony on June 4th for a code change to allow for more fossil fuel facilities along our already-polluted rivers. And Kinder-Morgan,currently waging a war against the city of Burnaby over a massive and illegal tar sands pipeline on unceded First Nations land, is operating two petroleum terminals on the banks of the Willamette.

Despite greenwashing efforts, our non-municipal and undemocratic utility companies continue to cause climate change by acquiring a majority of our electricity from fossil fuels. NW Natural burns fracked gas, Pacific Power is the largest miner and burner of coal in the West, and PGE burns both coal and gas while releasing massive amounts of methane, an even more potent greenhouse gas than carbon dioxide, into the atmosphere from the dead reservoirs created by its dams.

And of course, all of these businesses continue to directly pollute our air andwatersheds right here in Portland on top of doing the same to frontline communities at all points of extraction and transportation. And their contributions to climate change threatens the existence of the vast majority of species on Earth, including our own.

To make matters worse, these industries receive subsidies, tax breaks, and loopholes that steal millions from the public while forcing us taxpayers to foot the bill for their environmental destruction. Accounting firms like Moss-Adams LLP specialize in helping these businesses figure out how to receive the most corporate welfare possible while also hiding their profits in tax havens overseas.

Most people don’t realize how entrenched the fossil fuel industry is in Portland. In fact, without Portland’s contributions, the fossil fuel industry and extraction would likely cease to function in its current capacity. But if we are such a sustainable city, and our government is truly passionate about fighting climate change, why aren’t they doing everything they can to shut these businesses down and strengthening our Climate Action Plan to recognize global impact on emissions?

Our local government and business institutions are supporting the fossil fuel industry from extraction to combustion, but they have greenwashed their image to make it consistent with the ideals of “Green” Capitalism. Portland has actually become a leader in creative branding and marketing, which includes the greenwashing of corporate polluters. Local public relations firms spin and obfuscate the facts on polluters while promising nothing more than “Jobs” that will apparently end our need for safe air, water, and food. PR firms like Gard Communications, Gallatin Public Affairs, Edelman, and CFM Communications are representing coal, oil, and gas terminals while simultaneously getting contracts from local institutions like Portland State, OPB, the Timbers, OnPoint Credit Union, and Travel Oregon.

Climate Riders shutting down CFM Communications right across from City of Portland.

Even institutions that are supposed to represent the interests of the environment and the community are playing a role in greenwashing the fossil fuel industry. SOLVE, one of Oregon’s largest environmental non-profits that was started by Tom McCall himself, gets volunteers to clean up litter and remove invasive species. However, the Board of Directorsis almost entirely made up of members of the fossil fuel industry and Wall Street. Their Board of Directors then hands out sustainability leadership awards to themselves so their corporations can advertise their green credentials. The work of committed community members who volunteer to plant native species is then turned around to promote the same companies that pollute our air, water, and climate far beyond their role in putting a bandaid on the problem. With their brands on full display at all of SOLVE’s events, environmental stewardship is nothing more than a minor marketing investment to these companies that would destroy the entire planet for wealth.

This branding of a Green® Portland allows the fossil fuel industry to continue unobstructed and invigorated while innovating new marketing strategies as more communities around the world resist the fossil fuel industry. In Portland, we have dozens of companies that profit off extraction, transport, and consumption of fossil fuels while our elected officials do nothing to address the environmental, social, and economic costs to Portlanders as part of their operations.

Industry groups lobby our elected officials for tax breaks, subsidies, and permits to pollute our air and water. One group, the Association of Oregon Industries consists of a broad range of fossil fuel interests, Wall Street banks, timber companies that tear down our carbon-storing forests, and even the Koch Brothers.

Our city council is bought by the fossil fuel industry they claim to oppose, while they simultaneously praise their role in our community. Charlie Hales went through the revolving door to HDR and Dan Saltzman worked for CH2M Hill. Mayor Hales and Commissioner Dan Saltzman have accepted tens of thousands of dollars in campaign contributions from the local fossil fuel industry and subsequently support their operations, including Fossil Fuel Charlie Hales investing $20 million of our city money in Exxon. Even Steve Novick’s largest donor is Greenbrier Cos. This is all in spite of City Council’s strong history of repeating rhetoric about climate justice.

And of course, Oregon’s statewide elected officials have a long history of comprehensivecampaign donations from the fossil fuel industry while they back oil-by-rail, LNG, and theTrans-Pacific Partnership.

Portland is a city with a legacy of ecological consciousness and its residents have been lied to. Right now we are the choke point for fossil fuel movements in Cascadia. Coal, oil, and gas are coming down the Columbia and right through our communities while an entire industry profits from extraction to combustion. With all current and proposed fossil fuel terminals South of the US border, Cascadia could transport five times as much carbon into the atmosphere as the Keystone XL, sealing our fate to climate catastrophe. If the fossil fuel industry can thrive in Portland through greenwashing and deceit, then they can continue elsewhere to extract and send profits to the wealthiest 1%. This new “Green” Capitalism is just as destructive as the old and with just as many marginalized communities as before.

True democratic movements are the only way to move beyond fossil fuels and towards a city that puts people, planet, and peace over profit. Grassroots organizations around Portland and around the world are working to elect new leaders who won’t accept money from corporate interests as well as pass laws through direct democracy that fundamentallychange the role of government to become trustees of the Commons, protecting ourCommunity Rights and the Rights of Nature while effectively shutting down the fossil fuel industry’s chokehold on our democracy.

But we need action now to physically stop the extraction, transport, and consumption of fossil fuels. We need to build solidarity across all communities within our city, our bioregion, and around the planet. A growing resistance is building against the fossil fuel industry in Portland with the Climate Action Coalition: environmental and social justice groups unified to participate in civil disobedience and direct action to stop the climate catastrophe. Climate change and the systems of oppression that cause it are the biggest threat to humanity that has ever existed, a threat that has been created by a wealthy elite in the name of profit and it’s our time to rise up at resist.