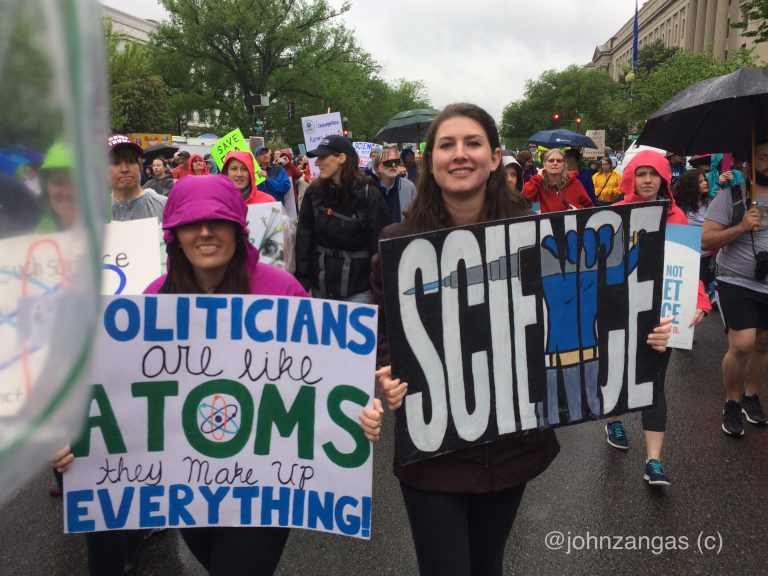 In spite of drenching rain tens of thousands of scientists and supporters came from around the country to Washington DC on Saturday to celebrate Earth Day. The all day rally took place at the Washington Monument and was followed by a walk to the Capitol.

It was the first ever massive March for Science held here, drawing professionals from a wide variety of fields of study including Astronomers, Doctors, Physicists, and Climatologists. Their message: government policies and legislation must be science based and take into count its affect on the well being and health of people and the planet.

Another major concern is administration cutback plans at government agencies such as the Environmental Protection Agency (EPA), and National Institute of Health (NIH), which safeguard the public.

The March for Science was deemed by organizers as a non partisan, non political event but based on the wording of many signs political viewpoints were evident everywhere. By the hundreds they carried various hand made signs spelling out topics of concern over recent policy changes which they believe if enacted will adversely affect people and planet. Some signs were technical references to science facts, while others were plain and direct.   “There is no Planet B” read one sign, “Science is not right or left”, and “The Oceans are rising and so are we” read others.

“I see a lot of good science has done for my patients and I feel like it’s vital that we continue to support it,” said Erika McKee, a nurse from Washington DC, marching with friends who are doctors and scientists working at the NIH. The administration is proposing a 20 percent funding cut of NIH.

Piper Petrocelli , who traveled from Illinois, carried a sign made by her niece reading “Stop denying the Earth is Dying” and showing the Earth with a bee flying towards a flower.

Petrocelli was concerned that bee colonies were being threatened by pesticide use. “I have to drive to work in Iowa sometimes and you can smell the pesticides on the fields,” she said. A climatologist from New Jersey, Nicole Gadda, painted a sign reading “Make Earth Cool Again,” a jab at a popular Trump campaign slogan.

Gadda said that her reason for going to the march was concern over climate change. “Trump wants to go back to coal but we can’t go backwards, we have to go forwards and solar and wind are the way of the future,” she said.
Gadda was surprised by the turnout. “We were gridlocked for an hour straight,” she said. Two hours after the march began, walkers were still feeding onto the route towards the Capitol.

Petrocelli was walking for her 9 year old niece and 11 year old nephew and feels that the administration is not concerned for the well being of the planet. “I would like to be able to eat fish in ten years or be able to do a number of things that won’t be doable,” she said.

The March for Science was held in over 600 cities across the planet, including Mexico City, London, New York, Chicago, and Los Angeles. A marcher from Maryland, Charles Strickler was there because he was concerned political activity was “sticking its head in the sand” over science and facts. “We need to honor science facts as they are,” he said.