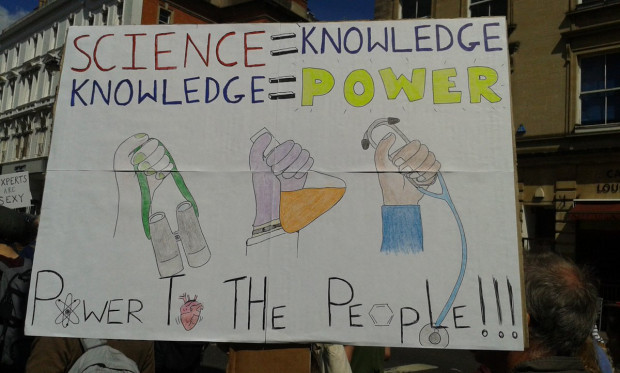 The March for Science champions robustly funded and publicly communicated science as a pillar of human freedom and prosperity. We unite as a diverse, nonpartisan group to call for science that upholds the common good and for political leaders and policy makers to enact evidence based policies in the public interest.

The March for Science is a celebration of science.  It’s not only about scientists and politicians; it is about the very real role that science plays in each of our lives and the need to respect and encourage research that gives us insight into the world.  Nevertheless, the march has generated a great deal of conversation around whether or not scientists should involve themselves in politics. In the face of an alarming trend toward discrediting scientific consensus and restricting scientific discovery, we might ask instead: can we afford not to speak out in its defense?

People who value science have remained silent for far too long in the face of policies that ignore scientific evidence and endanger both human life and the future of our world. New policies threaten to further restrict scientists’ ability to research and communicate their findings.  We face a possible future where people not only ignore scientific evidence, but seek to eliminate it entirely.  Staying silent is a luxury that we can no longer afford.  We must stand together and support science.

Below are tweets describing the March for Science:

Look at the Crowd in Chicago for the #marchforscience pic.twitter.com/X821UNNx7h

Even with the rain the streets at #MarchForScience are packed with people marching for a better world. pic.twitter.com/9uvRhjLxrA

Thousands of people turn out in #EarthDay March for Science: https://t.co/CnvX65nMop pic.twitter.com/L9dJ4wCdz9

At the March for Science, about 30-40,000 people showed up for the rally @MNSpokesman pic.twitter.com/0K3GWtAjKj

As the #MarchForScience rallies kick off across the USA ????????, here’s a look at what the rest of the world had been up to. Every continent! pic.twitter.com/zQKTDxlGF1

604. I guess there is something to this whole science thing. #MarchForScience pic.twitter.com/gEoJSERAiX