March On Harrisburg Barnstorms Across Pennsylvania To Restore Democracy

Last week, the special election in Pennsylvania’s 18th District made national headlines when the Democratic candidate for the state legislature, Conor Lamb, beat incumbent Republican Rep. Rick Saccone in a district that President Trump won by 20 points in 2016. Lamb’s victory was considered by many a potential sign of Republicans losing their stronghold in conservative districts with possible implications for the midterm elections in November. Behind these front page stories, however, a grassroots movement is gaining ground, paving the way for much more transformative change in Pennsylvania by pressuring for legislative reform in both parties.

Leading this charge is a group called March on Harrisburg, a grassroots movement to restore democracy in Pennsylvania through lobbying state legislators and engaging in nonviolent civil disobedience. Headed by 27-year-old rabbi Michael Pollack and comprised of a decentralized, creative network of 20 core organizers around the state, March on Harrisburg has organized intensive lobbying campaigns at the state legislature, several multi-day marches to the state capitol, numerous acts of civil disobedience and dozens of arrests.

In recent months, activists have held 18 local “barnstorming” events around the state, from the sleepy town of Slippery Rock to downtown Philadelphia. The events — which drew crowds as few as a dozen people to upwards 175 — were held in Unitarian Universalist churches and often featured speakers from local organizing campaigns like Lancaster Against Pipelines and Berks Gas Truth.

Pollack, a former fundraising intern for the Democratic National Committee, got the idea for this statewide pro-democracy movement while sitting in a jail cell in Washington, D.C. It was in April of 2016 and he had just been arrested with over a thousand other protesters as part of a mass civil disobedience led by the Democracy Spring movement, which was targeting big money in politics. Pollack saw how the march broke through echo chambers, allowing people to “do” democracy by walking and talking together. He also saw a need for something similar on the state level in Pennsylvania, and decided that in order to address existing divisions in society, corruption was the place to start.

“We are pro-democracy and anti-corruption,” Pollack said. “[Being anti-corruption] means standing against anything that divides people.” Bribery, he explained, is inherently divisive in how it creates an “in-group” and an “out-group”: Those who give and receive the bribes and everybody else. That division prevents people from connecting with each other and “feeling responsible” for each other, something Pollack said is a core part of his faith.

Living out this philosophy, March on Harrisburg takes a bipartisan approach to democratic reform. The group is focused specifically on the promotion of two pieces of legislation — a gift ban and a gerrymandering bill — which have bipartisan support in the Pennsylvania legislature. The bill limiting gift to public officers (SB 132, HB 39) was written by the recently-ousted Republican Rep. Saccone, while the gerrymandering bill (SB 22, HB 722) was written by four main sponsors — two Republicans and two Democrats — with the support from a nonpartisan statewide coalition called Fair Districts.

“It’s not always clear which is the party of corruption,” Pollack said. He added that March on Harrisburg often must respond to questions about why they engage with Republicans on the “other side,” but maintains that reaching across the aisle and finding solutions is a central part of their work. “We sit down with people who have [Make America Great Again] hats on their desk and talk with them as human beings, often with really great results.”

March on Harrisburg began taking action in January 2017 with a five-month-long lobby campaign. In May, the group marched from Philadelphia to Harrisburg, and conducted five nonviolent direct actions over the course of three days, leading to 28 arrests in total. One low-risk action done in the middle of a “Make the Second Amendment Great Again” rally occurred when the group dropped a banner that read “Make Corruption Illegal.” 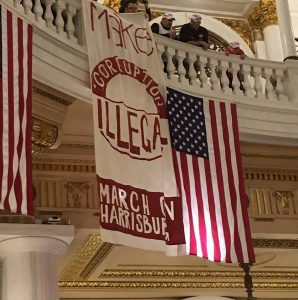 The group sought to schedule meetings to discuss the gift ban and gerrymandering bill with legislators like Rep. Daryl Metcalfe, who is the Republican Majority Chairman of the House State Government Committee. Metcalfe is notorious for his staunch right-wing views and has gained internet fame for on-screen outbursts, like the time he told a colleague in a committee meeting to “stop touching” him because he is “a heterosexual.”“We force the encounter,” said Pollack, who draws inspiration from the Serbian Otpor! movement. “We try to get as close to those in power and hope for a human response.”

To promote the gift ban, or House Bill 39, activists sent packages to Metcalfe’s office every day for 39 days that included a range of “gifts” — from plungers symbolizing the need to “drain the swamp” to baby bottles and rattles to office supplies that help schedule meetings to purple “nonpartisan” flowers. They also replaced the bars of soap in the Legislative Office Building with bars stamped with statistics like Pennsylvania being the 45th most corrupt state and 49th most gerrymandered.

When the group delivered gifts in person, Pollack made a grand symbolic gesture by taking off his shirt — along with the traditional Jewish undershirt he wears called a tzitzit — to say that, in effect, all he had left to offer was the shirt off his back. The tzitzit made this message particularly poignant, since it is worn as a reminder to act with responsibility for other people. They placed the gifts at the feet of the Capitol Police who were guarding the door to Metcalfe’s office.

In the video of the gift delivery, Pollack tells the police officers guarding Metcalfe’s door that “I can’t buy you a pizza, but I can give [Metcalfe] a briefcase full of cash.”

The group organized another march in November 2017 — this one from Lancaster to Harrisburg, lasting three days with 25 activists. But, in a move the activists suspect was done to avoid them, the House cancelled their session day and rescheduled it to take place over Thanksgiving week instead. Metcalfe was feeling the pressure after two recent town halls in which he was berated by constituents for not supporting the gift ban.

With the session canceled, the group had to quickly devise another creative action to get legislators’ attention. Activists dressed up as the elusive character from the “Where’s Waldo?” books and went into the legislative office building, where they held a nonviolent sit-in to tell constituents: “It’s easier to find Waldo than to find your representative.” 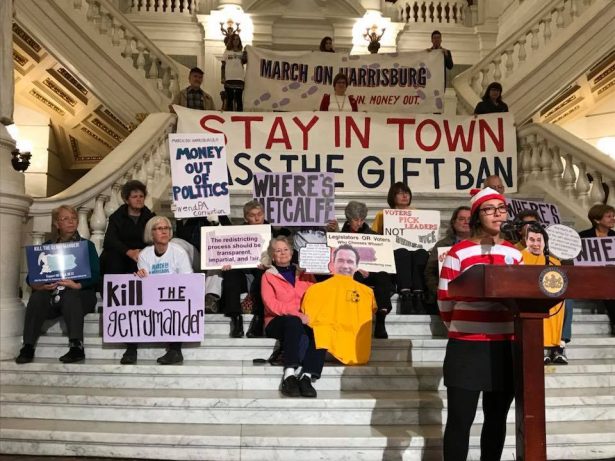 The group could tell they were making progress when they were featured in two episodes of Metcalfe’s YouTube series, “The Metcalfe Minute.” In the video called “Union-Endorsed Protesters,” Metcalfe said the protesters who occupied his office were “whining and yelling like a bunch of spoiled losers.” In “Rude Antics of the Left,” he decried “thuggery tactics” of “out-of-state protesters” and pledged to never let the bill out of committee because it would reward their behavior.

“It’s amazing how he does our PR for us,” Pollack said.

The movement’s momentum, including Metcalfe’s fiery rhetoric, have attracted the attention of experienced activists like Adam Eichen, who recently co-authored the book “Daring Democracy” with Frances Moore Lappé. Eichen joined March on Harrisburg for their barnstorming campaign this past month, helping to draw larger crowds and media attention. He said he was inspired to join March on Harrisburg’s barnstorming tour because he believes the anger and frustration people feel around the country can be channeled into nonviolent direct action to restore democracy. “Resistance leads to burnout,” he said. “But the democracy ‘movement of movements’ envisions the society we want.”

Throughout the weeks of barnstorming, Eichen recalled people approaching him after the presentation with “tears in their eyes,” saying how meaningful it was to be taking action. Moments like that give him hope that Americans are “not as divided as we think we are.”

A fusion of movements

March on Harrisburg plans to increase involvement by building coalitions with other activist movements in the region and across the country. One example is in the efforts of Kyle Moore, a March on Harrisburg organizer, who has also participated in several other national and state-level struggles in the past few months — from the Washington, D.C. protests against the health care repeal and tax bill to the more recent teachers’ strike in West Virginia. Moore spent two days filming and interviewing the teachers in West Virginia to share their stories over March on Harrisburg’s social media network. The movement shares close ties with the world of labor organizing and receives funding from The Teamsters, a 1.4-million-member industrial workers’ union.

In the future, March on Harrisburg aims to organize 203 local chapters, one for each state representative. They now have a system of committees for legislation, media, art, social media, and nonviolent direct action — as well as ones that pertain specifically to march logistics, such as medical care, food, safety, police liaison and lodging. The group will continue organizing around the gerrymandering bill, for which the voting deadline is June 30. If it fails to pass this year, it would take another decade to come up for a vote again due to the lengthy process of redistricting. They have also started working on a new bill for campaign finance reform in Philadelphia that could eventually be expanded statewide.

March on Harrisburg leaders actually got the idea to start holding barnstorming events after hearing one of the leaders of the Poor People’s Campaign, Rev. William Barber, speak about his own cross-country barnstorming efforts. And Barber, as it turns out, was following the example of Martin Luther King Jr., who journeyed to impoverished parts of the United States to promote the original Poor People’s Campaign in 1967-1968.

The connection between March on Harrisburg and the Poor People’s Campaign is an embodiment of what Barber — as well as activists like Pollack and Moore — call the “fusion of movements” coalescing around a set of issues affecting the poor and disenfranchised throughout the United States today.

Moving forward, March on Harrisburg aims to bring more and more people into the movement. Part of this requires a deeper moral questioning of how to engage with people across the political divide who also suffer from the effects of corruption. For Pollack, this makes the work that March on Harrisburg is undertaking a deeply spiritual one — one that requires him to grapple with the difficulty of forgiving one’s enemies in order to move forward.

“There’s this old debate: Can you ever forgive Pharoah for the suffering he caused?” Pollack explained. “I think about that a lot. It’s not easy to love your enemy, there’s no question. But the goal has never been to make peace with friends. The goal is to eventually sit down with [your enemy]. And when he says no, you have to shine a light on that.”

In the months ahead, March on Harrisburg will continue to sit down, whether around the negotiating table or in nonviolent occupation.